Societal and Economic Implications of Floods

Floods are consistently ranked among the most costly natural disasters around the world, with many billions of dollars in damages reported annually. For example, the Centre for Research on the Epidemiology of Disasters International Disaster Database (EM-DAT) reports that floods accounted for four of the ten most deadly natural disasters in 2013, with confirmed global fatalities exceeding 9500 people (EM-DAT, (2013)). The same 2013 report documents $54 billion in damages directly related to river floods.

During late spring and summer of 1993 heavy rains all throughout the Midwestern US resulted in flooding along the upper Mississippi and Missouri river systems. The floods were the most costly in US history, causing about $15 billion in damages and forcing about 75,000 people from their homes. Heavy rains from Tropical Storm Irene in August 2011 caused approximately $10 billion in damages throughout the Caribbean and eastern United States (including flooding Kingston, NY during the wet period indicted in Figure 1). Notably, the numbers of fatalities associated with these extreme events were relatively low (~50 deaths each) due to remarkably accurate flood forecasting, highly effective emergency response systems and regulations that limit development in flood-prone areas. 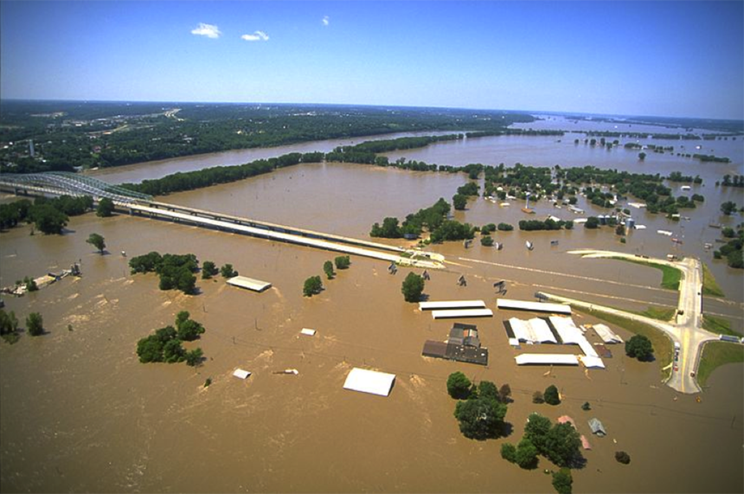 Rivers that cannot transport their sediment load (sand and gravel) are particularly susceptible to flooding because sediment settles out in the river bed, causing the river channel to become shallower relative to its banks, thus increasing the chances of flooding. The Yellow River in China is one example of such a river. While the Yellow River has played a pivotal role in the Chinese economy for thousands of years, sedimentation has repeatedly caused the river channel bed and banks to actually build up higher than the surrounding floodplain. This is an especially dangerous situation that can cause the river to catastrophically flood, breach its banks, abandon its channel altogether, and ultimately form a new channel elsewhere within the floodplain, a process known as an avulsion. The Yellow River has caused many devastating floods, including a flood in 1332-1333 that killed an estimated 7 million people. Another Yellow River flood in September of 1887 inundated an estimated 130,000 km2 (50,000 square miles, an area approximately the size of Alabama!) and killed an estimated million people. Yet another flood in 1931 is estimated to have killed 1-4 million. Such catastrophic disasters have earned the Yellow River its nickname, 'China's Sorrow.'

Humans have made extraordinary efforts to reduce flood damages. In some cases these efforts involve limiting development in flood prone areas. In other cases, these efforts involve building structures meant to control the flood waters. Flood control structures include dams and retention basins that store water and/or building levees, dikes, and flood walls that attempt to keep flood waters confined. Some of the most extensive flood control systems in the world include the floodway diversions on the Red River, which runs between Minnesota and the Dakotas and crosses the US-Canada border into Manitoba.

While we typically think of floods as dangerous and costly natural hazards, they can also provide benefits to society. For example, floods naturally deliver fresh, nutrient-rich sediments to their floodplains, which have historically benefited farmers in many places throughout the world. Yearly floods of the Nile River allowed the early Egyptian people to grow crops, which helped them thrive as a civilization for thousands of years. However, the severity of the floods was unpredictable and floods that were too large caused significant damage. Therefore, in the mid-1900s the Egyptians constructed a flood-control dam on the Nile River. The dam eliminated both the risks and benefits of annual flooding and therefore agricultural practices have had to adapt by using irrigation and petroleum-based fertilizers to replace the water and nutrients that are no longer delivered to the floodplain by the river.

Flood control is not always feasible, given the unpredictable nature of these events as well as geographic or economic constraints. Nor is flood control necessarily desirable in many situations, given the potential environmental benefits for the river and floodplain discussed at the beginning of this section and discussed in greater detail towards the end of this section. In such cases, efforts can be made to reduce economic losses that from floods. For example, in many places regulations limit construction of permanent buildings on floodplains. Emergency response programs, such as the National Weather Service and Federal Emergency Management Agency (FEMA) help flood victims by improving methods to warn and evacuate people from flood-prone areas and to provide relief aid. In an alternative approach, communities in Tonle Sap, Cambodia have constructed their houses on floats and stilts to deal with annual flooding of 8-9 m (26-30 ft) from the Mekong River. 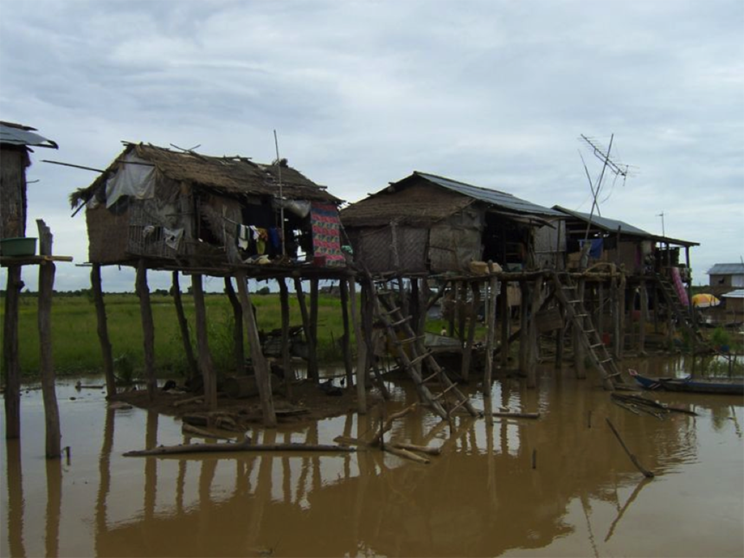 In many places, flood insurance can be purchased to help cover costs associated with residential and commercial flood damages. However, the private insurance industry is somewhat limited because the number of potential claimants far exceeds the number of people who wish to insure their property against flooding. As a result, the US Congress created the National Flood Insurance Program in 1968. The program is an effort to provide flood insurance to protect homeowners, renters and business owners as well as an effort to encourage communities to adopt flood risk management policies established by FEMA.