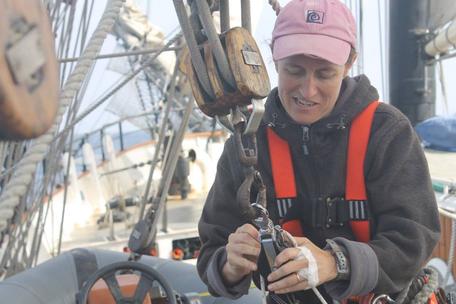 Provenance: Lisa Gilbert, Cabrillo College
Reuse: This item is offered under a Creative Commons Attribution-NonCommercial-ShareAlike license http://creativecommons.org/licenses/by-nc-sa/3.0/ You may reuse this item for non-commercial purposes as long as you provide attribution and offer any derivative works under a similar license.

An intermediate-level course for majors and non-majors.

Two 75-minute classes and one 3.5-hour lab
per week

GEOS210/MAST11: This course examines ocean and coastal environmental science issues including carbon dioxide and the ocean's role in climate, El Niño and other ocean-atmosphere oscillations that influence our weather, coastal erosion and other hazards, coastal pollution, and fisheries. The focus is on controlling processes with regional comparisons. Blue water oceanography is conducted in the Atlantic and comparative coastal oceanography includes trips to southern New England shores, and the West and Gulf coasts of the United States as part of the Williams-Mystic program.

A desire for interdisciplinary problem-solving skills is one of the reasons students apply to study for one semester at The Maritime Studies Program of Williams College and Mystic Seaport (Williams-Mystic) from all over the country. While students learn approaches from science, policy, history, and literature at Williams-Mystic, teaching the Systems Thinking Module was an explicit effort at teaching students systems language, diagrams, and modeling. The ability to solve complex problems using systems thinking develops over time. Half of the group completed the entire module and was very engaged in and excited by complex problems. Half of the group completed only one unit, and while they showed improved confidence with systems diagrams, the ones not previously exposed to systems thinking did not generalize beyond the examples given.

My students were very engaged in using systems thinking to approach ocean change, from conceptual diagrams to modeling.

The examples in the module were easily modified to fit the topics of my course. Even the examples that at first seemed unrelated, such as the MPR piece about wildfires in Minnesota (Unit 1), were an excellent opportunity for students to think about climate teleconnections with the ocean.

The Williams-Mystic semester is 17 weeks long and for many of the activities and experiences the class is all together—that is, the Oceanographic Processes and Marine Ecology students are not separated. Week 1 is spent in preparation for going to sea. Weeks 2 and 3 are spent at sea on an oceanographically-equipped tall ship, learning to sail, learning the tools of an oceanographer, and getting a sense of life at sea as context for the rest of the semester. Weeks 4, 5, and 6 are spent out and about in southern New England, learning coastal field tools and refining research questions in preparation for writing a proposal. Weeks 7 and 10 are spent on coastal field seminars to the Pacific Northwest and southern Louisiana, respectively. During the remaining weeks, students devote about 50% of their time for the course on their independent research projects. I work with them individually or in pairs to move from proposal to data collection to analysis, and students produce a written report and give a conference-style presentation.

Unit 1 was completed by the whole Williams-Mystic class, both Marine Ecology and Oceanographic Processes students (n=17) at the end of Week 9. Unit 1 was the first hour of a three-hour class on sea level rise used to help prepare students to make observations in Louisiana.

Units 2–6 were completed during the last 7 weeks of the semester, Weeks 11 through 17.

Unit 1 was 50 minutes of class. Students cited the radio piece as especially important to their learning.

I started with a pre-instruction knowledge survey and ended with the same survey. Students' confidence with systems thinking increased in the 50-minute Unit 1.

Unit 2, Part 2 was about 45 minutes of a class about coastal eutrophication. I asked students to assess key impacts of coastal eutrophication using Bricker et al. (2003) classification and Bricker et al. (1999) data; the class was divided into Pacific, Gulf, and East coast groups. Which estuary will be most vulnerable to eutrophication in the face of changing climate? Students then did a gallery walk activity for eutrophication diagrams. We then discussed which estuary would be most vulnerable to climate change. And, did the system diagrams gallery walk change your thinking?

We had significant Internet issues during this period, so many students had not done the pre-class work. Luckily, I had brought copies of the ISEE player and models on thumb drives for students to download during class. We did Units 3 and 4 during class; students worked in pairs. We started by labeling a system diagram activity: adding measurable quantities to the Water Cycle. Then, I did preview of STELLA/ISEE Player.

Units 3 and 4 took about 45 minutes in class, combined. The Bathtub model 3 activity worksheet took students about 20 minutes including reflection and discussion. Between Units 3 and 4, we had a 7-minute discussion about which conceptual model best represents Earth's climate system, a think-pair-share (material not from this module). Then, in about 15 minutes, students completed Bathtub model 4 worksheets and reflection.

I pre-empted the unit today with some information about the satellite sensors. Unit 4 homework as a 15 minute in-class activity. The, we discussed the seasonality of sea ice for 12 minutes, looking at summer minimum extent data, feedbacks with hurricanes, applications to the Northwest passage, and international marine policy. One student asked "How does the decrease in sea ice affect polar bears?" and we discussed the Arctic food web and the polar bear's feeding strategies. Then we moved on to a larger discussion of heat. I prompted the class to vote on the question, "Which holds more heat: the ocean or the atmosphere?" (4 said ocean; 2 said atmosphere; one student refused to vote). We discussed the heat capacity of water, trends in atmospheric water vapor and implications, and cloud feedbacks. Finally, for 13 minutes in class, students completed the heat balance exercise, which I modified slightly from Unit 5, Part 2.

I've been using the Unit 6 activity as my last class period for over a decade, and students have very positive responses to it. Because my class is small, I give only a brief introduction and then let them figure it out as I walk around. With a larger class, I imagine I would do a full demonstration of the three parts of the activity (i. Find a partner, ii. Discuss answers to your review question and your partner's review question, iii. Write some of the possible connections between the two topics, iv. Move on.) Students moved around the room, pairing up 5–6 times in 40 minutes, and I acted as a member of the class since I have an odd number of students. During the 15 minute follow-up discussion, I drew the complex connections on the board and made a big mess, but it drove home the point that everything is related.

The summative assessment was 25% of my final exam.

I used knowledge surveys, polling, worksheets, and exam questions to assess student learning. Students were especially receptive to the knowledge surveys which had them both focus on the learning goals at the start of class and self-assess their progress. I do not normally use worksheets in class, so those were the most incongruous, but students responded well to the scaffolding for modeling that the worksheets provided. Several students came to me and said that the summative assessment and another question on my exam (asking them to design an interdisciplinary capstone assignment) were the two best questions they had ever been asked on an exam and the most fun.

My students stated that they believed that they had met all of the goals at the end of the semester.

The module exceeded my expectations and goals in one important way: I came to value modeling as an accessible tool for students. Previously, I had taught individual students MATLAB to make models, but only those who had the inclination and experience to do so. Using the ISEE player opened my eyes to new possibilities in class and for student research projects.