These student materials complement the A Growing Concern Instructor Materials. If you would like your students to have access to the student materials, we suggest you either point them at the Student Version which omits the framing pages with information designed for faculty (and this box). Or you can download these pages in several formats that you can include in your course website or local Learning Managment System. Learn more about using, modifying, and sharing InTeGrate teaching materials.

Unit 1: Impacts of Land Use

You have spent time in this unit making observations of both non-agricultural and agricultural landscapes, exploring their similarities and differences, and how the obvious physiographic impacts of agricultural land use compare to un-impacted non-agricultural ("natural") land. Take some time now to look at the bigger picture – In making observations of the impacts humans have interacting with the landscapes you observed you are observing the interaction of the biosphere (where all life exists) with the geosphere (the physical earth). If you observed that rainfall or the weather and climate may have impacted the landscapes then you were observing the interaction of the hydrosphere (where water exists) and the atmosphere with the geosphere. These spheres are all parts of the Earth System and, as you observed, they all interact with one another. See if you can make some more connections.

For each photo below, place the letter of each Earth System sphere you observe in that photo in the blanks beneath that photo (it may help to first read the photo captions). Use only the spheres that you can actually see (you cannot see air). You may not necessarily use all of the blanks under each photo. Then draw lines connecting the letter of each sphere to other spheres with which it is interacting. 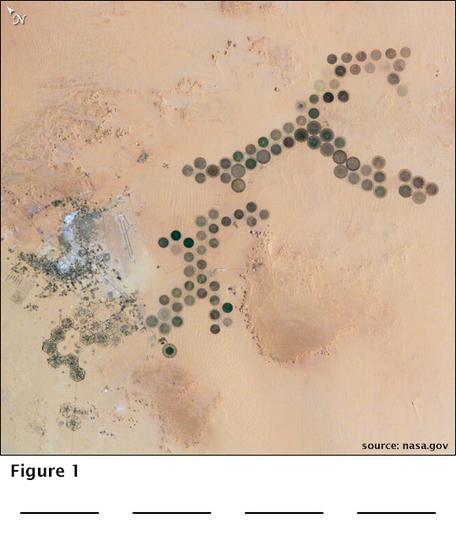 Hide
Figure 1: Green circles in the desert frequently indicate tracts of agriculture supported by center-pivot irrigation. The Al Khufrah Oasis in southeastern Libya (near the Egyptian border) is one of Libya's largest agricultural projects, and is an easy-to-recognize landmark for orbiting astronauts aboard the International Space Station. Because only about 2 percent of Libya's land receives enough rainfall to be cultivated, this project uses fossil water from a large underground aquifer. The Libyan government also has a plan called the Great Man Made River to pump and transport these groundwater reserves to the coast to support Libya's growing population and industrial development.

The center-pivot irrigation system pumps water under pressure into a gantry or tubular arm from a central source. Anchored by a central pivot, the gantry slowly rotates over the area to be irrigated, thereby producing the circular patterns. Although the field diameters vary, these fields are approximately 0.6 mile (1 kilometer) in diameter. Darker colors indicate fields where such crops as wheat and alfalfa are grown. Lighter colors can indicate a variety of agricultural processes: fields that have been harvested recently; fields that are lying fallow; fields that have just been planted; or fields that have been taken out of production. 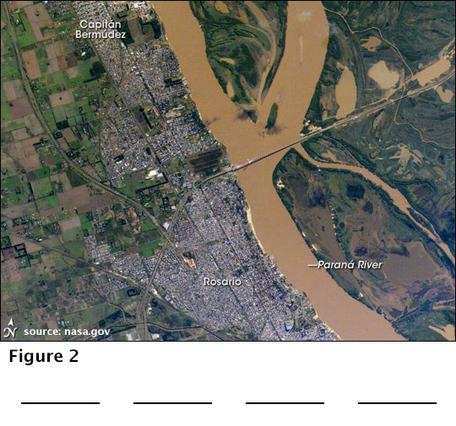 Hide
Figure 2: The Paraná River appears as a wide, blue strip with the muddy brown water of the smaller Verde River entering from the northwest (top left). An extensive wetland (dark green) occupies most of the left half of this astronaut photograph, and the floodplain reaches a width of 11 kilometers (about 7 miles). The thin line of a road crossing the floodplain also gives a sense of scale. Above the Paraná-Verde confluence (image center), the floodplain is much narrower.

The floodplain is generated by sediments delivered by both rivers. The evidence for this is that the entire surface is crisscrossed by the wider traces of former Paraná River channels, as well as numerous narrower traces of the Verde. The floodplains along both rivers are bordered by numerous rectangular agricultural fields. The dominant crops along this part of the Paraná River are coffee, corn, and cotton.

Turbid water, such as that in the Verde River, is common in most rivers that drain plowed agricultural land, as some topsoil is washed into local rivers after rains. A long tendril of brown water extends from the Verde into the main channel of the Paraná, where it hugs the west bank and remains unmixed for many kilometers. This effectively shows the direction of river flow from orbit: right to left for the Paraná, and upper left to image center for the Verde. 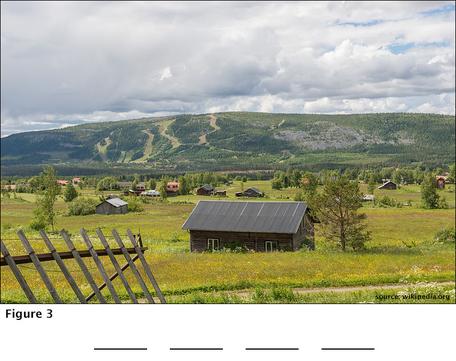 Did you observe that any of the spheres was not interacting with any or all of the other spheres in a photo? If yes, explain how this is possible. If no, explain why this is. Wrap up by picking the pathway that connects two Earth System spheres (as shown on one of the photos) that you think is the most important to sustain life on earth. Briefly reflect on and discuss why you think it is the most important pathway and what you think humans can do to keep these two systems interacting in a sustainable manner.