Overlap and Transition in Food Systems

As a final observation about ourselves as consumers within different food system types, it is important to stress that most consumers and households participate in multiple types of food systems at once. For example, someone in a modern society might consume a breakfast energy bar with globally sourced processed ingredients, along with a fair-trade certified cup of coffee and regionally sourced milk, on the way to picking up sweet corn at a direct-marketing farm stand of a local farmer. In addition, and of special importance for thinking about sustainable scenarios for your capstone project, it is important to find explanations of how transitions occur in food systems from one type of predominant system, to the inclusion of alternatives, or in some cases a wholesale change from one food system type another.

Human-Natural Interactions as Drivers of Food System Variation and Transitions

Recall that in Module two we presented the broad strokes of the history of food systems, from prehistoric times to the modern day, including the globalized and local-regional variants of alternative food systems that were featured on the previous page of this module. In module two, we presented the idea of drivers and feedbacks that have caused large changes in the environment-food relations over human history (for example, from hunting and gathering to agriculture). In this final page of module 10.1 we want to develop concepts that constitute Coupled Human-Natural Systems explanations or "ways of seeing" that can help to understand two different processes:

Both of these ways of seeing may be useful in understanding proposals for sustainable food systems, as well as the issues of resilience and vulnerability of food systems presented in the next module.

Regarding process (1) above, The fact that food systems develop over time due to the interactions of human and natural systems means that different food systems can develop in the same natural system environment. For example, the same environment or natural system can support either a smallholder type of food system (small plots, less mechanization, local consumption) or a global corporate food system (larger land sizes, more mechanization and industrially-produced soil inputs, global distribution and consumption). It can also support a mosaic of the two types. This overlay of two types is in fact fairly common: for example, smallholder agriculture on smaller plots for mixed home and regional consumption coexists in Central America with the export agriculture of major food commodities such as bananas or vegetables, and often involves marginalization of smallholders to smaller landholdings in less productive and more difficult to manage soils. This mosaic of food system types is also increasingly true in Southeast Asia as globalized agriculture for cassava and maize production for export to China as well as domestic consumption coexists with more traditional smallholder agriculture as portrayed in the Vietnamese "VAC" system in the introductory video for this module. Figure 10.1.19 shows how two parallel food systems can develop in the same environment according to the Coupled Human-Natural System diagram we have seen at other points in the course. Starting at "time 0" in the middle we can see how an initial food system type might develop via human system management (e.g., the smallholder system in the Central American or Southeast Asian case). At "time 1", meanwhile, differences in the human system (say marginalization of smallholders to certain environments, investment in industrial farming in other environments) have created two divergent food system types. These divergent types then develop on their own through times two and three, and into the future, incorporating interactions between human and natural systems that embody the issues of social, financial, and environmental sustainability. As we can see by the Central American and Southeast Asian examples, this parallel trajectory of two different food system types is highly relevant, since it represents exactly what has happened in developing countries that seek to industrialize their agricultural sectors but retain a large rural population practicing smallholder agriculture, often in more marginal regions with greater heterogeneity of environments (e.g. mountainous areas of Central and South America, mosaics of large export-oriented farms alongside smallholder agriculture in South and Southeast Asia as well as Eastern and Southern Africa) 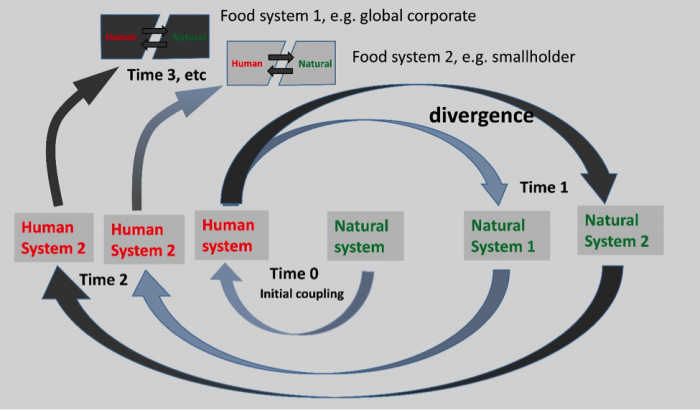 Regarding the transition from one food system type to another (process 2 as listed above), the CNHS diagram (figure 10.1.20 below) can help to understand these transitions. As an example, we'll use the transition to alternative food systems from the globalized industrial food system we described in module two and again in this module. In figure 10.1.19, between the "initial coupling" point at center and "Time 1", expansion of a dominant food system begins to create strains on both the natural and the human components of the system. In the case of the globalized industrial food system that emerged in developed countries (sometimes called the global north) after World War II, this system eventually created strains in the natural and human systems and a critique responding to the unintended consequences of the expansion of this industrial and globalized model. You'll recognize these strains and critique as the same issues of sustainability discussed in the previous modules:, "diseases of affluence" from poor nutrition, food insecurity, concerns about water use and the water footprint of food, soil degradation, pest and weed resistance to pesticide and herbicide management, and others. Between Time 1 and Time 2, the human society thus receives signals from the interactions and drivers within the coupled system, and then responds, in the form of a wide range of new policies and "models" of the new system that emerge during Time 3. In some cases, these responses are modest, for example, a new regulation on fertilizer or pesticide application to moderate the unintended negative consequences. In other cases, the responses are more dramatic and become the alternative food system types described in this module, both global and community-based. These different variants of the transition may increasingly create aspects of a "complete" food system, e.g. production, distribution, and consumption pathways in an integrated whole, as compared to their initial state as outliers, regulations, or policy proposals. Through different drivers and feedbacks from the natural and human sub-systems, a transition to new food system types occurs. These new types often coexist with a more dominant food system, which is certainly the case with the coexistence of alternative food systems in the present day with the still-dominant global corporate food system. 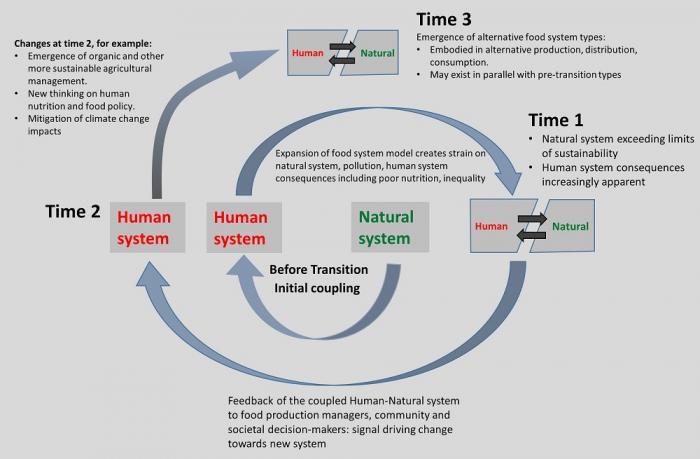 ×
Fig. 10.1.20. A model of the way that a crisis in the social and environmental sustainability of a food system can drive a transition to a new type of food system, considered as Coupled Human-Natural Systems (CNHS). See text for more detailed description and example of this process.
Credit: Steven Vanek and Karl Zimmerer, based on the National Science Foundation Coupled Human-Natural Systems program.