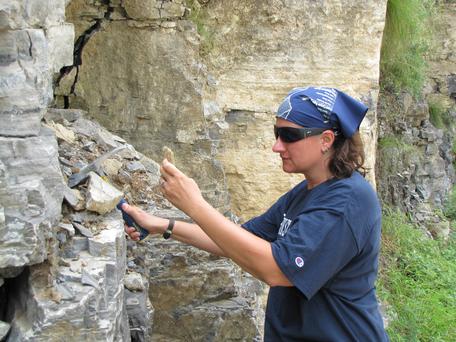 An introductory level course primarily made up of civil engineering majors and a few petroleum engineering majors.
40
students
Two 55-minute lectures and one 3-hour lab
per week
Small, public 4-year university
, that is one of the 24 campuses that create The Pennsylvania State University, a large research university.

Hide
Physical Geology is an introductory level course about Earth, with emphasis on its composition, structure, and dynamics. Students learn about rocks and minerals, the building blocks of the continents, oceanic basins, and about the processes that shape Earth, including climatic processes. Some of these processes are slow, such as the movements of continents, and change Earth over a period of millions of years. Others are rapid, such as earthquakes and floods. Students learn how these processes interact to create the landscapes we see on the surface of Earth.

I used this module to teach a class of civil engineering students about climate change. This class has a lab component, so, in addition to using the materials during the "lecture" class meetings, I was able to utilize Units 3 and 5 as a lab activity.
Before the start of this module, some of my students did not agree with the concept of anthropogenic climate change. By the end of the module, those students had difficulty supporting their views based on the data graphed by the class.

I spent very little time covering graphing basics, as my students had previous experience creating and interpreting graphs in my class. I ended up spending extra time on concept maps, as my students had a very difficult time creating the concept maps&acirc;&#128;&#148;many students wanted to simply list out the interactions rather than complete the map. Due to the class schedule, the students completed Unit 4 before Unit 3, and the students completed Units 3 and 5 in the same 3-hour lab session.

I taught this module about in the last quarter of the 15-week semester as a means to teach my students about climate change. Before doing this module, the students had previously learned about plate tectonics, earthquakes, volcanoes, minerals and the three rock types, weathering, soils, groundwater, and rivers. Before starting Unit 1, the students read the textbook chapter about climate change and completed a reading quiz on the material.

Unit-by-Unit Breakdown of How I Taught this Module

**Many of my students did not see the value of completing Units 3 and 4 . I suggest emphasizing the importance of different forms of communication (in any field of study) when introducing these units.

The students completed each of the assessments as they are described in each unit. However, while completing this module, the students completed more homework than I typically give in class (the students were not used to doing the extra work). Also, many of my students did not value the readings in Units 3 and 4 and did not read them prior to coming to class. The next time I teach this module, I will most likely give a small "reading quiz" at the start of each class to encourage students to read before coming to class.