Cindy Shellito: Adapting Climate of Change for a Large Lecture Course at the University of Northern Colorado 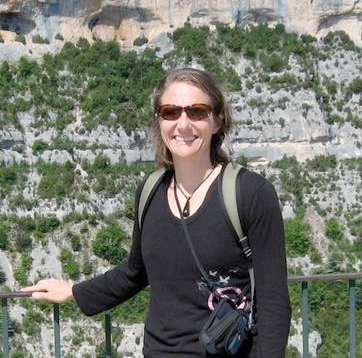 Provenance: Photo provided by Cindy Shellito
Reuse: This item is offered under a Creative Commons Attribution-NonCommercial-ShareAlike license http://creativecommons.org/licenses/by-nc-sa/3.0/ You may reuse this item for non-commercial purposes as long as you provide attribution and offer any derivative works under a similar license.

An an introductory survey course in meteorology and climatology.

Show the description of General Meteorology

This course is designed to help students discover Earth's atmosphere and the forces that drive changes in the weather. Much of the course focuses on helping students understand the basics of daily and seasonal changes in the atmosphere. Students learn about the tools meteorologists use on a daily basis, current weather information online, and the basics of weather forecasting. The course also covers most severe types of weather phenomena, such as tornadoes, thunderstorms, hurricanes, and winter storms, with an emphasis on how to protect yourself during severe weather. Finally, the course delves into short-term and long-term climate changes on Earth, and tries to place present-day changes in the context of what has happened in the past.

The course meets requirements for the UNCo Liberal Arts Core (LAC) Curriculum. Most students take the course to satisfy the LAC. The course is also taken by first-year students or transfer students who are Earth Science majors emphasizing in Environmental Science, Secondary Education, or Meteorology. Geology emphasis majors are not required to take this course.

Students began the Climate of Change module after 10 weeks of instruction in introductory meteorology. Students were familiar with factors that drive weather, concepts such as radiation, stability, seasons, global general circulation, and circulation in midlatitude storm systems. Students had experience contouring and reading weather maps and were familiar with the process of weather forecasting.

Key content areas in this course include the following:

How often does a lecture hall full of students in an introductory science class buzz with energy? In my nearly 10 years of teaching introductory meteorology, I can say it has been rare. The activities in the Climate of Change module had students in my introductory-level General Meteorology class up and out of their seats, looking at and discussing the same data that scientists use to understand climate variability and climate change. This module prompts students to consider the broad-ranging societal impacts of climate change in the past, present, and future, and that engages them in science.

The activities in the Climate of Change module had students in my introductory-level General Meteorology class up and out of their seats, looking at and discussing the same data that scientists use to understand climate variability and climate change.

Using the Climate of Change module in a lecture hall forced me to think about how to use my classroom space in new ways. It allowed me to find ways to better align my teaching in a lecture hall with the things that I value most in teaching and learning science: engagement, inquiry, and problem solving.

The module was implemented during the 11th and 12th weeks of the semester. Students were accustomed to a lecture format during the 50-minute class period, interspersed with occasional short in-class activities or discussion. Starting about a week prior to the beginning of the module, students were told in class and in lab that the format of the class period would be changing for a couple of weeks, and to be prepared to participate. I used supplemental materials for each unit in the lab section of the class.

UNIT 1: Forecasting Climate Variability and Change: A Matter of Survival

The activity in Case Study 5.1 is a challenge in a large class but worth the effort! On the day that I did this activity, there were only 38 students present. Students really need space to move around, so if you have a big class, you might look into the possibility of moving into a larger room when you do Unit 5. It is also helpful to have a TA or another professor present to help answer questions and direct students. If finding larger room is not possible, consider finding another way of doing the climate modeling game that does not involve having students move around very much (perhaps have them do the personality quiz ahead of time, then form groups with the people sitting nearest to them).

How this worked in my class:

UNIT 6: Adapting to a Changing World

My hope in implementing the Climate of Change module was that students would become engaged in the topic, become active learners in the classroom, and more easily understand the complex interactions that occur as a part of climate variability and climate change. Students commented favorably at the end of the semester about the opportunity to move around the class and discuss ideas in a large lecture hall. While I did not have a control group to compare this class with, responses on exam questions from students who were present for the activities in the module suggest that it accomplished what I had hoped for.