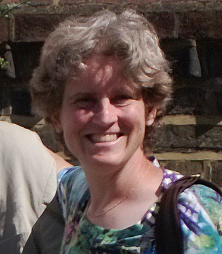 This is an Earth science class for education majors preparing to teach science for students in grades 4–9 (aged about 9 to about 14 years). It emphasizes interactions among Earth's systems.

Hide
Processes that impact the Earth system such as volcanic eruptions, global climate change and ice ages, and the resulting interactions between air, land, water and life in the Earth system.

Hide
The objectives of this course are to enhance aspects of a student that are vital to becoming a successful, effective middle-school science teacher:

My students are preparing to teach science themselves and are expected to learn through inquiry. This course is intended to address a number of major themes in middle-grades science standards, and to emphasize approaches and topics that are especially challenging, like systems thinking and Earth history.

This module offers an important hook for Earth history: the current mass extinction resulting from multiple modern ecological crises including climate change, invasive species, and habitat destruction. Systems thinking is vital to understanding the chains of cause and effect that drive both ancient and modern mass extinctions. My students were very interested in the similarities between ancient and modern disasters.
The students brought their own interests and questions to the module, from the decline in bee populations to the origin of new species, and focused on learning more about these.

I did not use Unit 3. Since this was an Earth systems course, my students had a number of opportunities to practice analysis of interactions among the biosphere, geosphere, etc. in other course components.

I had a small class of students who are preparing to become teachers for grades 4–8, licensed to teach science and another subject (math, social studies, or language arts). It ran from 9:05-11:35 twice a week, and usually started with a lecture and then moved on to group research culminating in a presentation. I used five of the 50-minute Changing Biosphere modules in the place of several of those lectures, spread out over several weeks (9/15 to 11/3). After we finished the module, each student group developed and presented a mass-extinction project.

*Note: revisions made after piloting re-ordered the units and some materials that were used. Changes indicated parenthetically below.

For Unit 1, in the third class meeting, I had to go from group to group and facilitate discussion. In one group, two people were willing to speak without prompting, but for the other two, one person would give an answer, and the other two would look mutely at him or her, assuming that once one person had spoken that they were done. So I pointed out that "discussion" required more than one voice, and then asked a second person to answer the question. In neither of the other two groups was the second student able to paraphrase the first answer by then, so the first speaker spoke up again, this time addressing the second. In the meantime, members of the first group were still talking to each other, and our 2 minutes were up. It felt like had to repeat this process every slide for one of the groups. This was something I had to do with all of the in-class work for the first few weeks, to keep the quieter students talking to their teammates.

I knew roughly which students were likely to do the reading carefully and which ones were not, and I made sure to put the less-motivated students into different reading groups, so that I could assign them to work together if they had not prepared (quiz scores told me which ones had not prepared). The less-prepared students could not really discuss the articles, so they just sat at the same table and read through them, taking notes on the questions the first round of the jigsaw, treating it as a worksheet. By the second round, they made an attempt to work in pairs with other students, having reviewed the reading.


The students who did very well on the quiz were grouped together for the first phase of the jigsaw, but they pulled out the reading and looked at it again to answer questions raised by people who had different answers.

What is now Unit 3 was not used.

All but one of the students finished the worksheet and answered the questions correctly. Two of the students had wondered (on the homework for Unit 1) where new species came from after a mass extinction, so Unit 4 should have answered that question.

Unit 5 (this material is no longer part of this module)

Within a few weeks of non-InTeGrate cooperative work, the students got to know one their teammates, and got a lot of practice talking to each other. By Unit 5, almost six weeks after Unit 1, none of the groups needed prompting to talk to each other for the entire time allotted for the project, and my job as facilitator was to answer questions about birds and ecology.

There was a lot of discussion in the groups, and the students were very independent, needing little facilitation. Several were also using Earth-systems language, and noting connections between climate change and extinction.

On the homework for Unit 1, I was happy to see that each student had his or her own opinion on biodiversity patterns and could justify that opinion, even if it was only in a limited way. Several also explained how multiple people could look at the same data and draw different conclusions about what it meant. On the content post-test I do for my class, the Fall 2015 section showed a substantially higher gain on a question about placing events on a timeline than the previous section. On the homework for Unit 3 (now Unit 2) and Unit 6 (now Unit 5), students also had their own opinions on the course material, which generally differed from those of their teammates.

Overall, the module connected the themes of the various subjects of the class, which in turn had been chosen because studying those topics would prepare students for the licensure test they had to take and the standards they had to teach. During this class, students examined volcanic eruptions, global warming, and recent discoveries about Mars and analyzed them using systems thinking. It has always been tough to get them to use a systems-thinking approach on Earth history topics because they tend to think about extinct animals and ancient supercontinents as starting points for processes that led to the present, not as the results of such processes.

This year, I felt like the final project on mass extinctions (non-InTeGrate, done after Unit 5) used a little more cause-and-effect language than past projects on Earth history. The students were examining events, rather than animals or shapes on maps, and they had built up enough of a background over the term to think about why these extinctions happened.