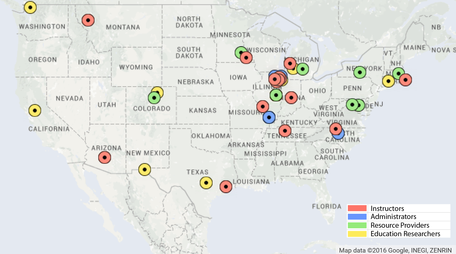 Provenance: Xai Her
Reuse: This item is offered under a Creative Commons Attribution-NonCommercial-ShareAlike license http://creativecommons.org/licenses/by-nc-sa/3.0/ You may reuse this item for non-commercial purposes as long as you provide attribution and offer any derivative works under a similar license.
Participants for the four focus group meetings were chosen to represent a diversity of viewpoints that could generate rich conversations about broadening participation in the geosciences at MSIs and 2YCs. Targeted recruitment was used for all four meetings. In total, 40 individuals from 34 different institutions and organizations located in 16 states participated in the meetings. A total of 8 MSIs, 11 2YCs, and 15 4YCs were represented. See our participant list (Acrobat (PDF) 21kB Jun7 16) for names of attendees and their institutions or organizations.

Each focus group meeting was framed as a gap analysis in order to identify the current state of geoscience instruction at 2YCs and MSIs, articulate the desired state, and brainstorm about resources, programs, infrastructure, and other support needed to attain the desired state. Participants also considered the broader context of the geoscience community as it relates to broadening participation. To facilitate out-of-the-box thinking, a series of activities guided brainstorming and discussion of how key stakeholders might interact to bring about this desired state. An "ideal model" methodological approach was used to compare the current level of interaction between stakeholders with the desired state of interaction. Finally, participants individually responded to guided prompts in order to implement what they learned in their own contexts to help the community reach the desired state. Discussions and participant-authored web pages were recorded on our private workspace. The 2014 NSF-IUSE Ideas Lab, the 2105 Earth Educators Rendezvous hosted by NAGT and InTeGrate, and the 2015 ENGAGE meeting hosted by IRIS greatly informed the planning, organization, and execution of the meeting as well as specific activities. 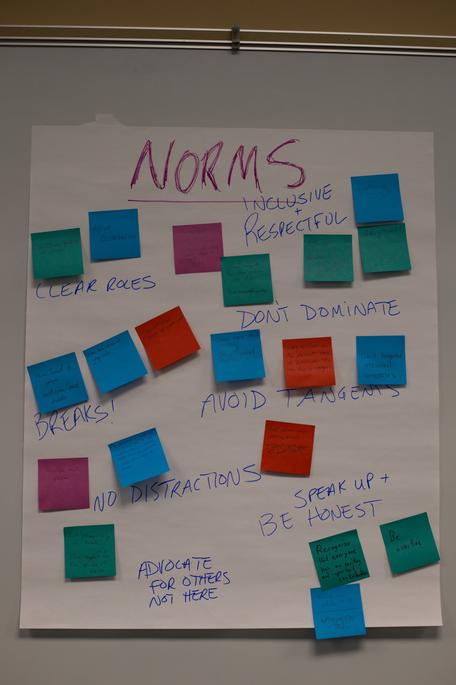 ×
Team norms as proposed by participants in the Instructor-Administrator focus group meeting.

Provenance: Xai Her
Reuse: This item is offered under a Creative Commons Attribution-NonCommercial-ShareAlike license http://creativecommons.org/licenses/by-nc-sa/3.0/ You may reuse this item for non-commercial purposes as long as you provide attribution and offer any derivative works under a similar license.

Prior to their arrival at each meeting, participants were asked to review a few resources relevant to the meeting goals and to individually prepare responses to questions. Resources and questions were available on each meeting page. Resources included reports, websites, journal papers, and videos related to diversity in the geosciences.

The initial evening activity was chosen to set a welcoming tone immediately at the start of each meeting and to communicate the goals, meeting structure, and agenda to participants. The icebreaker was held in a private room located at a nearby restaurant. After a presentation of the project goals, participants responded to prompts on Post-it notes. Prompts were slightly different between the two meetings to accommodate the differing participant contexts and meeting goals. After individual writing, participants stuck their completed notes onto large pieces of paper placed around the room. We then invited participants to walk around and view the notes, then to ask one another questions about what was written on the notes. In both meetings, this activity generated lively discussion and an opportunity for individuals to compare their personal and institutional contexts.

To set a tone of collaboration and respect, on the first morning of the meetings, participants were invited to pair with a neighbor and write on a Post-it note two possible norms that would guide interactions between group members during the Geo-Needs meeting. Participants then read the norm aloud to the group and added it to a poster. The facilitator grouped similar norms together as they were collected, and invited the group to create a collective name for similar norms. We believed that allowing the participants to generate expectations for behavior would not only produce more authentic norms, but also encourage the participants and project leaders to live up to the expectations.

During the Meeting: Prompted Discussions, Gallery Walks, and Guest Speakers 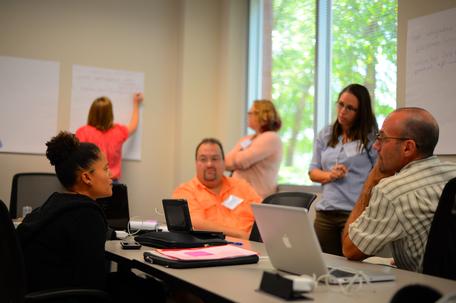 ×
Participants sharing ideas in a small group discussion during the Geo-Needs meeting.

Provenance: Xai Her
Reuse: This item is offered under a Creative Commons Attribution-NonCommercial-ShareAlike license http://creativecommons.org/licenses/by-nc-sa/3.0/ You may reuse this item for non-commercial purposes as long as you provide attribution and offer any derivative works under a similar license.

The Gallery Walk method permits a combination of individual reflection and group discussion. The meeting facilitators wrote question prompts on large sheets of paper, which were hung at intervals around the meeting room. Participants went to each poster and individually wrote responses to the questions or comments on other participants' responses. In a variation on this activity, participants used Post-it notes or stickers to comment on the written responses. Participants then reported common ideas or themes within each poster, which in turn was used to generate discussion, which was recorded on the web space. 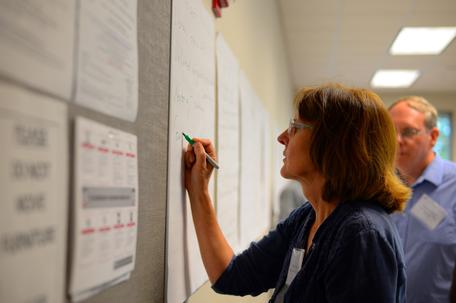 ×
Participants sharing ideas in a gallery walk during the Geo-Needs meeting.

Provenance: Xai Her
Reuse: This item is offered under a Creative Commons Attribution-NonCommercial-ShareAlike license http://creativecommons.org/licenses/by-nc-sa/3.0/ You may reuse this item for non-commercial purposes as long as you provide attribution and offer any derivative works under a similar license.
Guest speakers were brought to the meetings to share new perspectives that could prompt creative new approaches to broadening access to the geosciences at 2YCs and MSIs. Each focus group meeting had between two and four guest speakers, most of whom were also meeting participants. All four meetings included a presentation by Jill Karsten, a program officer in the NSF Directorate for Geosciences, intended to alert participants to potential funding sources. At the Administrator and Instructor meetings, David Voorhees and Lorrie Stahl from Waubonsee Community College shared their experiences and perspectives on building their geosciences program. In the Resource Provider meeting, Jeffrey Froyd from Texas A&M University, presented a talk intended to give attendees researched-founded suggestions for how to develop, market, and implement educational programs most effectively. Two guest speakers delivered talks at the Education Researchers focus group. Lorenzo Baber from Iowa State University discussed his role as an education researcher partnering with geoscientists to study student participation in a program designed to recruit students into the geosciences. Caitlin Callahan from Grand Valley State University discussed how social capital theory can be appropriated for studying diversity in the geosciences.

At the conclusion of each focus group meeting, participants were asked to individually respond to prompts in the private online work space. They were also asked to reflect on what they had learned and to list steps they would take when returning to their institution or organization to implement what they had learned in an 'action plan.' Participants were asked to share points from their action plans at the final discussion of the meeting.