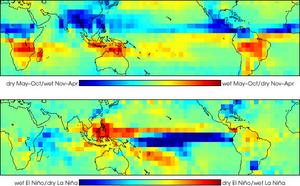 Hide
Scientists at NASA's Jet Propulsion Laboratory and Goddard Space Flight Center used five years of rainfall observations collected by the Tropical Rainfall Measuring Mission satellite to identify the strongest influences on global rainfall patterns. The two major players in global precipitation are presented in the maps above: seasonal change (top) and El Niño-la Niña cycles (bottom). Blue and red areas are like opposite sides of the climate coin. When one area is wet, the other is dry. Green areas show the smallest changes from season to season and year to year. Image Source: NASA
Earth's unique weather and climate determine where life will flourish or perish. Too much rainfall leads to flooding; too little leads to drought and famine. Such extreme situations often result in devastation and loss of life. Throughout history, humans have strived to understand patterns in weather and climate. By developing an understanding of the patterns of precipitation, scientists are making possible increasingly accurate weather, flood and drought forecasts. In the case of drought, these forecasts allow water managers to decide how to allocate precious water resources. Conversely, in the case of flood events, careful precipitation monitoring and forecasting can improve strategies intended to prevent damage and suffering.

Ground-based measurements provide the most accurate record of rainfall, but ground stations only record rainfall at a single location, leaving gaps in spatial coverage. Since rainfall totals can vary within a small area, these data gaps make it difficult for scientists to learn about the mechanisms that cause small-scale variations in rainfall. Satellites, on the other hand, provide a "snapshot" of rainfall over a wide area at a given point in time. Satellites don't have the spatial data gaps that ground stations have, but they do have time gaps, as they only see rainfall when they fly over it. Because satellites equipped with passive microwave sensors pass over a region only once every 3-6 hours, precipitation that is light or short-lived is hard to catch accurately.

Satellites are also limited in their ability to monitor certain geophysical regions. Over land, errors in estimates are generally higher near coastal areas and in regions covered in snow and ice. Measurement of rainfall that occurs in relatively shallow clouds, is also likely to have more errors in estimation. Finally, satellites record the average rainfall in a very wide area—at best, four kilometers across. This means that the satellites can easily miss small patterns such as the influence local topography (cities, land cover, etc.) has on rain. 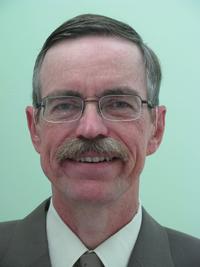 Dr. George Huffman
For the last 18 years, Dr. George Huffman and his colleagues at NASA Goddard Space Flight Center and other research institutions have been trying to obtain a more comprehensive picture of global precipitation patterns by working to create a product that takes advantage of the strengths of multiple satellite sensors in one "best-estimate" product. According to Dr. Huffman, studying global precipitation "means that we try to make good local estimates everyplace on Earth. Generally, that means we spend a lot of time worrying about difficult cases and attempt to patch together a reasonable answer, maybe finding a new data source, instead of just giving up." These "multi-satellite" data sets provide the best perspective by far on the complete record of Earth's precipitation during the satellite era.

NASA's Tropical Rainfall Measuring Mission (TRMM; pronounced "trim") satellite is the most accurate rainfall observing satellite to orbit the Earth. It carries a suite of five instruments that, when combined, allow scientists to gather a very detailed three-dimensional view of rainfall patterns. TRMM uses a combination of active and passive radar measurements to observe the intensity of radiant energy that the atmosphere, land, and ocean emit into space at microwave frequencies and record three-dimensional scans of rain— similar to surface-based radar systems. Together, these data sets allow scientists to build a 3-D picture of rainfall patterns in space and time. These estimates are calibrated by comparing the results to ground based observations, such as rain gauges and radars.

Dr. Huffman says that providing support for data users has taken an increasing amount of time as satellite precipitation datasets have become more widely accepted. These users include drought, flood, and crop analysts; researchers verifying numerical models; climate specialists; political economists (correlating weather and civil unrest); ecologists (tracking bird migrations); and insurance companies (for weather-related losses). Dr. Huffman sees this a great success story. "When we started, scientists only had a general notion of the climatology of precipitation over the oceans and remote land areas. Now, we've got monthly maps that are taken seriously. The twin challenges are to keep improving our ability to squeeze more information out of the satellite data and to apply these (and related) techniques to revise our understanding of the entire record of satellite data, stretching back to 1979."