Future of the Forest 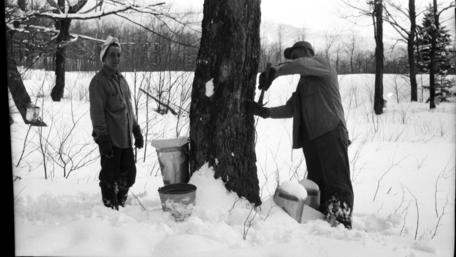 ×
Workers tapping a maple tree in preparation for maple season, winter 1952. Photo from University of Vermont.

Recall the 300-year old maple tree in Vermont, described in Lab 1. How do you think that tree, and others like it, will respond to changing climate? Maple syrup, a sugary sweet food product derived from the maple sugar (Acer saccharum) tree, is an important agricultural commodity in the northeastern and mid-western United States. How will climate change impact the production of this commodity? To answer this question, researchers, farmers, and citizens have carefully monitored the changes in the sap flow every spring for many years.

In this lab, you will view graphs, diagrams, and video clips describing the changes that have been observed by farmers in Wisconsin and Vermont. You will view scientific articles and an interactive that display the potential changes in syrup production.

Learn more about the sugaring process and the climate by reviewing this 3-minute video about a farming family's experiences sugaring in central Wisconsin—Sugaring Wisconsin.

As the climate changes, so do the winter and springtime temperatures. Scientists at Cornell University, near Ithaca, New York, have studied the changes in the onset and duration of the maple sugar season. First, read this short synopsis of their findings: Maple Sap will Flow a Month Earlier.

Next, use the sap flow interactive, below, to explore how the sap flow days may change in the future as the climate of New England changes. The Historic Sap Flow Window is the time period in which the maple sugar season traditionally has taken place in New England. To get a sense of the changes predicted for the maple sugar industry, in the coming century, try the following: select a city and begin with the Present temperature, then change scenarios to see how climate change may shift the sap flow "window" earlier and earlier in the year.

Watch the video clip of a New Hampshire farmer describing his observations.

Some farmers in Vermont, and other regions, have turned to technology in order to increase the production of their maple syrup. While the innovations have increased the amount of sap they can draw from the trees, the concern for the sustainability of the industry in Vermont remains. Read more about the new methods of collection being utilized in this old industry in this article from The Guardian: Sweet science: Vermont maple syrup industry embraces hi-tech tricks.

What observations of climate change do the farmers in Wisconsin and New England have in common? How has the spring run of maple sugar changed during their years of work with the maple tree?

Do you have relatives or friends that work in the out-of-doors or with plants? What can plants tell us about the weather and climate that we might not notice without them? What are the impacts of climate change on plants in your region?