Future of the Forest

Part A: Migration of the Trees 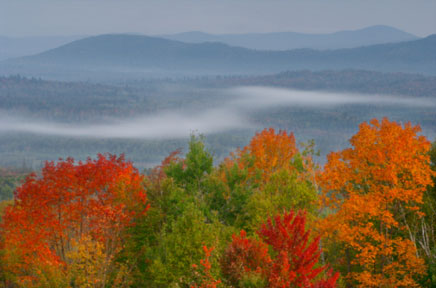 Now that you have looked at past climate indicators, including plant pollen records, and have developed a sense of climate modeling and projected temperature increases, you will put the two together and consider the future of plants in a changing climate.

Plants, including trees, do not truly migrate, rather they disperse their seeds, which, given optimal growing conditions, can take root in new locations. This form of migration is slow, and limited by natural variability such as the wind direction or other transport mechanisms such as birds. The question many plant biologists have is whether or not the plants will be able to adapt or move as rapidly as needed to survive in the changing climate.

Get a sense how much the temperature may increase

First, go to the NOAA Data Snapshots and select the Projections showing the United States.

Next, click Average Temp - High Emissions. Then use the sliders below the map to set the year 2050, and the scroll through the months. To learn more about this snapshot click the words read more in the About this Snapshot box.

Show me the settings to select and the map 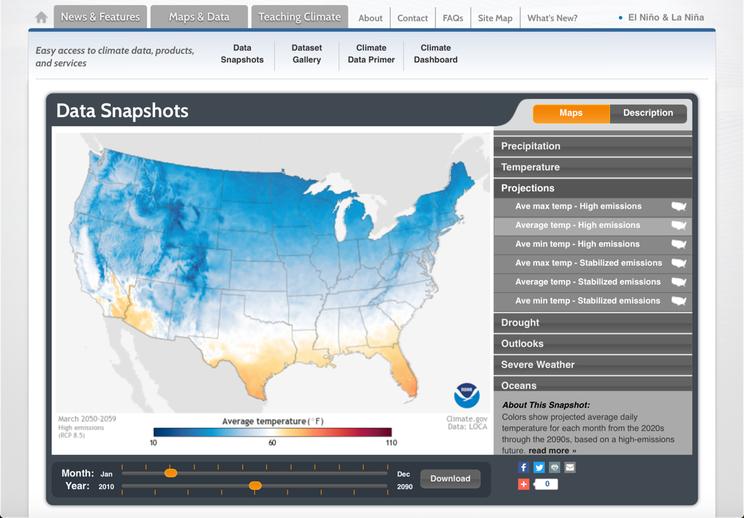 Show me the settings and the map 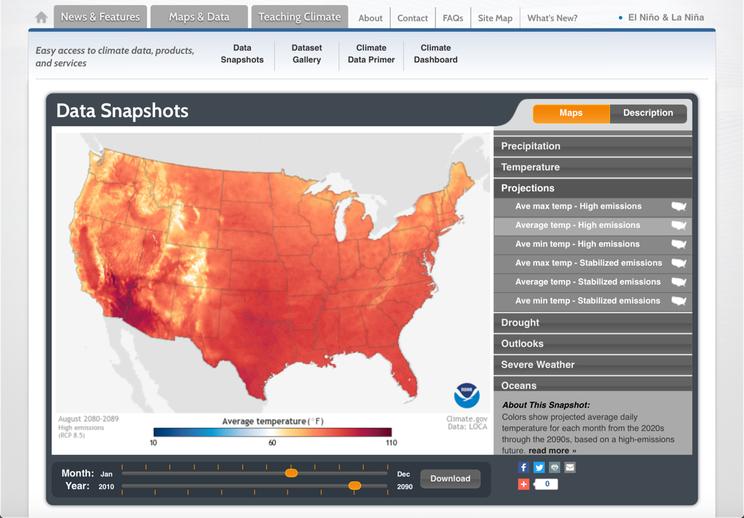 Provenance: Betsy Youngman, none
Reuse: This item is in the public domain and maybe reused freely without restriction.
Average Temperature August 2080 -2089.

Consider the changes in your own home region

Use one of the tools introduced on this page to zoom into your home state, region, or city, and see the past and predicted future changes in temperature. You can also change the map type to precipitation and explore the changes in precipitation in your hometown, across the United States, or globally.

Put climate change in perspective by considering the following:


How old will you be in 2050, 2080, 2090?
How much will the temperature in most of the United States have changed by 2080?
Give several examples of how the increase in average temperature or precipitation could impact your daily life.
How will changes in days above 90˚F impact your life?
How will frost free days impact the maple sap flow?

Now that you have seen the changes in temperature for this time period, recall the needs of the sugar maple by reading this page Silva Culture Information – Maple Sugar tree. Use the information in the publication to answer the Stop and Think questions below.


Migration of the trees

Next, view the graphic, below, from U.S. Climate Program office (globalchange.gov) showing the distribution of tree species in the recent past and in the projected future. Find the Maple-Beech-Birch forest in the graphic. 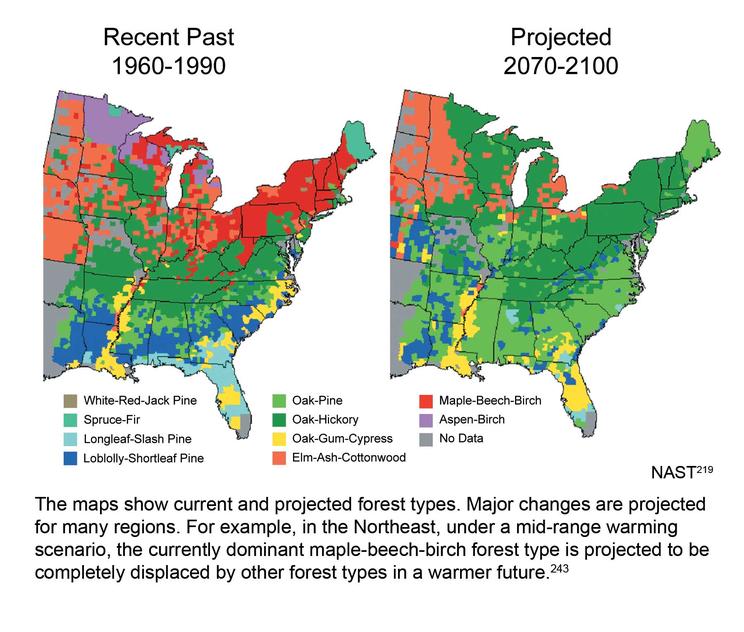 Provenance: globalchange.gov
Reuse: This item is offered under a Creative Commons Attribution-NonCommercial-ShareAlike license http://creativecommons.org/licenses/by-nc-sa/3.0/ You may reuse this item for non-commercial purposes as long as you provide attribution and offer any derivative works under a similar license.

After you have viewed the change for the entire eastern United States, examine the trees of the Northeast featured in the graphic below. The species are again color-coded. Note the present location and the potential future locations under each of the two emissions scenarios. What happens to the range of the sugar maple (and Maple-Beech-Birch forest) in each case? 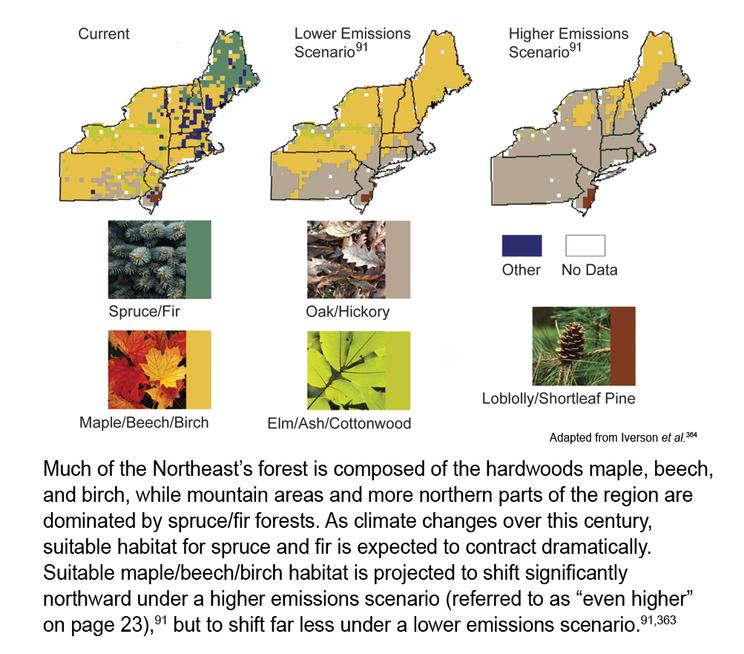 Provenance: globalchange.gov
Reuse: This item is offered under a Creative Commons Attribution-NonCommercial-ShareAlike license http://creativecommons.org/licenses/by-nc-sa/3.0/ You may reuse this item for non-commercial purposes as long as you provide attribution and offer any derivative works under a similar license.

Investigate the potential changes in tree (and bird) habitat using the U.S. Forest Service's Climate Change Atlas. On the Atlas homepage, read the introductory paragraph, describing the Atlas, and then access the interactive Atlas website either from the homepage or by clicking this link: U.S. Forest Service's Tree Atlas

Once there, choose a tree species of interest, either by common name or by scientific name. On the next page that opens, click the button Abundance Change Maps, under Modeled Future Habitat. Select the Average of 3 GCM's - High to compare with the current FIA (Forest Inventory Analysis). On the maps, the color key shows the abundance of the tree species while the blue line is the boundary of the potential range of the species. Explore several species of interest, including the sugar maple.

Show me how to use the Atlas page

Generalize to other plants

Go to the Interactive Hardiness Zone Map website and observe the graphic that shows the USDA plant hardiness zones in 1990 and 2012. Use the slider on the page, to flip between the two maps.

Hide
The following map from Arbor Day, shows changes between 1990 and 2015. You can see many areas have changed one or two zones in that time period. Map source: Arbor Day 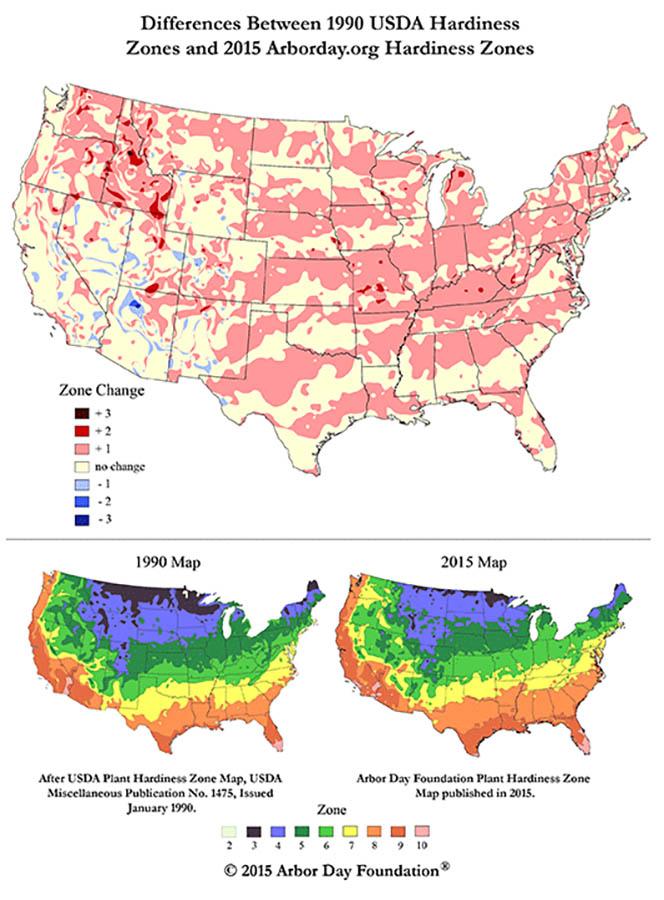 Provenance: arborday
Reuse: This item is offered under a Creative Commons Attribution-NonCommercial-ShareAlike license http://creativecommons.org/licenses/by-nc-sa/3.0/ You may reuse this item for non-commercial purposes as long as you provide attribution and offer any derivative works under a similar license.

5. Now that you have explored climate factors, explain how climate zones are used to make hardiness zone maps and why the USDA revised the hardiness zone map in 2012 or 2015. How do you think climate change will change the types of plants growing in your neighborhood?

6. What types of impacts could a change in the tree species have on other life in the forest, for example, insects or birds?

How do we know what we know?

What do trees and bees have in common? Pollen. NASA satellites have observed a change in the timing of spring "green-up" over the past few decades indicating a warmer climate. In order to confirm the change in plant life, scientists such as Wayne Esaias, are now studying changes in the timing of honey bee honey production.

Watch this short NASA video (5 minutes) and read more about scientists are studying climate change and its impact on plants, pollen, and honey bees.