Seeing the atmosphere through the clouds 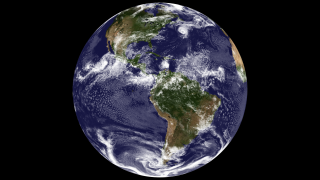 
Most days the atmosphere is transparent and difficult to see with the naked eye. Occasionally though, clouds, dust, fog, or smoke, allow us the see the movement of the air around us. Begin this lab by viewing the video animation entitled "GEOS 5 modeled clouds" linked below. While watching this short video clip, consider the following questions about clouds, and how they help us to better see and understand the atmosphere. (Note: you may need to watch the video several times to see all the details.) Video courtesy of NASA/Goddard Space Flight Center.

From what you discovered in the water cycle lab (Lab 2A), describe what you think is causing the clouds to form. Recall a cloudy and breezy afternoon; how do clouds allow us to "see" the movement of the atmosphere? Discuss memorable cloud patterns with your neighbor.

Scales of weather and climate

The atmosphere is one interconnected system. For convenience of study, scientists subdivide the atmospheric circulation and weather patterns into categories based on their size and duration. In general, the smaller, local-scale weather events have the shortest life expectancy, while the global-scale patterns can persist for weeks or months. In this study, you will begin by exploring the largest scale patterns, the planetary or global scales, and work to the smallest scale patterns—those that take place in your own neighborhood, schoolyard, or park. 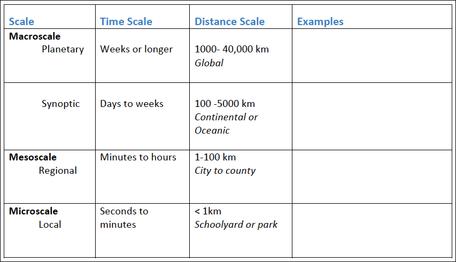 As you learned in Lab 2, much of the incoming solar radiation is not directly absorbed by the atmosphere itself but by Earth's surfaces, including both the land and the ocean. The atmosphere, therefore, is largely heated indirectly by long-wave radiation emitted from Earth's surface. The atmosphere acts like a gaseous fluid in which convection cells form. These cells transfer heat energy and moisture from one place to another. In this lab, you will examine global patterns of circulation in the ocean and atmosphere. The ocean and atmosphere combine forces to move both matter and energy around the globe.

Begin this section of the lab by exploring the features of the Moving Heat interactive, below. In this interactive, you will be examining animations, graphics, and short videos built from NASA satellite data. While investigating, you will be looking for ways that the ocean and atmosphere combine to move moisture and heat energy around the globe. Take a few minutes to explore the buttons and layers of this interactive learning tool. When you are done exploring, click the Air Flow button to return to the opening screen.

*This video replaces a Flash interactive

The directors of global weather and climate

In this section, you will be introduced to each of the major directors of global climate and weather. Take notes about each "director" in your notebook, or on the organizing chart provided at the beginning of the lab.

Unequal heating of Earth's surface by the sun drives the movement of the atmosphere, which we experience as wind. Around Earth there are three major convection cells known as: Hadley, Ferrel, and Polar circulation cells. On a global level, they help to equalize the incoming solar radiation received on Earth by transporting the excess thermal (heat) energy from the Equatorial regions to the Poles.

Turn on and view the circulation cells (click the show button under Circulation Cells), note how these cells work in concert to move air and heat away from the equator and towards the polar regions. The origin of the energy used to drive these air currents is incoming solar radiation. The process can be broken down into the following steps, beginning at the Equator.

Describe the motion of the circulation cells in the interactive; are they all rotating in the same direction?

Hide
No, the middle cell, known as a Ferrel cell, rotates in the opposite direction. This air current, which is less organized, is driven primarily by the motion of the other two.

Use the Moving Heat interactive to explore the relationship between winds and pressure. Record your observations in your notebook or on the chart and map provided in the link above.

As you have seen in several examples, winds and ocean currents move more than just heat, they also transport substantial quantities of moisture around the globe. Study the image to the left. (Click image for larger view, in a new window.)

3. Look for the relationship between the air circulation patterns and the dry and wet regions. Notice the symmetrical banding of wet and dry regions around the Earth. While viewing the image, answer the Checking In questions below.

While viewing the image to the right, answer the following questions. 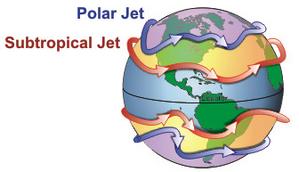 Jet Streams are areas of fast-moving rivers of air that circle Earth. They can reach speeds of more than 160 km per hour (100 mph). They are located at the boundaries of the Hadley, Ferrel, and Polar cells, described above. They influence the movement of larger air masses that reside over the continents and oceans. The Jet Streams are 6 to 15 kilometers above the surface of the Earth, in the boundary between the troposphere and stratosphere. They follow the meandering boundaries between the polar and mid-latitude air masses. The Polar Jet Stream, which flows over North America, is generally stronger in the United States during the winter months. It directs such notorious winter weather events as the "Alberta Clipper" and "Polar Vortex" across the Great Lakes and New England. As a general rule, when the Polar Jet Stream is located south of your location, the weather is relatively cold.

Click this link to view a map of today's Jet Streams on Globe location. On the globe, look for the region of the fastest air flow, colored red. Information about the data can be found by clicking the word "earth" below the graphic. View the globe to see how the Jet Streams meander over time. Record your observations of the general location of the Jet Streams on your printed world map.

Wind patterns and storms combine to move the majority of the heat around the Earth. According to scientists at the National Center for Atmospheric Research (NCAR), 78% of the poleward heat transport in the Northern Hemisphere, and 92% in the Southern Hemisphere, is due to atmospheric processes. To get a feel for this, consider, for example, how much solar energy was needed to drive the water cycle in Lab 2A. As the water changed state from liquid to gas, energy was absorbed, forming a "cloud" of water vapor. In the atmosphere, clouds are transporters of both moisture and heat energy. 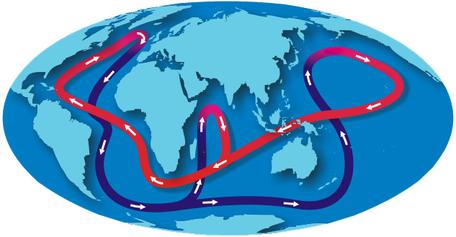 Provenance: NOAA http://oceanservice.noaa.gov/education/yos/resource/JetStream/ocean/circulation.htm
Reuse: This item is in the public domain and maybe reused freely without restriction.
Ocean currents transport the remainder of the heat. These currents include both surface, or wind-driven currents, and thermohaline (thermo=heat; haline=salt) or density currents. A simple schematic of these currents is pictured at left. It is estimated that the water in these currents may take a thousand or more years to circulate the globe! View the short narrated video, below, from the National Science Foundation (NSF) to learn more about this important global conveyor of heat. While viewing, observe how the heat is distributed around the world by ocean currents.
After watching the video below, answer the Checking In question.

According to the video:

Use the information given in the text, graphics, Moving Heat interactive, and videos in this section to answer the following questions. Use the notes that you took on your world climate map and weather and climate timescale chart. Whenever possible, give specific examples. For more in-depth information, view the Climate Reanalyzer site described in the optional extensions below.

Global precipitation and temperature patterns combine with other regional and local influences, such as geography, to determine an area's climate and, ultimately, vegetation patterns. In Lab 4: Climate Patterns and Life, you will more closely examine the influence of climate on the spatial distribution of plant and animal life.

The MeteoEarth App for iPad and Android tablets, is a fun way to explore the relationships between weather drivers, such as pressure systems and wind patterns.

Curious about recent or historical weather patterns? Check out this amazing website Climate Reanalyzer to see a variety of fascinating maps—scales from global to regional.