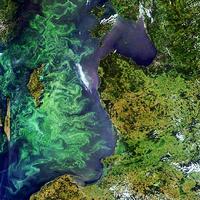 A colorful summer marine phytoplankton bloom fills much of the Baltic Sea in this satellite image captured by Envisat's MERIS on 13 July 2005. Although beautiful in appearance, blooms such as these can sometimes be devastating to marine ecosystems. Photo courtesy of European Space Agency.

Algal blooms, like the one in the photo to the right, occur naturally when nutrient-rich cold water from the seafloor rises to the surface, stimulating rapid reproduction of microscopic algae (phytoplankton). Phytoplankton is essential to the health and productivity of the oceans, as it forms the base of the marine food web, providing sustenance for higher level consumers—namely fish.

Most phytoplankton are too small to be individually seen without a microscope. However, when there is a high enough concentration of phytoplankton, they may appear as a green discoloration of the water due to the presence of chlorophyll within their cells. This is called an algal bloom. Phytoplankton obtain energy through photosynthesis and therefore live in the well-lit surface layers of oceans, seas, and lakes. In addition to light, algae are also dependent on the availability of nutrients such as nitrate, phosphate or silicic acid for growth.

A limited amount of nutrients is available naturally, which generally keeps the growth of algal blooms from getting too large. However, effects of human civilization are trickling their way into the oceans. Runoff from fertilizers applied to agricultural fields, golf courses, and suburban lawns; deposition of nitrogen from the atmosphere; erosion of soil containing nutrients; and discharge from aquaculture facilities and sewage treatment plants, are increasing the nutrient content in coastal waters and consequently increasing the size and longevity of algal blooms. This process of nutrient loading is known as eutrophication. Algal blooms can disrupt normal functioning of marine ecosystems, causing a variety of problems such as depletion of the oxygen in the water that fish and shellfish need to survive. Certain species of marine algae produce harmful blooms, known as red or brown tides, which can be toxic to both marine animals and humans.

In Part A of this investigation, you will grow your own algal bloom and test the effects various nutrients and other water qualities have on the occurrence and intensity of algal blooms. In Part B, you will look at two years of satellite data showing chlorophyll concentration in the Sea of Cortés and read an article describing the one-to-one correlation between agricultural runoff and algal blooms in this region. In Part C, you will learn about two potentially deadly consequences of eutrophication—dead zones and harmful algal blooms (HABs).