And On His Farm He Had Some Fish 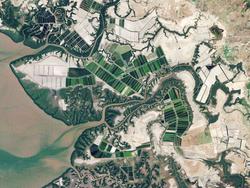 Satellite image of shrimp farms along the coast of Honduras. Photo courtesy of NASA Earth Observatory.

The number of coastal aquaculture facilities has increased dramatically over the last 35 years. These facilities are producing millions of tons of seafood, helping to alleviate the effects of dwindling fish populations in the oceans. However, the construction and maintenance of these facilities is not without drawbacks. Natural habitats are being altered or destroyed and pristine coastlines are becoming overdeveloped and polluted.

1. Watch this brief video about mangroves to understand the importance of the forests.

Inside the Mangrove Forest. If video does not play, visit Khaled bin Sultan Living Oceans Foundation.

Answer the following questions to check your understanding of the information contained in the video about mangroves.

3. Read through the story to learn about the events responsible for the differences in the three images.

Answer the following questions to check your understanding of the information contained in the article about the impacts of shrimp farming in Honduras.

4. Open Google Earth and using the Search box, navigate to 13.0N, 87.2W, the location of the Honduras shrimp farms just north of the border of Nicaragua. This is the area you've just looked at in the NASA images.

5. Zoom out so you can see most of the farms and coast, similar to the images you saw before. An altitude of about 20 miles or 27 km should be enough.

6. You're now going to explore the historical changes over time on your own. Click View in the menu bar. Then click Historical Imagery. 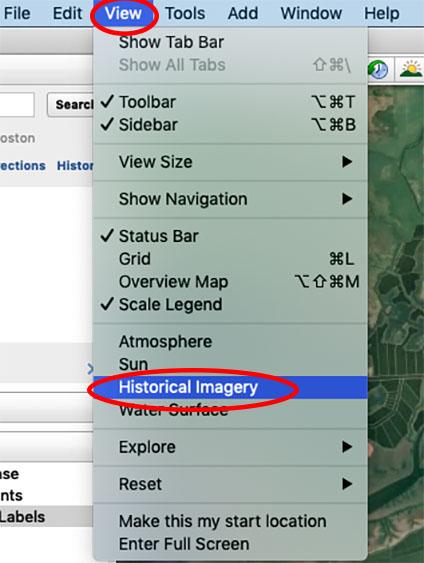 A toolbar in the upper left of the map screen should appear. Use the slider to scroll through images of this site from the most recent satellite image available to the oldest satellite image in December 1984.

7. Use the polygon tool to measure the area the shrimp ponds occupy in 2016.

Check your understanding of the information contained in the comparison images of Honduras's Pacific coast.

Farmed whiteleg shrimp is a primary aquaculture production in Honduras; and in 2013, the country produced approximately 27,000 metric tons. The farmed shrimp industry is also large the Southeast Asian countries of Indonesia, Vietnam, and Thailand where whiteleg and blackstripe shrimp are grown and mangrove loss has similarly been a problem.

Answer the following questions to check your understanding of the information contained in the video clip about Vietnamese shrimp farmers.

9. Watch this short video about shrimp farming in Iowa.

3: What are some similarities in the farming of shrimp for the Vietnamese farmer and the Iowan farmer? Consider methods they employ to maintain their aquaculture's low impact on the local environment.

The Shrimp Industry Is Dirty. Can New Farming Technology Clean It Up?

Mangroves and shrimp farms in Ecuador

RDM Aquaculture in Fowler, IN