Part B: Algal Blooms in the Gulf of California 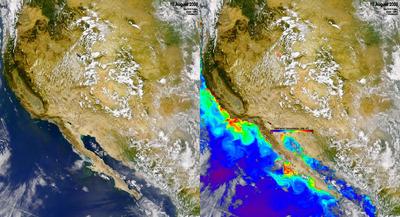 Real-color and chlorophyll concentration images of an algal bloom in the Gulf of California on August 10, 2003. Images courtesy of NASA.

In Part A, you saw how adding nutrients to algal cultures increased their reproduction rates. Fertilizer, much like what you added to your lab cultures, finds its way into lakes and oceans through runoff from agricultural farms, golf courses, and suburban lawns. Other nutrients get added from the atmosphere, soil erosion, upwelling, aquaculture facilities, and sewage plants. In this part of the investigation, you will use data from NASA's Aqua MODIS satellite. You will view image data in the NOAA View Global Data Explorer and then visit NOAA's Coastwatch to create graphs of the data you observed. You will use the data formats to look for correlations between phytoplankton blooms in the Gulf of California and the addition of nutrients through agricultural runoff from the surrounding land. 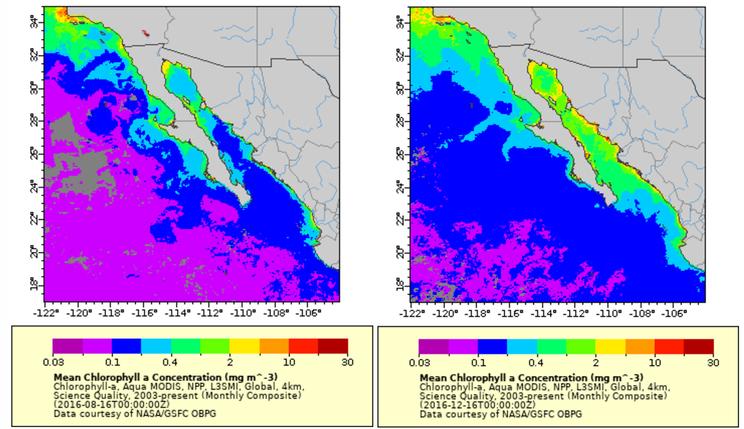 2. Go to the NOAA View Global Data Explorer website. The link will take you to the Chlorophyll Concentration data map.

3. Zoom in to the Gulf of California so that you can see the same area of ocean you see in the images above.

4. On the left panel, click Monthly to see the data as monthly data averages, and use the date slider to back the map data up at least a year from the current date. Then click the box labeled Data Values – this will allow you to use your mouse to view the temperature where your mouse hovers on the data map. 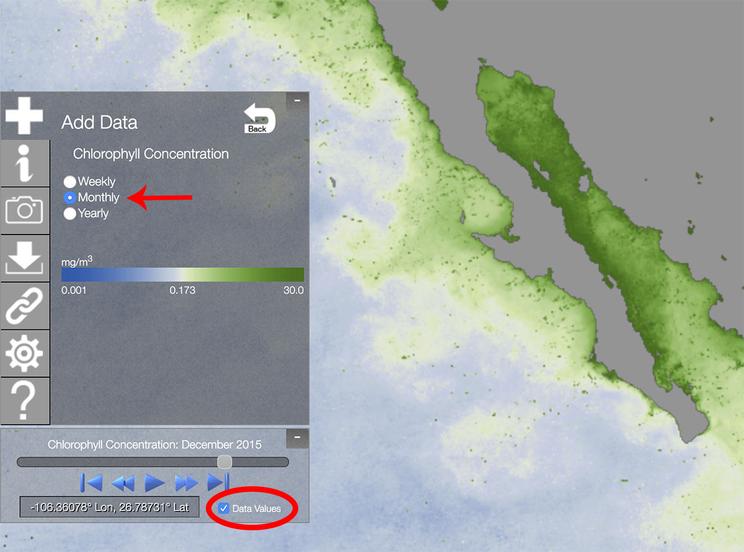 1: Describe the variation in the chlorophyll levels in the Gulf of California during the two-year period covered by the animation. Are there certain times of year during which chlorophyll levels are particularly high or low? Explain why you think these differences exist.

2: In general, in what area(s) of the Gulf are chlorophyll levels highest? Explain why you think this occurs.

6. You're now going to generate a scatterplot of the data you've just seen depicted on the map. Visit the NOAA ERDDAP site. 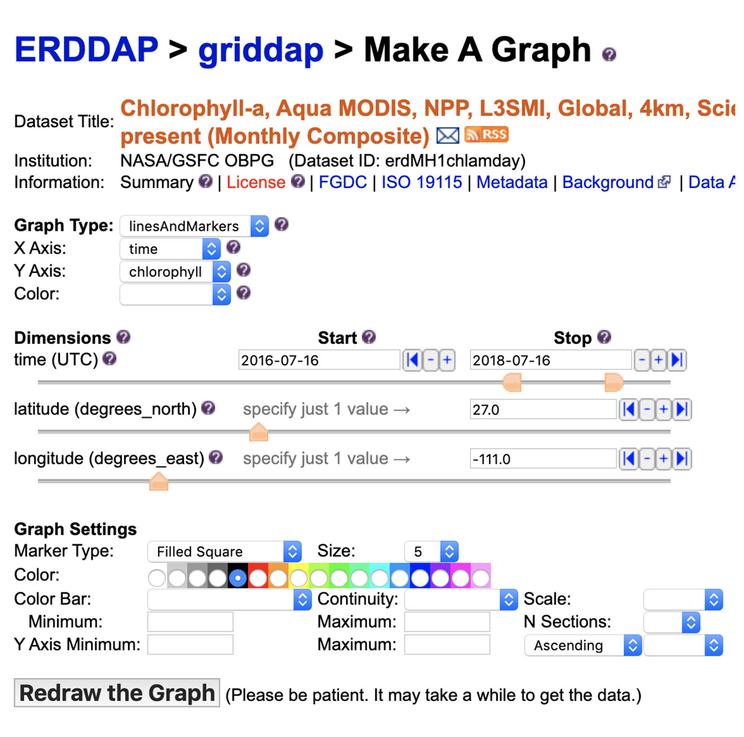 Provenance: NOAA ERDDAP
Reuse: This item is offered under a Creative Commons Attribution-NonCommercial-ShareAlike license http://creativecommons.org/licenses/by-nc-sa/3.0/ You may reuse this item for non-commercial purposes as long as you provide attribution and offer any derivative works under a similar license.

10. Click on the Redraw the Graph button. The scatter plot with data points connected by smoothed lines will appear after a few moments. The plot shows chlorophyll a concentration vs. time.

The location of 27N, 111W is not far from the outlet of the river that runs through the Mexico's agriculturally rich Yaqui Valley. Your teacher may have you choose other lat/long area points within the Sea of Cortés to graph. Consider the reasons for differences and similarities of the graphs over the same time period.

Describe how the average chlorophyll concentration in the Gulf of California varies over the given time period.

11. Read the article Researchers discover direct link between agricultural runoff and massive algal blooms in the sea for an explanation of what you have just observed in the satellite data.

3: According to a study published in Nature, irrigation typically took place in Mexico's Yaqui Valley four times a year from 1998-2002: November, January, March, and April. Do the data from 2016-2018 indicate the same trend in irrigation events? Support your answer with evidence from your graph.

Although there is currently no evidence that the blooms seen in the Gulf of California are toxic or creating oxygen-depleted "dead zones," the threat is real. Continue to Part C to learn more about these potentially deadly consequences of excessive algae growth.