Hide
These images show how ocean color changes from winter to summer in the Gulf of Mexico. Summertime satellite observations of ocean color from MODIS/Aqua show waters which may include large blooms of phytoplankton extending from the mouth of the Mississippi River all the way to the Texas coast. When these blooms die and sink to the bottom, bacterial decomposition strips oxygen from the surrounding water, creating an environment very difficult for marine life to survive in. Reds and oranges represent high concentrations of phytoplankton and river sediment. Image courtesy of [link http://svs.gsfc.nasa.gov/vis/a000000/a002900/a002979/ 'NASA' new].
Algal blooms can have devastating effects on surrounding marine environments. Intense algal blooms can cause hypoxia, or oxygen depletion. Some species of algae produce toxins, which can kill marine life, contaminate water, and make humans sick.

1. Watch this film to learn about fishing in the Gulf of Mexico and the 2019 dead zone.

Gulf of Mexico Dead Zone. If video does not play, visit VOA News.

2. Study the image below to learn about the 6 stages of dead zones. 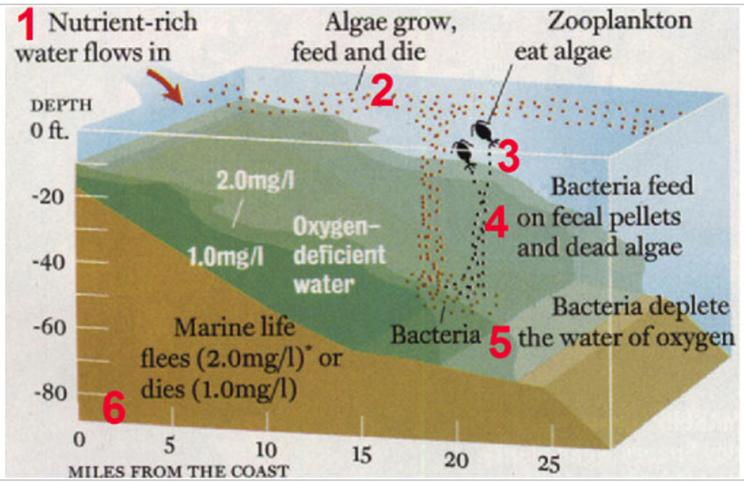 Answer the following to check your understanding of dead zone formation.

How is the oxygen removed from the water?

Hide
As algae die, the mass of cells and other debris sink to the seafloor. Bacteria break down this organic matter, consuming most of the oxygen in the water.

3. Visit this site to read more about Dead Zones in the Ocean.

Answer the following questions to check your understanding of the information provided in the article.

How many dead zones have been found in the world's oceans?

Hide
Worldwide, there are some 400 dead zones-areas of water that are too low in dissolved oxygen to sustain life.

How are dead zones classified?

Hide
Dead zones can be categorized based on their duration. They can be Permanent, which are limited to very deep water. If they last for only hours or days, they are considered Temporary dead zones. Seasonal dead zones occur yearly during warmer months. Diel cycling hypoxia are dead zones that occur during warm months but the water is only hypoxic at night. 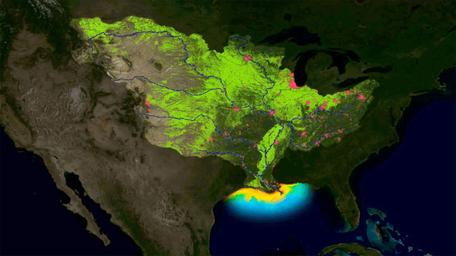 ×
from NOAA Visualization Studio Click to view larger
Since 1960, the number of global dead zones have nearly doubled every decade. Consider the image at the left. The image shows the drainage basins for the Mississippi River, which empties into the Gulf. Consider how much of that area contains cities and urban areas (highlighted in red) and farmland (in green), both sources of nutrient runoff that feeds the algal blooms.

4: From what you know about the Gulf of Mexico dead zone, would you consider it naturally or human caused? How would you classify it according to its duration using the categories from the article you read? Give evidence to support your answer.

4. Watch this video to learn about one Iowa farmer who is using a variety of methods to keep nutrients from his farm from entering the Mississippi watershed.

Healthy Farms, Cleaner Water. If video does not play, visit This American Land.

The passage of Hurricane Barry over the Gulf in early July 2019 helped mix the water column over the Louisiana shelf, temporarily disrupting the hypoxic zone, preventing it from becoming the massive dead zone predicted earlier in the season. The dead zone in the Gulf of Mexico has been studied since 1985. The 2019 hypoxic zone measured in as the 8th largest in the Gulf at 18,005 km2.

Answer the following questions to check your understanding of the information provided in the article.

What steps can be taken to help restore healthy ecosystem function where dead zones occur? 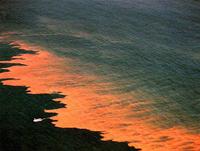 In addition to their ability to suffocate the oceans, some species of algae produce dangerous toxins that can be deadly to both sea and land life, including humans. The term "red tide" is often used to describe these phenomena; however, scientists now prefer the term harmful algal bloom (HAB), since:

Florida's Red Tide from the SciShow

2. Visit the NOAA website to learn more about harmful algae blooms (HABs). Be sure to read through the five parts (What, Why, Forecasting, When, Where).

What are some factors that contribute to HABs?

What are some methods used to track HABs?

HABs cause economic distress to the recreation, tourism, and seafood industries. During HABs, beaches are often shut down to protect the public health. Recreational fishing boats need to travel farther in order to avoid algal waters. Moratoriums are placed on shellfish harvesting. Shellfish, being filter feeders, ingest the algae responsible for HABs, but in doing so, become toxic themselves. Cooking cannot destroy the toxins.

3. Read here about five types of syndromes caused by the different types of toxic algae.

5: In your own words, summarize the importance of reducing the number of human-induced algal blooms in the world's oceans.

The Ocean Is Losing Its Breath.

Nutrient management in no-till and minimum till systems

View Dead Zones in Google Earth - Open the Oceans layer and click to view Dead Zones. They will appear as fish skeletons.

What is a Wetland?