Earth's surface hosts many forms of snow and ice, including sea ice, lake and river ice, snow cover, glaciers, ice caps and sheets, and frozen ground. Together, these features are known as the cryospherecryosphere: the set of all locations on or beneath Earth's surface where frozen water exists.. Snow and ice are a vital part of the global climate system because they influence air temperature, sea level, ocean currents, and storm patterns all over the world. Life on Earth depends on the cryosphere for many different things. In Arctic regions, sea ice provides a home for animals like seals and polar bears, feeding and breeding areas for a variety of migrating species, and hunting grounds for local communities. Much of the world depends on the cryosphere for fresh drinking water, while others use it for recreation—without the cryosphere, there would be no skiing, sledding, or snowball fights! 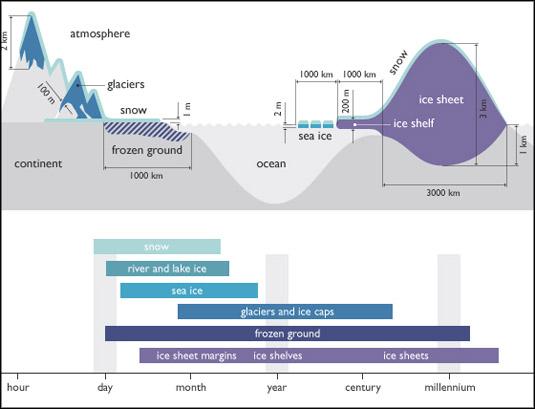 Provenance: Image Source: IPCC Fourth Assessment Report: Climate Change 2007, Figure 4.1
Reuse: This item is offered under a Creative Commons Attribution-NonCommercial-ShareAlike license http://creativecommons.org/licenses/by-nc-sa/3.0/ You may reuse this item for non-commercial purposes as long as you provide attribution and offer any derivative works under a similar license.

After completing this Lab, you should be able to:

Throughout these labs, you will find three kinds of questions. Your teacher will let you know which answers you should record and turn in.