Tour of the Cryosphere

Provenance: Image credit: NASA and the National Snow and Ice Data Center, University of Colorado, Boulder
Reuse: This item is offered under a Creative Commons Attribution-NonCommercial-ShareAlike license http://creativecommons.org/licenses/by-nc-sa/3.0/ You may reuse this item for non-commercial purposes as long as you provide attribution and offer any derivative works under a similar license.
Earth is constantly changing all around us. Some changes, like a shift in the direction of a breeze, may be subtle. Other changes, like the landfall of a hurricane, are far more dramatic. Sometimes, subtle changes that occur over an extended period of time can suddenly become dramatic events, like when years of increasing temperatures and ice-melt result in the collapse of an entire ice shelf. Changes in Earth's systems, including changes in the cryosphere, could potentially have profound consequences for life as we know it. (Read Earth System: The Basics (Acrobat (PDF) 134kB Jun23 22) for more information about Earth's systems.)

The cryosphere, particularly in the polar regions, is extremely sensitive to changes in global climate. Therefore, understanding how and why the cryosphere changes over time in response to both natural and human influences is vital for predicting future conditions on our home planet. Scientists use snow and ice as climate "indicators" by monitoring trends in the cryosphere over time. Examples of such indicators include how many square kilometers of the ocean are covered by Arctic sea ice (sea ice extent), the balance between snow accumulation and melting in glaciers (glacial mass balance), and the amount of land covered by snow.

The cryosphere is also very sensitive to feedbackfeedback: exchange between the input and output of a system. loops. A feedback loop is a pattern of interacting processes where a change in one part of the system, through interaction with other parts of the system, either reinforces the original process (positive feedback) or suppresses/weakens the process (negative feedback). In order to model and predict climate variability correctly, feedback loops must be understood. As you make your way through this unit, you'll learn more about many of the different cause and effect scenarios, including feedback loops, that are playing out in the Earth's cryosphere.

As you watch the video:

NOTE: The video includes audio narration, so make sure you have the volume on your computer switched on.

A Tour of the Cryosphere 2009 is a high definition animation showing fluctuations in the cryosphere through observations collected from a variety of satellite-based sensors. As you watch, you will fly around the globe, visiting glaciers, ice sheets, snow trails, and other parts of the cryosphere. Image/animation courtesy of NASA.

With a partner, in a small group, or as a whole class, discuss the following question:

Changes in snow and ice conditions in the Arctic can affect people all over the world. Recent studies have shown that there is a link between the amount of sea ice in the Arctic, particularly during summer months, and altered winter weather patterns at much lower latitudes (Vihma, 2014). The southwestern United States, a region that frequently deals with water shortages, has experienced increased drought during winters following summers of relatively low sea ice extent in the Arctic. Scandinavia, which relies on hydropowerhydropower: power derived from the force or energy of moving water. for the majority of their electricity production, has also experienced decreased precipitation in the wake of diminished Arctic sea ice.

Life and the Cryosphere 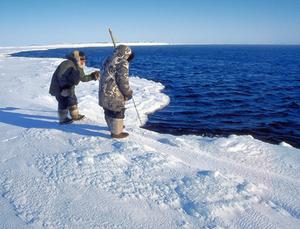 Provenance: Image courtesy of Environment Canada (http://www.ec.gc.ca/) via Environment News Service (http://www.ens-newswire.com/ens/apr2007/2007-04-19-03.asp)
Reuse: This item is offered under a Creative Commons Attribution-NonCommercial-ShareAlike license http://creativecommons.org/licenses/by-nc-sa/3.0/ You may reuse this item for non-commercial purposes as long as you provide attribution and offer any derivative works under a similar license.

Depending on where it is you call home, it may not be immediately obvious what role the cryosphere plays in your life, but the condition of the cryosphere impacts the whole world—even in warm and temperate regions where snow and ice are either rare or nonexistent. Snow and ice help regulate global climate, drive ocean currents, and provide fresh drinking water for much of the world.

For centuries, people in the Arctic have relied on the predictability of snow and ice for their survival. However, recent changes in climate have caused snow, ice, and weather patterns in high latitude native communities to become uggianaqtuq (pronounced OOG-gi-a-nak-took)—a North Baffin Inuktitut word that means to behave unexpectedly, or in an unfamiliar way. Changes to the cryosphere in and around these communities impact a myriad of things including hunting, coastal erosion, ocean productivity, transportation, and animal habitats.

Watch this video to learn about how unexpected changes in the cryosphere are affecting Arctic people's way of life.

Eyewitness to Change in the Arctic from Smithsonian's NMNH

1: In your own words, summarize the cryosphere. What is it? What is it made of? Where can you find it?

2: Why is it important to monitor changes in the cryosphere? Explain.

Even if you don't live in the Arctic, significant changes to the cryosphere could have a major impact on your life. As a class, discuss the following questions: