Part B: Why We Study the Cryosphere 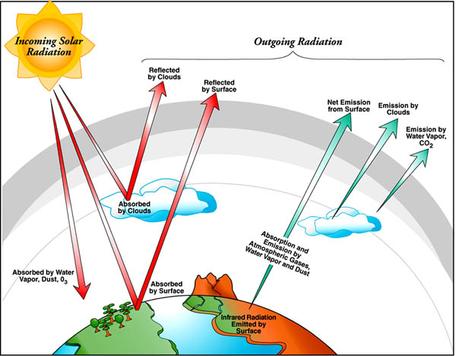 Provenance: Steve Ackerman and Tom Whittaker http://www.archive.arm.gov/Carbon/dataneeds/radiation_pres.jpg This image also is used in http://www.ux1.eiu.edu/~cxtdm/met/sirs.html and http://www.teachingboxes.org/avc/content/Measuring_Solar_Radiation.htm
Reuse: This item is offered under a Creative Commons Attribution-NonCommercial-ShareAlike license http://creativecommons.org/licenses/by-nc-sa/3.0/ You may reuse this item for non-commercial purposes as long as you provide attribution and offer any derivative works under a similar license.
Snow and ice are an important part of the global climate system. Acting like a highly reflective shield, the cryosphere protects Earth from getting too warm. Snow and ice reflect more sunlight than open water or bare ground. The presence or absence of snow and ice, therefore, affects heating and cooling over Earth's surface, influencing the entire planet's energy balance. Changes in snow and ice cover affect air temperatures, sea levels, ocean currents, and storm patterns all over the world.

Earth's radiation budgetradiation budget: the relationship between how much energy the Earth gets from the Sun and how much energy the Earth-system radiates back into space. helps us understand the net energy flow between the sun and the Earth system. The sun's energy provides the fuel and warmth needed to support and sustain life on Earth. Sunlight also provides the energy that powers Earth's climate system. If you've ever worn a dark-colored t-shirt outside on a sunny day or tried to walk across a black tar driveway on a summer afternoon, you probably already know that darker colors absorb more light and heat up more easily than lighter colors that largely reflect incoming light. Similarly, the colors of Earth play a large part in how much light from the sun is absorbed and how much is reflected. White clouds, snow, and ice are highly reflective and help regulate the planet's temperature by bouncing sunlight back into space.

If Earth was completely covered in ice like a giant snowball, its albedo would be about 0.84, meaning it would reflect 84 percent of incoming sunlight and absorb just 16 percent. On the other hand, if Earth was completely covered by a dark green forest canopy, its albedo would be about 0.14, meaning 86% of incoming sunlight would get absorbed and our world would be significantly warmer than it is today. Satellite measurements made since the late 1970s estimate Earth's average albedo to be about 0.30. In other words, about 30 percent of incoming solar radiation is reflected back into space, and 70 percent is absorbed. Earth's radiation budget is balanced when the amount of incoming radiation is equal to the amount of outgoing radiation. If the budget is out of balance, Earth may experience net warming or cooling. Therefore, it's extremely important for scientists to monitor the cryosphere and keep track of how much snow and ice there is at any given time on Earth.

In this part of the lab, you will model different surface conditions to explore how snow and ice help regulate Earth's temperature and climate.

Show me materials needed for this experiment 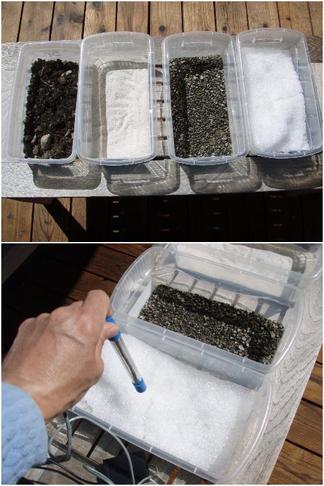 1: What albedo did you find for the:

2: How much more reflective is the snow/ice than the soil (i.e., what is the ratio of the ice's albedo to the soil's albedo)? 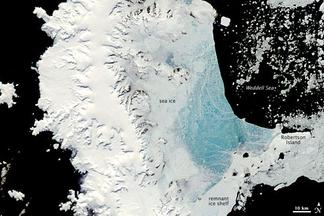 Provenance: Image courtesy of NASA (http://www.nasa.gov/images/content/306247main_larsen2008_540.jpg)
Reuse: This item is in the public domain and maybe reused freely without restriction.

3: How did the temperatures of the two regions compare over time?

With a partner, in a small group, or as a whole class, discuss the following: 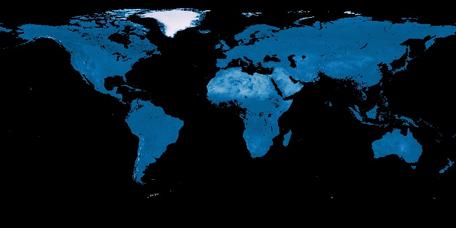 Provenance: Image source: NASA (http://neo.sci.gsfc.nasa.gov/view.php?datasetId=MCD43C3_M_BSA)
Reuse: This item is in the public domain and maybe reused freely without restriction.
Want to learn more about albedo and its impact on land surface temperature? Visit the NASA Earth Observations (NEO) website to explore data and learn more about the instruments and techniques used to study: