Future of the Cryosphere

The cryosphere contains a lot of frozen water. As you saw in Lab 4C, climate, the cryosphere, and the oceans are tightly connected. Relatively small changes in Earth's average temperature can dramatically increase or decrease the amount of Earth's snow, ice and liquid water. With current data trends and computer models predicting a warming climate, sea level rise has become a major concern for coastal areas. A change in average global temperature of just one degree Celsius (two degrees Fahrenheit), could result in a one meter (three foot) rise in average global sea level.

1: Make a prediction. Which type of ice (sea ice or land ice) do you think poses a larger threat to sea level rise if large-scale melting due to climate change were to occur? Explain.

2: Did your model support your prediction? Explain.

3: How could you make your model more accurate?

Projections through the year 2100 are based on a statistical relationship between past rates of globally averaged temperature change and sea level rise, combined with different emissions scenarios. In general, higher emissions scenarios that lead to more warming would be expected to lead to higher amounts of sea level rise. The orange line shows the currently projected range of sea level rise most likely to occur by 2100, which falls within the larger risk-based scenario range. The large projected range reflects uncertainty about how glaciers and ice sheets will react to the warming ocean, the warming atmosphere, and changing winds and currents. Learn more here. 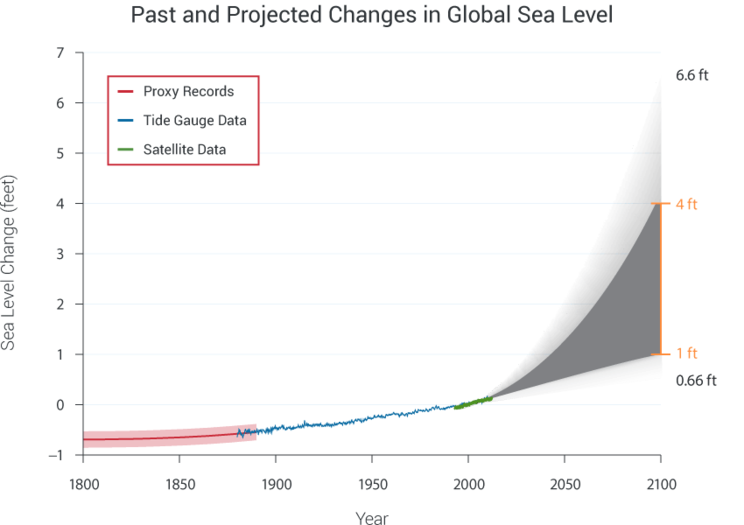 Hide
Estimated, observed, and possible future amounts of global sea level rise from 1800 to 2100, relative to the year 2000. Estimates from proxy data (for example, based on sediment records) are shown in red (1800-1890, pink band shows uncertainty), tide gauge data are shown in blue for 1880-2009, and satellite observations are shown in green from 1993 to 2012. The future scenarios range from 0.66 feet to 6.6 feet in 2100. These scenarios are not based on climate model simulations, but rather reflect the range of possible scenarios based on other scientific studies. The orange line at right shows the currently projected range of sea level rise of 1 to 4 feet by 2100, which falls within the larger risk-based scenario range. The large projected range reflects uncertainty about how glaciers and ice sheets will react to the warming ocean, the warming atmosphere, and changing winds and currents. As seen in the observations, there are year-to-year variations in the trend.

5: How might scientists improve their estimates to get a tighter range of predicted values farther into the future? Explain.

Global sea level and the Earth's climate are closely linked. The Earth's climate has warmed about 1°C (1.8°F) during the last 100 years. As the climate has warmed following the end of a recent cold period known as the "Little Ice Age" in the 19th century, sea level has been rising about 1 to 2 millimeters per year due to the reduction in volume of ice caps, ice fields, and mountain glaciers in addition to the thermal expansion of ocean water. If present trends continue, including an increase in global temperatures caused by increased greenhouse-gas emissions, many of the world's mountain glaciers will disappear. For example, at the current rate of melting, most glaciers will be gone from Glacier National Park, Montana, by the middle of the next century. In Iceland, about 11 percent of the island is covered by glaciers (mostly ice caps). If warming continues, Iceland's glaciers will decrease by 40 percent by 2100 and virtually disappear by 2200. Most of the current global land ice mass is located in the Antarctic and Greenland ice sheets (table 1). Complete melting of these ice sheets could lead to a sea-level rise of about 80 meters, whereas melting of all other glaciers could lead to a sea-level rise of only one-half meter.—U.S. Geological Society


The cryosphere has the potential to contribute an enormous amount of water to the oceans, which could cause sea level rise all over the world—even here in the United States.


3. Open the Surging Seas interactive. The map pages in this interactive show threats from sea level rise and storm surge to all 3,000+ coastal towns, cities, counties and states in the continental U.S.

4. Choose a location to explore that is personally important or interesting to you. Click on a state or label to get started, or type a zip code or location name in the search box at the top of the page.

6. As you move the slider, note changes in the map and in the information shown about how population, homes, and land are affected.

7. Click on the Facts link to open a PDF of facts and findings about the location you are exploring.

8. Prepare a short summary report about your chosen location using the information in the interactive map and facts and findings document.

As a class, share and discuss your Surging Seas reports. Then discuss what you've learned throughout the Climate and the Cryosphere unit.