Step 1 –
Expand your View from Two to Three Dimensions

The profile you created in Part 2 showed how deep the ocean is along a single east-west line. You can't tell anything about the ocean depth north or south of that line though.

In order to get a sense of the seafloor's three-dimensional (3-D) shape, you would need to take several more virtual cruises across the Atlantic, collecting depth data along other latitude lines. In this way, you could create a whole grid of depth measurements to help you understand the shape of the seafloor.

Show me an example of a data collection chart 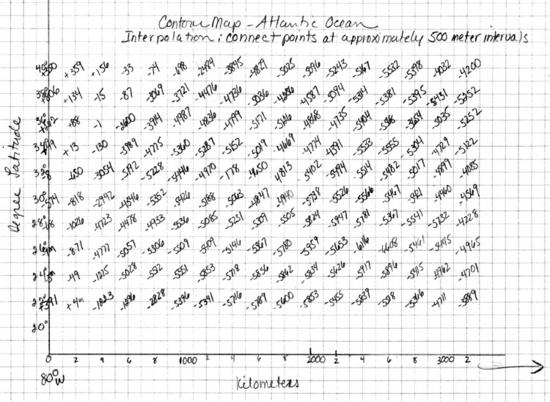 Take a look now and compare visualizations of the seafloor. 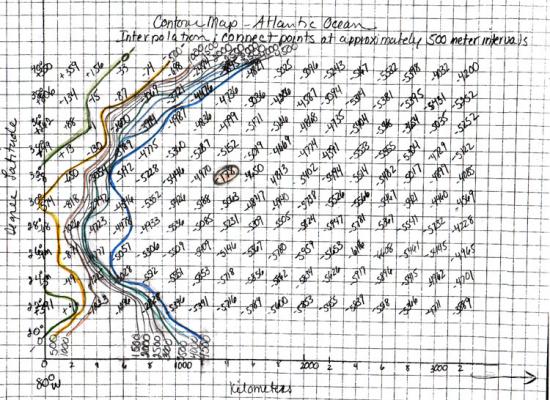 The map is not complete: contours have only been drawn for 500 through 4500 meters depth. Examine the grid carefully; trace your finger along the location where you would draw the 5000 meter contour.

The graphical visualizations constructed by hand show what it takes to make visual sense of ocean depth data. You had to collect, record, and graph the data to see them as a visual representation of the seafloor.

Now that you are familiar with how to construct profile and contour maps from data, you can use GeoMapApp to generate these displays for you. You can quickly and easily produce visualizations of the seafloor anywhere in the world. Using the computational power of visualization software will allow you to focus on what the graphs and visualizations tell you about the geologic and marine processes that have shaped our world.