The vastness of the ocean and the secrets of the submerged landscape contribute to its mystery. Seawater is opaque to light beyond a few hundred meters' penetration. Hence, there are no mountaintops one can scale to directly gaze at vast expanses of the abyssal seafloor.

- William B. F. Ryan, on the problems of mapping the seafloor

The earliest form of navigation on the sea was to keep within constant view of the land. Coastlines where ships sailed regularly were shown in clear detail on maps. Map makers simply guessed at the shapes of other coastlines. Source: National Oceanic and Atmospheric Administration, U.S. Department of Commerce 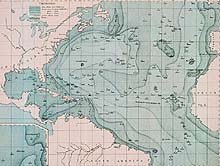 First attempt at a bathymetric map showing depths of the Atlantic Ocean. Published by Matthew Fontaine Maury in 1855. Source: NOAA 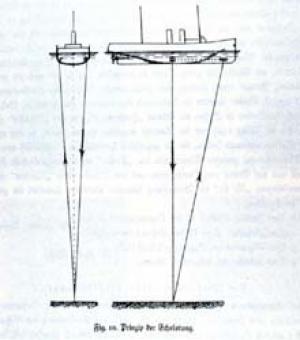 One of the earliest diagrams of echo-sounding in a published work. Source: F. Spiess' Die Meteor-Fahrt Forschungen, The Meteor Expedition (1928) by F. Speiss.

Show me an explanation of the instruments in the diagram

Hide
Differential Global Positioning Systems (DGPS) guide the research vessel and equipment positions. A single-beam echo sounder measures water depth and provides a continuous profile of the sea floor below the vessel. A 3.5-kHz profiler sends and receives sound pulses that penetrate about 5-10 meters into the sea floor. An interferometric bathymetric swath sonar system measures water depth and the intensity of sound reflected from the sea floor; the hull-mounted transducer sends out a fan of sound, which is reflected from the sea floor and received at the transducer. In high-resolution seismic-reflection profiling, a towed sound source transmits acoustic pulses that are reflected off the seafloor and the layers beneath. Towed hydrophones (shown at left) or hydrophones built into the sound source receive the returned signal. Sidescan-sonar systems map the intensity of sound reflected from the sea floor on either side of a towed vehicle that emits a fan of sound. The reflections provide an image of the sea floor and information on sediment types. Note that all of the instruments cannot be used at the same time. From U.S. Geological Survey Fact Sheet 039-02

At the top of this page, you read a quote by William B.F. Ryan in which he focused on the problems of trying to measure and visualize the ocean floor. His quote actually ends by describing a solution to the problem that has been solved using today's technology:

... We visualize the hidden seascape with digital data sets, picture element by picture element, as tiles of a growing quilt, each stitched in the course of month-long expeditions.

-William B. F. Ryan (1992) "An Introduction - Down to the Sea in a Ship" Oceanus, Woods Hole Oceanographic Institution, MA