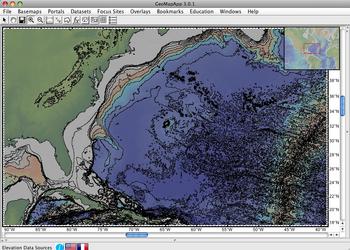 Example Output
Map of the Eastern United States and Western Atlantic Ocean displayed by GeoMapApp. Click on image for a larger view.

This map created by GeoMapApp displays contour information for the Atlantic Ocean. Contours are shown in 500-meter intervals along with color-coded topographic information. Latitude and longitude markings are also shown and depth data is dynamically viewable by moving your cursor.

This chapter is most appropriate for students in grades 9 - 16.

High school students are usually familiar with topographic maps that show elevations ranging from zero (sea level) upward. They have also been introduced to the basic concepts of plate tectonics. However, they have generally had little experience exploring the topography of the seafloor.

The bathymetric images in GeoMapApp are not satellite images or photographs, as many users may initially assume. Rather, they represent sonar data (depth measurements) that are compiled by computer software into a continuous grid. The sonar data are collected by oceanographic research ships. Displaying the grid of measurements according to a color code helps us interpret the imagery as the topography we would see if the water were removed from the ocean basins. You can find out more about the data collected by and used for marine research at the Marine Geoscience Data System site.

Instructors may want to preface this activity by demonstrating how we can map something which we cannot see. Prepare a box with a familiar object attached to the inside bottom and a wide grid of small holes in the top. Probe the holes with a "sonar stick" (chopstick or other thin wooden stick that has been calibrated with color) to determine the depths to the bottom of the box across the grid. Construct a map using color to indicate the shape of the object. Replace the box top with one that has a finer grid of holes and repeat. This will show that taking more measurements will result in a more detailed map.

The following questions can be used to elicit students' current understandings before the activity.

The chapter culminates with a collaborative project on contour mapping. The quality of the final project depends on:

The World in Spatial Terms
1. How to use maps and other geographic representations, tools, and technologies to acquire, process, and report information from a spatial perspective.
2. How to use mental maps to organize information about people, places, and environments in a spatial context.
3. How to analyze the spatial organization of people, places, and environments on Earth's surface.
Physical Systems
7. The physical processes that shape the patterns of Earth's surface

Ridge 2000 Program: Exploring the links between Planetary Renewal and Life in the Deep Ocean—R2K

MARGINS: A project to understand the complex interplay of processes that govern the evolution of continental margins.

The Physics of Sound—NOAA - Ocean Explorer