(or better known as "clickers") 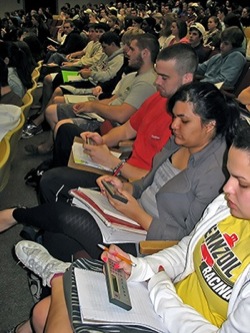 Similar to TV remote controls, clickers are used in class to answer questions.

Are you looking for a way to increase student engagement and learning in your classes? A Classroom Response System (CRS) is technology that promotes and implements active and cooperative learning. Beatty (2004) states that "By engaging their minds in class, (CRS) based instruction makes students active participants in the learning process." It allows students to anonymously commit to an instructor-posed question in class and provides immediate feedback. It is a software and hardware system in which students submit answers to questions via a transmitter, or "clicker." The transmitter sends the answer through a radio frequency which is captured by a computer through a USB receiver. A variety of question types can be asked and most systems can be integrated with PowerPoint.


Why Teach with a Classroom Response System?

A review of literature from a variety of disciplines (Caldwell, 2007; Fies & Marshall, 2006; Judson & Sawada, 2002; Simpson & Oliver, 2007; Stowell & Nelson, 2007) reveals that a Classroom Response System creates a more dynamic, interactive classroom experience which can be enjoyable and fun for both the instructor and students. These studies document an increase in attendance, participation, and learning.

As one instructor says, "My worst day with clickers is better than my best day without them."

There are two primary benefits of teaching with a Classroom Response System:

Each clicker device provides some kind of signal so the student knows which response was submitted and that the reponse was actually captured by the computer. Within the software, individual student responses are stored so that they can be graded outside of class. After all answers are received, the immediate feedback is provided by a histogram that illustrates the distribution of answers submitted by the entire class.

Watch and listen to students and teachers articulating why they value the use of clickers in their classrooms.

learn more about the advantages of Classroom Response Systems


How to Teach with a Classroom Response System

Fies and Marshall (2006) reviewed the literature and found great agreement that classroom response systems promote learning when coupled with appropriate pedagogies. ConcepTests, Just-In-Time Teaching, Interactive Lectures and Cooperative Learning are perhaps the most common pedagogies used but instructors have also combined the technology with classroom experiments and Interactive Lecture Demonstrations.

Most Classroom Response Systems can be integrated with PowerPoint such that a traditional slide is easily converted into a question. However, PowerPoint is not necessary because each system can be used as a stand-alone program with questions either created and saved before class or created spontaneously in class. Clickers are not just for large classes; they are equally (but differently) effective in small classes. Determining the pedagogical approach and understanding the technical implementation are keys to successful use of clickers.

learn more about how to teach with a Classroom Response System