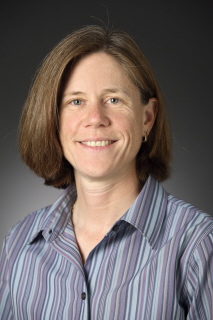 KimMarie McGoldrick is Professor of Economics at the University of Richmond, in Richmond, VA. She earned her Ph.D. in economics from SUNY Binghamton in 1992.

is Professor of Economics at the University of Richmond, in Richmond, VA. She earned her Ph.D. in economics from SUNY Binghamton in 1992.

KimMarie is active in faculty development programs, focusing primarily on mentoring and economic education. KimMarie served as a member of the American Economic Association's Committee on the Status of Women in the Economics Profession from 1999 through 2004. A major component of this committee's mission is to mentor young women in the discipline. In 2003 she was the co-recipient of an NSF ADVANCE Leadership Award: CeMENT: Workshops for Female Untenured Faculty in Economics (SBE-0317755). Her role in this project has been to develop and facilitate mentoring programs for female economics faculty in institutions which place emphasis on both teaching and research. KimMarie's focus in economic education has led to the (co-) development of a number of economic education workshops including Service Learning in Economics, five Annual Teaching Workshops held in Wilmington NC, and she served as an instructor in the the NSF funded Teaching Innovations Program (TIP).

KimMarie's primary research interest focuses on a wide range of topics related to economic education. Her pedagogical research has lead to a number of publications documenting pedagogical practices within the discipline and describing the use of nontraditional teaching techniques such as service learning. She has co-edited two volumes with the University of Michigan Press: Putting the Invisible Hand to Work: Concepts and Models of Service Learning in Economics (2003 with Andrea Ziegert) and Feminist Pedagogy in Economics (1999 with April Aerni). Her most recent work includes an edited volume (with David Colander) on Liberal Education and the Economics Major (Educating Economists: The Teagle Discussion on Reevaluating the Undergraduate Economics Major. Aldershot: Edward Elgar Press, 2010) and the edited volume (with Gail Hoyt) The International Handbook on Teaching and Learning Economics (Aldershot: Edward Elgar Press, 2011).

KimMarie has won a wide range of teaching awards including the Robins School of Business Outstanding Teacher Award, the University of Richmond Outstanding Educator Award, and in 2008 she received the highest honor an educator can receive in Virginia, the State Council of Higher Education of Virginia's Outstanding Faculty Award. In 2009, she received the Henry H. Villard Research Award in Economics Education (from the National Association of Economic Educators) and the Kenneth G. Elzinga Distinguished Teaching Award (from the Southern Economic Association).