Earlier this year, I wrote in this very space:

...many Earth processes of global significance... have [the] effect of redistributing energy away from localities of high energy concentration towards localities of lower energy concentration. The net effect is a more dispersed spatial distribution of energy....Weathering and erosion have the net effect of breaking up over-concentrations of gravitational potential energy (aka mountains) and dispersing that energy in the form of kinetic energy of sediment particles down the mountainside and across the lowlands to the sea.

I believed what I wrote, one hundred percent--in an intellectual sense, that is.

Then I went to Alaska, to the Kenai Penninsula and the Aleutians--and now I really believe it. There, where the Pacific Plate is subducting beneath the North American Plate, the battle of the forces of uplift and construction versus the forces of erosion and destruction is playing out on a grand stage. 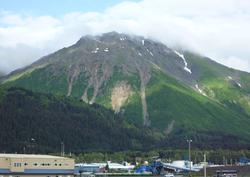 The Kenai Penninsula, adjacent to the site of the Great Alaska Earthquake of 1964, has uplifted as much as one meter since 1964. This photo above the port of Seward shows mass wasting clawing away at the mountainsides.

The Aleutians are a volcanic island arc, being built up by vulcanism and tectonic uplift and torn down by erosion. This photo, taken from the entrance to Dutch Harbor of the Aleutian island of Unalaska, shows an entire mountainside that has mass-wasted into the ocean.

In the context of Earth & Mind, two things struck me about these Alaskan views.

First, is that the very act of writing the words quoted above and thinking the thoughts captured in that blog post, changed the way I see the world. Of course I had seen erosion and landslides before, and taught about erosion, and showed Girl Scouts and teachers and students erosion on local field trips. But on the Alaska trip, which followed soon after my obsession with the energy transformation line of thought, I didn't just see mountains, I saw huge pile-ups of gravitational potential energy. I didn't just see landslide scars, I saw the trace of gravitational potential energy morphing into kinetic energy and dissipating across the landscape. A change to my mental model steered my vision to see differently.

Second, is that scale is huge. I took these photos standing on the bridge deck of the Healy, the largest ship I have ever sailed on, and yet these features towered over me. I was in the same position as geologist James Gilluly in my previous blog post, as we each shifted our worldview in the face of the enormity of earth features seen with one's own eyes rather than through representations.

Hi Kim, When I take my introductory courses on field trips (a road trip through Yellowstone, a hike into the mountains), I have the students keep a journal of all the evidence of the titanic forces that uplift mountains and the inexorable processes that tear them down. During the course of a drive or a hike students will note things like towering cliffs, talus slopes, waterfalls, V-shaped valleys and cascades in rivers, sharp ridges (aretes), lobate landforms (moraines or toes of debris flows), faults (sometimes with scarps indicating neotectonic movements) ..., the list of potential observations is endless. During lunch or at the end of the day we'll have a report out about all the types of evidence that was observed (this is done to try to keep the students engaged and interested throughout the day...sometimes I use bribes like food treats to reward the student with the most comprehensive list). Ultimately, the converstation must zero in on the energy of the Earth system, how it is distributed, how it is translated into work that we know as geologic process, and ultmimately to questions about rates of uplift v. rate of denudation. Which forces are "winning" in a given area? Catastrophism v. uniformitarianism also emerges--is more work done in very small increments over long periods of time or in sudden, episodic bursts of energy (earthquakes, floods, landslides)? Weighty questions that can be considered by introductory students if they look for the evidence in Nature around them.

We just had a massive rock fall of a boulder the size of a school bus hit the dam that forms Ennis Lake along the Madison River. For safety, the lake is being drained ~9 feet to ease the pressure on the damaged dam, but just imagine the liberated potential energy if the dam had failed and Ennis Lake had drained!

To misquote "All the President's Men": "Follow the energy"--in the Earth system to see the magnitude and frequency and impacts of the work that is being done!

As I've said before, I sure wish that I had had you as a teacher. Your field reflection technique with your intro students sounds wonderful.

I would like to find a book or reading that would help my "Teaching & Learning Concepts in Earth Science" students (pre-service teachers) perceive the natural world through this energy/entropy viewpoint. I looked through my collection of Intro level Geo and Earth Science textbooks that publishers keep sending me, and none takes this perspective. There are several that, on the specific topic of erosion and mountain building, talk about the balance or battle between forces of construction and destruction, but none cast this in terms of energy. I can make this point myself in discussion, but it is a rare high school teacher who would teach a topic in a way that is so far out of alignment with the way it is explained in the textbook.