At the recent Spatial Cognition 2010 conference, I found myself in an similar position, telling the familiar story of the geological history of the Pacific Northwest from the point of view of spatial cognition. I organized a geology field trip to Mt. Hood and the Columbia River Gorge for four cars-full of cognitive scientists, around the theme of how geoscientists use spatial information and spatial lines of reasoning to make inferences about Earth processes and Earth history. Reaching across the chasm between our disciplines, we shared ideas about how to make meaning from observations of size, shape, position, trajectory, orientation, configuration--how temporal/spatial relationships inform hypotheses about subduction vulcanism versus hotspot vulcanism, how the size of crystals in igneous rocks provides information about environment of formation, how cross-cutting relationships in an outcrop constrain sequence of geological events, and so on. 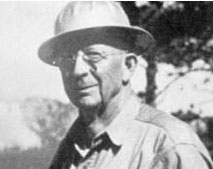 J. Harlen Bretz <image info>
Preparing for the trip gave me an opportunity to learn more about the work of J. Harlen Bretz, a giant among geological spatial thinkers. Bretz assembled and defended the hypothesis that the Pacific Northwest had been swept by enormous floods, which carved the scablands of Idaho and eastern Washington and reshaped the Columbia River gorge. He and other researchers concluded that the southern extremity of the Pleistocene continental ice sheet had formed a temporary dam, impounding a huge volume of water into a temporary lake, Lake Missoula. Repeatedly, the ice dam ruptured, sending huge floods westward across Idaho, Washington and Oregon. On our field trip stop at the Rowena overlook, we could see a gravel bar big enough to site a small town, 600 foot high cliffs and plateaus swept clear of soil, and a round lake formed by an underwater vortex or "kolk."

Much of Bretz' field work was done on foot, at first because he couldn't afford a car, and then later because the rugged terrain of the scablands wasn't suitable for motoring. Bretz described his field area and his field technique:

"Like great scars marring the otherwise fair face of the plateau are these elongated tracts of bare, or nearly bare, black rock carved into mazes of buttes and canyons... With eyes only a few feet above the ground the observer today must travel back and forth repeatedly and must record his observations mentally, photographically, by sketch and by map before he can form anything approaching a complete picture." (Bretz, 1928, quoted by Allen et al, p. 31)

Specialists who student the spatial cognition that underlies human way-finding make a distinction between learning an environment by moving through it and learning the same environment by studying a map. As one moves through a space or across a terrain, observations made from the human-eye vantage point provide "route knowledge" of the relative location of features observed along the route. It is possible, but challenging, to assemble information gathered along multiple intersecting routes into an overview mental image of how the observed features fit together in plan view. Such knowledge is called "survey knowledge." When cognitive scientists test participants' ability to combine observations from multiple routes into survey knowledge, they might ask people to combine three routes, each a few kilometers long at most, each traversed over a few tens of minutes.

In contrast, read the description by geologist Aaron Waters of how Bretz combined thousands of miles of route knowledge to build his survey knowledge:

"With Landsat photographs and detailed aerial photos it is easy for us now to see the nature of the scablands...the giant ripples and other small-scale features 'prove the case.' But Bretz did this with the aid of only an agile an well-disciplined mine, and a pair of legs that were pushed over thousands of weary miles." (Aaron Waters, quoted by Allen et al, 1986, p 32)

The scablands area is 200 kilometers across. The big picture encompassed by Bretz' hypothesis spans nearly 1000 km from the headwaters of ancient Lake Missoula to the current city of Portland. 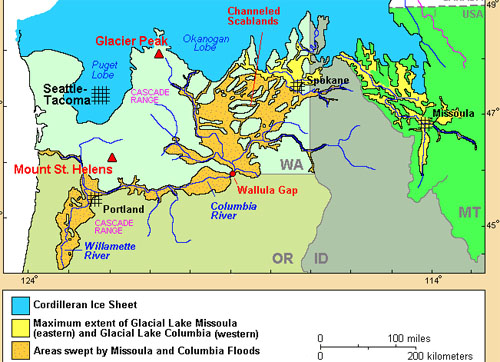 Bretz began to assemble his idea as a high school biology teacher in the early 1900's. He went back to school to get a PhD in geology in 1913, and then continued to compile evidence and defend his case for decades. A field expedition in 1952, by which time Bretz was nearly 70 years old, was a turning point. Allen et al (1986) describe the conversion of one of the doubters, the eminent geologist James Gilluly:

"...when Gilluly finally took the opportunity to see the area for himself, he was startled to realize how little maps and measurements had done to suggest the actual size of things."

"A.C. Waters was present and tells the story: 'Giluly was greatly surprised by the overall scale of the Scablands feature: the breadth and depth of the water-torn coulees, the fills of coarse outwash gravel topped by giant ripple marks, the huge abandoned cataracts, dry waterfalls, and deep plunge-pool basins left by the Pleistocene floods. As he gazed upward to the 600 foot brink of Palouse Falls--over which the diminutive Palouse River tumbles in a narrow 6 foot wide ribbon, making only a delicate tinkle, as it dimples the placid surface of the huge plunge-pool below--Gilluly's expression changed from a look of astonishment to a broad grin. Clearly his mind had reconstructed the wild surge of a thrice-swollen Columbia River leaping from the brink with a roar of ten thousand Niagaras. Then he spoke loudly--perhaps competing with the noise of that vanished waterfall--"How could anyone have been so wrong?" His conversion--like Paul's on the road to Damascus--was sudden and complete.' " (Allen et al, 1986, p. 69-70).

Cognitive scientists have an idea called "embodiment" or "embodied cognition," which holds that the way people think is deeply influenced by the form of the human body. As a consequence, cognition is "situated." It takes place in a specific environment, which is perceived by the body's senses and traversed by the body's motor system. Gilluly was no easily-fooled novice, incapable of reading a map right. He was the 1958 Penrose award winner, a member of the National Academy of Sciences, and the author of one of the first widely used geology textbooks. He had been following the Scablands controversy at least since 1927, when he participated in a critique of Bretz' work at a meeting of the Geological Society of Washington. And yet it was only when he himself was standing amid the full-scale evidence, seeing it with his own binocular vision and measuring it against his own height and stride, that his mind "reconstructed the wild surge..."

Thanks to: Friend and fellow geologist Rachel Haymon, who helped me scout the field trip and brought me to great localities I wouldn't have found on my own; psychologist Tim Shipley, conference co-organizer, who invited me to run a geology field trip in association with the Spatial Cognition conference, reassuring me that conference-goers would find it interesting.

A personal connection: According to Allen and Burns (1986), the last prominent hold out to Bretz' hypothesis was Richard Foster Flint of Yale, with whom I studied as an undergraduate. It wasn't until 1971, the year I started at Yale, that Flint put one grudging sentence about the Lake Missoula floods, into the third edition of his Glacial and Pleistocene Geology textbook. I don't recall hearing anything about the floods as an undergraduate.