One of the claims that geoscience educators make when defending our field as part of a liberal arts education is that students will have a better understanding of the Earth around them; they will see landscapes and earth processes differently, more profoundly, more insightfully.

My own foray into cognitive science seems to be having the same effect on me: on my various trips this summer, I caught myself looking at landscapes differently. But this was a different "different."

On a flight from Salt Lake City to Portland Oregon, I woke up from a nap and looked out the window to see a flat terrain speckled with discrete dark patches (click photo to enlarge). The patches had irregular edges and varied in size.

My first sleepy interpretation was that we were flying over a landscape pockmarked with lakes, as I had seen flying over Minnesota and Ontario. Then the brain woke up enough to protest that we were too far south for that kind of glaciated terrain.

Then, I thought perhaps I was seeing dark forested patches.

Then, the frame of my perception shifted. My perceptual system, trained in solid earth science, had been doing its best to "see through" the white fluffy clouds to the landscape below. But now, with a clunk like a different microscope lens rotating into place, I saw the dark patches as shadows, each cast by an individual cloudlet. Each peninsula and embayment in the dark patches on the ground could be matched with a corresponding curve of cloud outline. 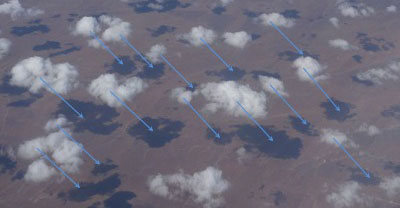 The next thought that raced through my awakening brain was "Oh, that was my projective spatial concept clicking into place."

"Projective spatial concept" is one of three spatial concepts described by the pioneering developmental psychologist Jean Piaget as essentials that children must master as they learn to function and thrive in the three dimensions of experienced reality. 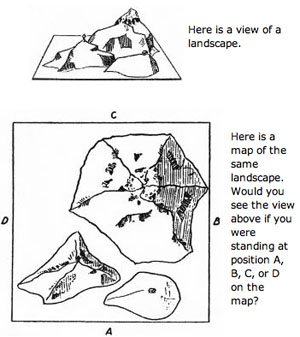 In the second type of test, participants are shown an object and a light source and a surface. They are asked to sketch or identify the shape of the shadow that would be cast by the object on the surface, given a certain configuration of light/object/surface. This task has been tried on college students as well as children, and presents difficulties for a substantial fraction of undergraduates. 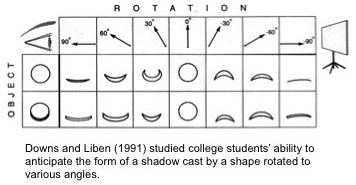 It is not totally obvious to me why these two tests are considered to be tapping into the same cognitive process or concept. One way that I can make sense of this is to conceive of the projective spatial concept as a subspecies of naïve physics, an operational version of basic optics encompassing raypaths, shadows, and reflections.

In any case, that shadow-recognizing aspect of the projective spatial concept seems to be what clicked into focus for me in that day in that airplane. Just as the advocates of liberal arts education would claim, my enjoyment of the trip was enhanced by both my ability to interpret the features of nature out the window, and by my ability to interpret the thought processes involved.

Projective spatial concept is key to many representations favored by geoscientists. Perhaps the most obvious example is the use of map projections to represent the features of a near-spherical globe onto a flat map. Imagine a light bulb at the center of the globe in the diagram below, casting (or "projecting") shadows through the globe onto the cylinder.

Dave Mogk reviewed other use of projection in geosciences in a recent AGU talk. These include the equal area and equal-angle stereonets used in structural geology and crystallography, phase diagrams used in petrology, and Piper diagrams used in hydrology.

Cognitive scientists have shown that many people, including many college students, have difficulty with tasks calling on projective spatial concept (e.g. Merriwether & Liben, 1997), so we shouldn't be surprised when students find these kinds of representation hard to interpret. Maybe a collaboration between science teachers and art teachers would be a way to tackle projective spatial concept.

P.S. Looking for a good hyperlink for Jean Piaget, I learned that was an expert on mollusks before he became an expert on children (more here), beginning as a teenager at the Natural History Museum in his home town of Neuchatel. That museum has extensive fossil collections, so perhaps he thought about paleontology as well. I wish we could have had him join our conversations about Earth & Mind.