Improving of student accuracy at determining soil texture by feel 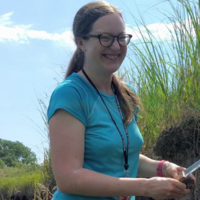 Rebecca Young, University of Nebraska at Lincoln
Determining the soil texture by feel is an important field skill for soil scientists and other earth scientists, but it is difficult for students to master. Current instructional tools include flowcharts and keys that guide students to identify the textural class. These rely on subjective observations of the soil that can be confusing to students, such as whether it is "somewhat" or "very" gritty. The hypothesis of this study is that a quantitative approach to texture-by-feel will be easier for students to learn because it is less subjective and allows for more informative feedback, including the direction of magnitude of errors. We have developed methods for estimating sand and clay percentage directly. Sand is estimated visually, by washing the sample in the palm of the hand to remove silt and clay, then comparing the remaining sand to a photo reference chart. Clay is estimated through the ribbon test, in which the sample is pushed between the thumb and fore-finger forming a ribbon. Soils with more clay produce a longer ribbon. Students self-calibrate by measuring the ribbon length on a set of standards and determining the regression equation relating ribbon length to clay percentage. The sand and clay percentages can be used to read the texture triangle and determine the textural class. Preliminary results indicate that the quantitative approach to texture-by-feel can be accurate and easy for students to learn.
« View More Poster Sessions