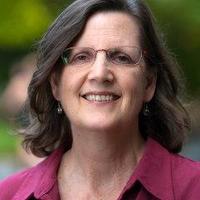 If circumstances permit, I will set up a gelatin volcano at the Rendezvous. I will also show video of the activity shot during actual lab sessions this spring, and engage participants in discussion of various applications of the activity.

"Volcanoes" are formed from bowls of gelatin inverted onto pegboard. "GPS stations" (pushpins) are installed and "housing developments" (Monopoly™ houses and hotels) are built. Then, "magma" (colored water) is injected through the pegboard into the bottom of the volcano.* The transparent gelatin enables observation of the formation of dikes that propagate laterally, often far enough to intersect the flank of the volcano and generate "lava flows." With time, new injections tend to feed established dike paths rather than making new ones – thus setting up a "plumbing system" within the volcano. The flanks of volcano can become unstable and generate "landslides."

This activity serves as a model for the formation of dikes and dike systems that build up volcanic edifices and feed lava flows. Looking at the final model in plan view, for example, makes the geologic map of Hawaii take on new meaning - especially the rift zones of Kilauea and Mauna Loa. Students are able to investigate and better understand the mechanics of dike formation and propagation; lava flow hazard and risk; and the generation of precursor ground deformation and seismicity. (Activity inspired by http://www.spacegrant.hawaii.edu/class_acts/GelVol.html)

We use this as a lab activity in our Natural Hazards course for non-majors, when studying Hawaiian-style volcanism.

This activity is one of our most popular and memorable labs. Students are actively engaged in not only the excitement of the activity itself, but also in predicting what might happen, and then trying to understand what actually does. This activity also lays the groundwork for future course on analyzing lava flow risk in Hawaii and ground deformation associated with the 2010 eruption of Eyjafyallayokull.