Skip to Main ContentSkip to Navigation
Your Account
Dr. McConnell discusses why he started using ConcepTests. (1:42 min) Part of the MERLOT Elixr Case Story on ConcepTests.
Peer instruction introduces the use of conceptual multiple choice questions, ConcepTests, that are initially analyzed by students working alone, and then in a pair or a small group. The use of conceptests has proved successful in:


The teaching strategies used in the implementation of ConcepTests and peer instruction mirror the principles of good practice in undergraduate education defined by Chickering and Gamson (1987) and validated by extensive research (Sorcinelli, 1991). The proper execution of ConcepTests and peer instruction results in the application of their seven principles as follows: 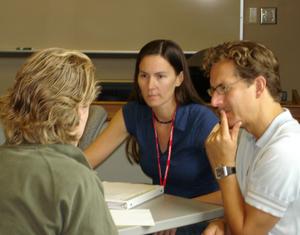