Teaching About River Systems to High School and Undergraduate Students 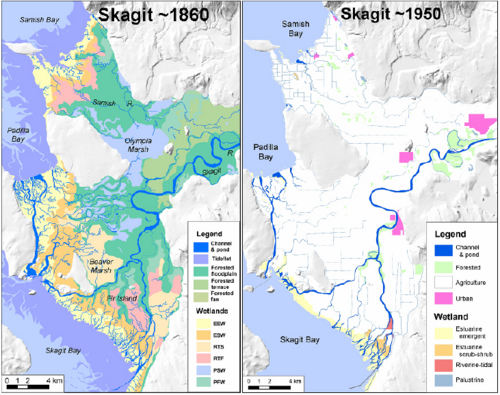 With collaborators from the University of Washington, we have designed a curriculum on the subject of environmental restoration in the Puget Sound area of Washington State with an emphasis on river geomorphology and its systemic relationship to biodiversity and to the history of human interaction with the environment. There is a high school and undergraduate version of the curriculum. The high school version is in the process of being implemented on an Indian reservation near Seattle and the undergraduate version is being implemented in a University of Washington spring quarter course co-listed through the Departments of Earth and Space Sciences and American Indian Studies.

The curriculum aims to build student understanding of these systemic relationships through a combination of lectures, case studies, field trips, and analyses of GIS-based river basin data produced by the University of Washington's River History Project . The GIS map layers show changes to the rivers and the surrounding land starting in the last Ice Age up to the present time, using a combination of historical survey maps and geospatial data sets. Figure 1 shows an example.

Students learn the history of manipulations of the rivers by white European settlers, the impacts of those manipulations on the biodiversity, and what scientific and policy challenges face contemporary decision-makers about how to address the problems introduced by these manipulations (e.g., extreme flooding events, loss of native plant species, pollution, loss of salmon habitat, loss of economic options for the region's Indian communities). The course addresses:

The course also addresses how different characteristics of the environment are measured. Students are introduced to the challenges of how geospatial data are interpolated and the implications of these different interpolation methods on making evidence-based conclusions.

The high school version of the curriculum shares the broad goals of the undergraduate version but strips the content down to big ideas:

It is being piloted in classes composed of large numbers of at-risk students. Through field trips and small group hands-on classroom tasks, the students identify systemic interrelationships among different environmental factors. They apply these understandings to analyzing potential policy options for local environmental restoration.

Tasks are scaffolded to support deep student thinking. For example, in a brainstorming activity that asks students to identify the effects of what settlers of European descent did to the rivers of the Puget Sound, students are provided with a list of effects that they need to connect to lists of causes, then explain their reasoning for each connection. The presentation of selection choices is a scaffolded alternative to simply asking students to come up with open-ended explanations of impacts. The use of selection as a scaffold is also applied to the objective of getting students to think about policy options for their tribe for environmental restoration. Choices of possible restoration policies are presented and students select from the choices. However, before selecting, they make a list of questions for which they would want answers before making a final decision on which choice is best. Then, the process of decision making is further scaffolded by being broken into two stages. The two stages are represented by two different yet related evaluative questions: "How would your choice serve the tribe the best?" and "Why would your choice likely be the one that is most successful?"

Both the high school and undergraduate versions introduce important concepts through analogies. In the undergraduate lesson about alternative futures for environmental systems, students are presented with analogous alternative future scenarios pertaining to unrelated topics (e.g., the relationship between taxation policies and school funding in a particular community and the relationship between the economic health of polluting companies and the physical health of community members affected by the pollution). The point of first introducing these less cognitively demanding analogous scenarios that call up prior knowledge is to cultivate in the students a deep understanding about how alternative future scenarios represent the interests of different stakeholders in a particular system and how analysis of findings from the alternative future models present an opportunity for different stakeholder groups to negotiate policies that serve their mutual interests. By presenting the less cognitively demanding analogous scenarios first, the curriculum makes it easier for students to understand the essential characteristics of alternative future modeling first, then apply that understanding to the more cognitively demanding topic of river restoration.

In the high school version of the curriculum, this practice of introducing less cognitively demanding analogies about a big idea prior to engaging students in thinking about the big idea is applied to the broad theme of what constitutes a system. A definition of how a natural environment is a system is introduced, followed by references to other examples of systems such as the human body, a business, a machine, and an ocean.

Students are asked to pick one of these examples and explain how it is a system, then think of a different system and describe its interrelated characteristics. Hence, the scaffolding occurs through the process of prompting selection followed by generative brainstorming. Once these preliminary broad exercises are carried out for thinking about the nature of the system, the more cognitively demanding task of understanding how the students' river-dependent natural environment is also a system is introduced.