What is Reformed Teaching?

Reformed teaching advocates that that classes be "taught via the kinds of constructivist, inquiry-based methods advocated by professional organizations and researchers" (MacIsaac and Falconer, 2002). Reform signals a paradigm shift from the traditional teacher-centered lecture-driven class to a student-centered, activity-based learning environment that typically includes multiple opportunities for collaboration among students. 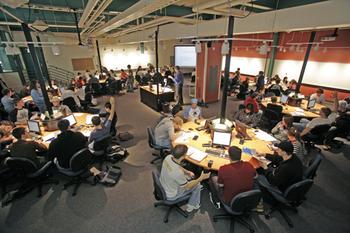 Reformed teaching emerged from the principles of effective teaching introduced in 1988 by the American Association for the Advancement of Science's report on the state of science teaching in American educational institutions, Project 2061: Science for all Americans (more info) (AAAS, 1989).

These principles state that teaching should:

In addition, reformed teaching establishes that students use data to justify positions, experience ambiguity as a result of learning, and learn from one another (Sawada et al., 2002).

A Method for Measuring Reformed Teaching

The On the Cutting Edge: Classroom Observation Project, aims to move beyond faculty self report by providing a direct measurement of changes in teaching practice. The Reformed Teaching Observation Protocol (RTOP) was selected as the instrument to measure reformed teaching. RTOP provides a standardized means for detecting the degree to which classroom instruction uses student-centered, engaged learning practice (see Lawson and others, 2002; MacIsaac and Falconer, 2002; Sawada and others, 2002). RTOP has been used to analyze the impact of the National Academies Summer Institute on biology instruction in large classes at research universities (Ebert-May, pers. comm.) as well as to better understand students experiences in introductory geology classes see GARNET Geoscience Affective Research NETwork.

The Arizona Collaborative for Excellence in the Preparation of Teachers (ACEPT) program was funded by NSF in 1995. ACEPT's intent was to improve instruction in undergraduate science and mathematics courses at Arizona State University and nearby community colleges. ACEPT organized a series of summer workshops to train instructors in the use of reformed teaching strategies in classes that included preservice teachers.

ACEPT's Evaluation Facilitation Group (EFG) were tasked with assessing the success of the program and developed the Reformed Teaching Observation Protocol (RTOP) to accomplish this task. The development of the rubric focused on the question, "How would you know if a mathematics or science classroom was reformed?" The EFG developed RTOP from two instruments: the Horizon Research Inc. instrument and a classroom observation instrument developed locally by ACEPT co-PI Dr. Anton Lawson (1995) of ASU Biology Department. Items that did not focus strongly on reform were eliminated. RTOP measures the extent to which a classroom instructor engages in teaching strategies that build student content knowledge in a manner consistent with reformed teaching.

The original RTOP instrument is a holistic measure of the presence/absence of specific teaching strategies divided into five subscales (Lesson design and implementation, Propositional Knowledge, Procedural Knowledge, Student-teacher classroom interaction, Student-student classroom interaction). Each subscale features 5 items each that are scored on a scale of 0-4, for a maximum possible score of 100 points. Since its development, the RTOP instrument has been widely used in assessing instruction in a variety of disciplines and levels of education. The critique provided by RTOP allows instructors to gain insight into their own teaching practices.