This webpage describes the early water-quality problems associated with industrial discharge into Horn Pond and the wells built around Horn Pond in the early 1900s. 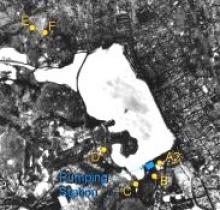 Horn Pond is now a public park and conservation area, but its history and use as a source of public water indicates a less pristine past. After the Civil War, Woburn began developing a public water supply system to serve its growing population. The early wells that were used to extract ground water for distribution throughout the city were drilled around the perimeter of Horn Pond. It is speculated that the officials responsible for developing the early wellfield intended to use the underlying sands and gravels to filter the surface water that was drawn down into the aquifer from the pond by pumping.

The defendants, W.R. Grace & Co. and Beatrice Foods, Inc., retained consultants to research the industrial history of Woburn and the history of its water supply to demonstrate the long history of contaminated water in the city. Professor Joel Tarr of the University of Pittsburgh wrote a report for W.R. Grace detailing the history of Woburn's water supply system and the history of ground-water and surface-water pollution in Woburn Tarr, 1987 (Acrobat (PDF) 31.1MB Jun19 09). The report describes the historic, deleterious effects on the quality of water in Horn Pond caused by the tanneries (acids and salts), piggeries (nitrates and bacteria), and chemical companies (sulfates, chlorides and manganese) that thrived in Woburn in early 1900s. The report does not present any citations to chlorinated solvents present in the Woburn water supply, including Horn Pond, until the 1960s - 1980s when solvents were found near wells G and H in the Aberjona River valley. More information from this insightful report can be accessed under Woburn's Industrial History and under Woburn's Water Supply System. 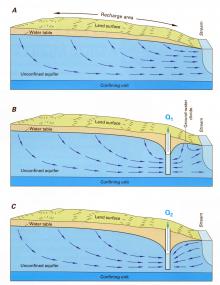 When evaluating the quality of drinking water in Woburn, historical and related to the operation of Wells G and H, understanding induced infiltration from surface water to ground water is an important hydrologic concept to explain how contaminants may have entered the ground-water flow system and impacted the water supply. Induced infiltration from rivers and streams, specifically from the Aberjona River, is the subject of Learning Module 7.