History of Leather Tanning in Woburn

One of the defendants in the Woburn case was a leather tanning site. The town had a long history (and pollution legacy) from leather tanning at the site. In the mid 1860's Woburn Massachusetts became famous for its leather tanning. By 1884, 26 large tanneries employed 1500 people. The tanning industry fueled the local economy and spurred a related chemical industry to supply the chemicals needed for tanning.

The leather tanning and related chemical industries also left a legacy of industrial pollution in the area. Leather tanning was a prime source of pollution in the Aberjona and tributaries as early as the 1800's. Pollution conditions noted at the time were discoloration of the water, extensive fish kills, and cattle have refusing to drink the water of the Aberjona River", according to an EPA Report titled, "Wells G & H Site Remedial Investigation report Part 1, Woburn Massachusetts, Vol 2, p. B-34. At the time, investigators were particularly concerned about the spent bark liquor that injured vegetation and "water-washing, lime, hen-manure and fleshing" that caused odors. In addition, some of the tanneries disposed of their "liqour refuse" by keeping it pits which would soak in to the soil. The water of Russell Brook, the location of many of the tanneries, was particularly polluted.

In response to the pollution, the Massachusetts General Court, passed two pieces of pollution control legislation, one in 1907 for Russell Brook and one in 1911 for the Aberjona River. This legislation prohibited discharging any substance that might be injurious to public health or create a public nuisance. A fine of no more that $500 was established for each offense.

In the years 1911-1956, tanneries pollution continued to be a problem. According to the MSDH, the tanneries were reluctant to build individual water treatment works because they thought that a municipal sewer would be built. 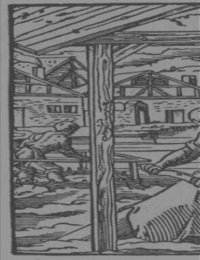 Tanning is a general term used for the process of converting animal skins to finished leather. Animal hides and skins absorb tannins to keep them from decaying and to keep them pliable. Technically, the term "tanning" refers to the process by which collagen fibers in a hide react with a chemical agent (tannin, alum or other chemicals), but the term leather tanning also commonly refers to the entire leathermaking process.

First animal skins or hides are "cured" by wet-salting or brine-curing. Then the hides are soaked in water for several hours or days after which the remaining flesh is removed. At that point, the hair is removed by soaking the hide in a mixture of lime and water and then removing the hair from the hide. After the hide is cleaned, the hides are delimed in an acid vat and treated with enzymes to smooth the grain and make the leather soft.

At this point, the hides are "tanned". Traditionally, leather was tanned using vegetable tannins. This process is still used for some hard leathers. In vegetable tanning, hides are hung on large frames, located inside large vats, and exposed them to tannin, a natural product found chestnut, oak and hemlock trees. Hides are transferred to many different bins during this step, each containing a stronger solution of tannin.

By the early 1900's, chromium salts were used instead of vegetable tannins for much of the leather production. In this process, hides are pickled in an acid and salt mixture and then soaked into a chromium-sulfate solution. This process is much faster than vegetable tanning, often completed in one day.

After tanning, the hides then go through a dyeing process which adds moisture back into the skin. Hides which have been vegetable tanned are bleached and them soaked with oils, soaps, greases and waxes to make them more pliable. The leather is then rolled through a machine, stretched and dried. The final step in the tanning process is called finishing the skin. the grain surface is covered with a chemical compound and brushed. At the very end, waxes, pigments, dyes, glazes, oils, waxes and other solutions are also added to make the leather depending on what is needed in the final product. 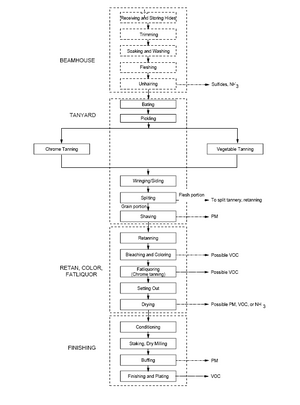 Hide
General Flow Diagram for Leather Tanning and Finishing Process
Leather Tanning uses numerous toxic agents for soaking the hides. Consequently, disposal of wastewater was a pollution hazard, particularly prior to modern environmental regulations. In addition, since the leathers are made from animal hides, the disposal of waste hairs and animal flesh were also a source of pollution.