Confusion over the Aberjona River 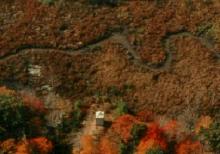 Well H is adjacent to the wetland and within 60 feet of the Aberjona River
One of the major discrepancies among the three expert hydrogeologists testifying in the trial was the role of the Aberjona River played in the local groundwater flow system. The judge was even baffled by the incongruence in the testimony about the river, as described in newspaper articles written on May 14, 15, and 16, 1986. No doubt, the jury was confused too.

The river and its wetland are within several tens of feet of well H and a hundred feet or so of well G. Armed with the same site-specific stream gaging data and water-level data collected by the U.S. Geological Survey in 1985 and early 1986, one expert claimed that no water from the river reached either municipal well when the wells were pumping, one expert claimed that the river was a groundwater divide preventing groundwater under the west side of the river valley from flowing under the river to wells G and H on the east side of the river valley, and the third expert witness testified that approximately 50 percent of the water pumped by wells G and H was derived from the river. Hydrologically, the difference in these three interpretations were substantial. In terms of the trial, understanding the role of the Aberjona River was critical to delineating flowpaths and computing traveltimes of contaminants from the defendants' properties to wells G and H, which were the focal points of Phase I of the trial that the jury would have to decide. 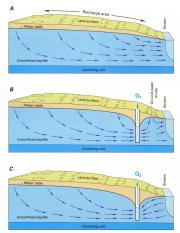 Schematic diagram showing how induced infiltration of surface water can flow to a nearby pumping well
About a year after the trial, the U.S. Geological Survey published its analyses and interpretations of the stream gaging and water-level data made available for the trial (Myette et al. 1987 ). Exploration, analysis, and interpretation of these data are the focus of Learning Modules 5, 6, and 7 within this website. Additional information about the Aberjona River can be obtained from this link to the U.S. Geological Survey.