Hide
Figure 1. Location and characteristics of the Obersulzbachkees landsystem and the hydrological monitoring (left). 3D model of the landsystem with the proglacial lake in the centre (view to south-east, aerial images from 2009). The lake has an area of ca. 95.000 m² and a volume of > 2 Mio. m³ (Kum 2010). The hydrological monitoring station was installed ca. 750 m downstream of the lake. At August 26th 2011, water samples were taken synchronously every 2 hours from 09:00 to 15:00 at the monitoring station and upstream of the lake. Details

Hide
Figure 2. Detailed view of the instrumentation at the monitoring station downstream of the proglacial lake (see fig. 1 for location). Intake tube and turbidity sensor are fixed in a downstream orientation at a large boulder ca. 40 cm above the channel bed (left, view to south-east, image taken at August 14th 2010, 12:00, discharge is ca 1.9 m³/s). The optical turbidity sensor measures the light scattered by particles in the water. The automatic water sampler flushs the intake tube prior to and after pumping and logs turbidity records (right). Note the stable and vegetated channel banks at both sides. Details 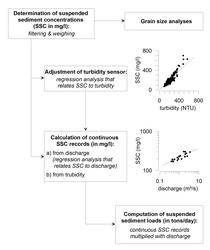 Hide
Figure 3. Flowchart of the workflow to calculate sediment loads from measurements of discharge, suspended sediment concentration and turbidity. After suspended sediment concentrations (SSC) and grain size distributions had been determined, continuous SSC records were calculated from turbidity and discharge measurements. Sediment loads were then computed by multiplying continuous SSC records with discharge. Details 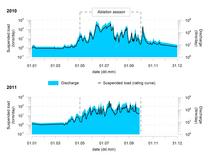 Hide
Figure 5. Suspended sediment loads depicted in tons per day and discharge displayed in litres in 2010 (top) and 2011 (bottom). Loads presented were computed from continuous 15 minute SSC and discharge records resulting in 15 minute loads (kg) which were summarized and converted to daily loads in tons. Rating curves were used to calculate a continuous record of SSCs from discharge (see fig. 3). During the 20 months of monitoring (January 1st 2010 to September 28th 2011), 18052 ± 210 t of suspended sediment were exported. Temporally, the majority was exported in the ablation seasons (May 1st to September 30th). Note that both axis of ordinates are log scaled. Details

Proglacial zones are newly-formed landscapes in transition from glacial to non-glacial conditions which are located in front of or just beyond the outer limits of glaciers. In the context of climate change and receding Alpine glaciers, the expansion and evolution of proglacial zones are of importance to assess the implications of accelerated deglacierization and discharge modification on sediment transfer from mountain to foreland zones. In particular, suspended sediment yields and sediment storage in expanding proglacial zones are considered to be highly sensitive to environmental change (Stott & Mount 2007). Increasing sedimentation of hydropower reservoirs that affects their lifespan and economic feasibility may be subsequent effects. Sediment yield from the proglacial zone depends on glacial sediment production and the efficiency of sediment transport and storage change within the proglacial zone. Thus, sediment yields provide insights towards the dynamic and (in)stability of proglacial landsystems.

We quantified suspended sediment yield from the Obersulzbachkees proglacial zone within a 20-month monitoring period (January 1st 2010 to September 28th 2011).

The Obersulzbachkees glacier covers the uppermost part of the Obersulzbachtal, a north-facing tributary of the Hohe Tauern Mountain Range in Austria (fig. 1). Since the late 1990s, the receding glacier has exposed a natural bedrock basin and a proglacial lake has formed that constrains sediment flux from ca. 19 km² of the landsystem. Approximately 750 m downstream of the lake, discharge is registered in 15-minute intervals at a governmental gauging station. Close to this station, we installed an automated water sampler and turbidity sensor at a stable cross section with turbulent flow conditions during the 2010 and 2011 summer periods (fig. 1 & 2). Water samples were taken every 1 to 9 hours and turbidity, which is a surrogate for suspended sediment concentration, was recorded every 1 to 5 minutes. On August 26th 2011, water samples were taken synchronously every two hours at the monitoring station and upstream of the lake (fig. 1). The calculation of sediment yield from direct measurements of discharge, suspended sediment concentration and turbidity required several steps shown in figure 3. At first, we determined suspended sediment concentrations (SSC) and measured the grain-size distribution of selected SSC samples. After that, continuous SSC records were calculated from turbidity and discharge records using rating curves. A rating curve is established by means of regression analysis that estimates the relationship between a dependent variable (in our case SSC) and an independent variable (discharge or turbidity) from a series of simultaneous measurements (fig. 3). Hence, it is a formula that relates SSC to discharge (or turbidity). The continuous SSC records were then scaled with discharge to compute daily loads.

Suspended sediment concentrations were in the range of 71.3 to 702.3 mg/l (average of 179.2 ± 67.4 mg/l) and showed inter-annual fluctuations and high seasonal to daily variability (fig. 4). These values are low, if compared with other proglacial environments, such as the Haute Glacier d'Arolla, Switzerland, average SSC ~ 1300mg/l (Clifford et al. 1995), or the Torrent du Glacier Noir, France, average SSC ~ 1700mg/l (Stott & Mount 2007). However, concentrations upstream of the lake are significantly higher (8 to 24 times) with greater diurnal variations. We compared the concentrations flowing into and out of the lake and found that SSCs are reduced by 88 - 95 % with median grain size diameters downsized from coarse to very fine silt. This explains why the concentrations measured downstream are low because the bulk of sediment is trapped in the lake. In total, 17826 ± 192 t (metric tons) (continuous SSC record calculated from turbidity) to 18052 ± 210 t (continuous SSC record calculated from discharge) of suspended sediment were exported during the 20 months of monitoring (January 1st 2010 to September 28th 2011). This mass equates to approximately 4 times the amount of gold currently stored in Fort Knox. It gets clear from figure 5 that the majority of sediment (94 %) was exported in the summer periods (ablation seasons). This is because discharge and sediment transport of the meltwater stream are strongly influenced by glacier melt. If we aim to compare our results with other proglacial environments, the absolute values of suspended sediment export need to be scaled to an annual area-specific sediment yield (SSY, expressed in t/km²/yr). Specific suspended sediment yield at the Obersulzbachkees was in the range of 517 to 523 ± 6 t/km²/yr and this is 4 to 8 times lower as compared to other glaciated catchments of similar size in the European Alps (data compiled by Einsele & Hinderer 1997).

Our study demonstrates that the connectivity between glacial sediment production and downstream sediment flux is significantly reduced by the development of proglacial lakes. A number of proglacial lakes have formed during the 20th century as a result of glacial retreat linked to climate change (e.g. Tsutaki et al. 2011, Schiefer & Gilbert 2008, Neal 2009). There is evidence that proglacial lakes will become more frequent in the future because many glaciers have receded in zones of converging ice flows where glacier-bed overdeepening is common (Egholm et al. 2011). Linsbauer et al. (2012) computed a terrain model of the Swiss Alps 'without' glaciers and detected 500-600 overdeepenings capable of forming proglacial lakes. If accelerated glacial retreat exposes natural basins capable of forming proglacial lakes, then the downstream hydrologic and geomorphic systems in such catchments will be significantly altered due to discharge modifications, sediment trapping, decoupling effects and long term sediment storage. Thus, scenarios of future sediment flux from any proglacial zone would depend critically on the potential development of a proglacial lake.

Acknowledgements
This work is part of an individual project of the University of Salzburg within within the collaborative research project SedyMONT (Timescales of Sediment Dynamics, Climate and Topographic Change in Mountain Environments, ESF TOPO-EUROPE programme, cf. www.sedymont.sbg.ac.at). Financial support provided by the Austrian Science Fund (FWF): grant number I 157-N19 is gratefully acknowledged. Warmest thanks go to David Morche (University of Halle, Germany), Marianna Lingg (University of Salzburg, Austria), Alexander Eder (Federal Agency for Water Management, Austria), Hans Wiesenegger and Barbara Staudinger (Hydrographical Service of the regional government office of the Land Salzburg, Austria) for assistance in the field and lab, valuable advices and data provision. We would also like to thank the Tauern National Park Authority for granting permission to perform this study in the territory of the National Park.