Hide
Figure 1. Location and simplified geomorphological setting of Pasterze glacier landsystem with indicated extent of figure 3 (left). View of the landsystem to north-northwest (top right, August 6th 2009) and panorama image of the proglacial zone (bottom right, view to northwest, August 2nd 2011). A distinct attribute of Pasterze Glacier is an extensive supraglacial debris cover. The Margaritze reservoir, from which sedimentation data are used, is located approx. 500 m downstream of the catchment outlet. The sharp contrast in vegetation cover marks the glacier extent of the 'Little Ice Age', a cooling period where glaciers advanced. Details 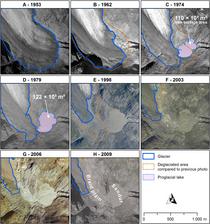 Hide
Figure 3. Time-series orthophoto maps showing the evolution of the proglacial zone from 1953 to 2009 (map extent is indicated in figure 1). Since 1953, more than 785 × 10³ m² of proglacial terrain have been exposed by glacial retreat. A proglacial developed that reached its greatest extent in 1979. The lake was filled to an outwash plain (sandur) within less than 20 years, what illustrates the rapidity of glacifluvial sedimentation. The sandur and a braid plain are key landforms within the proglacial zone modulating sediment yield. Details

Hide
Figure 4. Sediment yield (grey) and discharge (blue) summed up over each decade. The evolution of the proglacial zone derived from time-series maps (fig. 3) was interpreted towards the likely impact on sediment yield. In the 1960s, the lake trapped a lot of sediment but its trap efficiency decreases with proceeding aggradation. The valley floor exposed since the early 1950s is characterized by a very low slope gradient. We assume that the sediment delivery ratio has decreased with increase exposure of the valley floor. The significant increase in discharge since 1980s is in good agreement with higher temperatures observed. Details

Proglacial zones are newly formed landscapes in front of or just beyond the outer limits of glaciers (fig. 1). They are out of equilibrium with the current climate and therefore highly sensitive to climate change. The evolution of proglacial zones is of importance to assess the implications of climate-driven environmental change in high mountain systems, including the transfer of sediment to foreland zones. An example of the likely future impacts of climate change on suspended sediment yields from Alpine proglacial zones is the study by Stott & Mount (2007). They measured 3 to 4 times higher daily suspended sediment yields from the Glacier Noir proglacial zone (France) in the unusually warm 2003 summer period as in the same period of the cooler year 2004. Sediment yields are often calculated from direct measurements of sediment concentrations and discharge. This indeed allows to quantify contemporary sediment transfer patterns but cannot illustrate how these patterns have changed in time. An accurate way to measure long-term sediment yield is the measurement of sediment deposition in a reservoir (Einsele & Hinderer 1997).

In this study, we used reservoir sedimentation data to quantify sediment yield from the 40 km² Pasterze watershed located in the Hohe Tauern Mountain Range in Austria (fig. 1). More than half of the area is covered by the Pasterze, a typical Alpine valley glacier, and several tributary glaciers. Hillslopes and valley floor are covered by scree, glacial and fluvial sediments. In the early 1950s, a reservoir (0.2 km², fig. 1) was build ca. 500 m downstream of the catchment outlet. The operating company measured sediment input into the reservoir by annually repeating bathymetry surveys from 1956 to 2009. The sediment that enters the reservoir is mainly silt-sized and we converted the volumetric units of reservoir sedimentation into metric tons by a density of 1.35 t/m³ commonly used for fine grained sediment (Einsele & Hinderer 1997). Generally, sediment yield is a measure of geomorphic activity within a catchment. It depends, among other things, on the sediment delivery ratio that is a measure of the catchment´s efficiency in moving sediment from areas of erosion to the outlet. Large amounts of sediment are often stored before reaching the outlet and therefore we mapped the evolution of landforms in the proglacial zone.

Sediment yields were in the range of 1.5 to 16.7 × 104 t/yr and ca. 340 × 104 t of sediment were exported in the period 1956 to 2009 (fig. 2). If you imagine a truck with 20 t payload, you would need 170,000 trucks to carry the load away. It gets clear from figure 2 that sediment yield exhibits greater variability than discharge. This is because sediment yield is the product of sediment concentration and discharge and due to changing sediment concentrations and varying sediment supply, it is subject to greater variability than discharge (Fenn et al. 1985). The glacier serves as a source of sediment washed out by subglacial streams which in turn exhibit temporal and spatial variations. Consequently, the supply of sediment from the glacier to the proglacial zone is variable and not all of the sediment will make its way through the proglacial zone to be represented in sediment yield.

Figure 3 illustrates the withdrawal of the glacier and evolution of the proglacial zone in a series of maps. More than 785 × 10³ m² of proglacial terrain have been exposed by glacial retreat since 1953, of which 23 % is valley floor storage. At first, a proglacial lake developed that reached its greatest extent in 1979. The glacier receded from the lake and a braid plain with irregular hummocks, hollows and changing channel threads developed and the lake was rapidly filled to an outwash plain, a so-called 'sandur'. The spatio-temporal evolution of landforms clearly expresses the rapidity of glacifluvial sedimentation and thereby the changing sediment delivery ratio of the proglacial zone. Our interpretation on how this has affected sediment yield is summarized in figure 4. In the 1960s, the lake had a strong influence on sediment yield because it trapped a lot of sediment and caused the lowest yields. But propagating aggradation reduced the lake´s efficiency in trapping sediment and led sediment yields to increase in the 1970s and 1980s. Over time, this area of the proglacial zone shifted from a sink (lake) to a landform of variable sediment throughput (sandur). The very low channel gradient of the braid plain with many shallow water courses and the considerable amount of till in proximity to the glacier indicate a limited transport capacity of the meltwater stream and a low sediment delivery ratio of the braid plain. This, in turn, has affected the supply of sediment to the sandur and thus the amount of sediment that will make it through the sandur. As a result, sediment yield has continuously decreased in the 1990s and the first decade of the new millennium. In contrast, discharge has increased since 1980s as a result of higher temperatures.

Our study demonstrates that the proglacial zone affects sediment delivery from the glacier to the downstream fluvial system. The formation and aggradation of a proglacial lake has reduced the connectivity between glacial sediment production and downstream sediment fluxes. Span et al. (2005) located three additional basins under the tongue of the Pasterze glacier from ice-thickness measurements. Once these are exposed, the landscape evolution processes described above will repeat. Several studies reported the formation of proglacial lakes during the 20th century and there is evidence that it will become more frequent in the future. This is probably because many glaciers have receded in zones of converging ice flows where glacier-bed overdeepening is common. Linsbauer et al. (2012) computed a terrain model of the Swiss Alps 'without' glaciers and detected 500-600 overdeepenings capable of forming proglacial lakes. These findings suggest that impacts of climate change on sediment yield will include temporary interruptions of sediment transport. Scenarios of future sediment yield from any proglacial zone would depend critically on the potential development of a proglacial lake.

Acknowledgements
This work is part of an individual project of the University of Salzburg within the collaborative research project SedyMONT (Timescales of Sediment Dynamics, Climate and Topographic Change in Mountain Environments, ESF TOPO-EUROPE programme, cf. www.sedymont.sbg.ac.at). Financial support by the Austrian Science Fund (FWF): grant number I 157-N19 is gratefully acknowledged. We would like to express our warmest thanks to the Verbund Austria AG providing data on reservoir sedimentation and discharge.