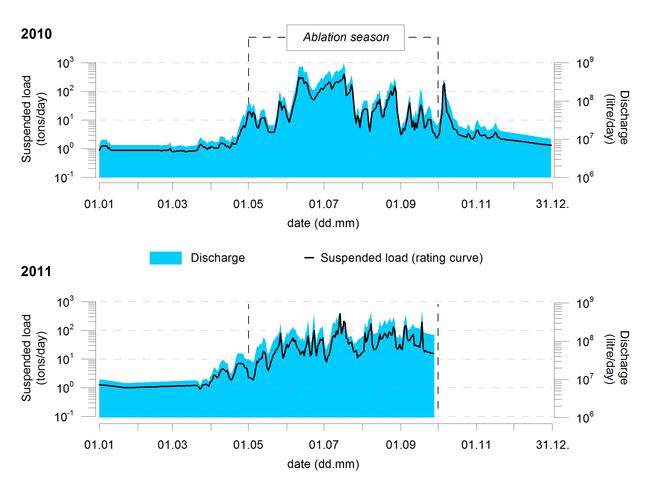 Figure 5. Suspended sediment loads depicted in tons per day and discharge displayed in litres in 2010 (top) and 2011 (bottom). Loads presented were computed from continuous 15 minute SSC and discharge records resulting in 15 minute loads (kg) which were summarized and converted to daily loads in tons. Rating curves were used to calculate a continuous record of SSCs from discharge (see fig. 3). During the 20 months of monitoring (January 1st 2010 to September 28th 2011), 18052 ± 210 t of suspended sediment were exported. Temporally, the majority was exported in the ablation seasons (May 1st to September 30th). Note that both axis of ordinates are log scaled.

Last Modified: 2013-03-02 09:34:41
Permanent URL: https://serc.carleton.edu/download/images/38974/figure_5.jpg
The file is referred to in 1 page
Provenance
Martin Geilhausen, Zurich University of Applied Sciences
Reuse
This item is offered under a Creative Commons Attribution-NonCommercial-ShareAlike license http://creativecommons.org/licenses/by-nc-sa/3.0/ You may reuse this item for non-commercial purposes as long as you provide attribution and offer any derivative works under a similar license.