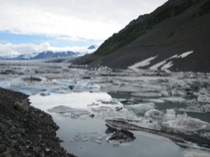 Figure 2. This is the lake that outbursts on Bear Glacier. Details 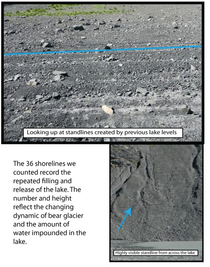 Glacial outburst floods (otherwise known as Jokulhlaups) have been important to the evolution of geologic thought; these floods continue to be important today because their frequency and occurrence may change as the Earth warms.

A key debate in geology is the catastrophism versus uniformitarianism debate, which began in 1850. Uniformitarianism is the concept that the earth's features formed slowly over long periods of time and the present is the key to the past. The mountain river you see today carrying sediment is slowly eroding the mountain and forming a valley, just as rivers of the past have. This perspective helped establish the concept of geologic time and altered early thinking that suggested only large catastrophic events shaped the world. The uniformitarianism approach led to an assumption that large catastrophic events do not play a role in altering the landscape. Uniformitarianism met its match with glacial outburst floods, an astounding example of the role catastrophism can play in shaping the earth both today and in the past. Catastrophism is the idea that rare, very large events can change Earth's surface rapidly and episodically.

A series of old shorelines mark many hillsides across western Montana and northern Idaho. Thick deposits of varved lake sediments (annual layers of lake sediments that are coarse and fine because input from rivers and melting glaciers lessen due to ice formation in the winter and increase in the summer) are also found throughout the valleys in this region. This combination helped T.C. Chamberlin to first identify features of the Glacial Lake Missoula Outburst floods.

Further west, in the area where the floods did much of their geomorphic work (erosion and deposition), J. Harlen Bretz was working and in eastern Washington he identified scablands (outcrops of basalt stripped of the loess that covered them and with many deeply eroded channels called coulees) (Figure 1). Bretz estimated that huge amounts of water would be needed to create one of the largest cataracts (Dry Falls, 3.5 miles wide and around 500 vertical foot drop).

In 1923, in his first paper identifying these features, Bretz described the features without a drawing a conclusion about their origin (Bretz, 1923a). When he presented his next paper he theorized that a catastrophic flood created these features (Bretz, 1923b). The suggestion that a huge flood catastrophically flooded a large portion of the western United States was controversial because it undermined the foundation of uniformitarianism. Despite papers defending the cataclysmic flood theory in 1927 and 1928, the larger geologic community continued to be skeptical in part due to the absence of the source of the flood (Baker, 2009). In 1940, at the American Association for the Advancement of Science, Joseph Thomas Pardee presented evidence for the rapid draining of Glacial Lake Missoula, located upstream of the scablands and published his evidence in 1942 (Pardee, 1942). Slowly people began to accept the catastrophic flood (Richmond et al., 1965) and in 1979 the Geologic Society of America awarded the prestigious Penrose Medal to Bretz for his work.

Although Bretz' hypothesis is no longer controversial, scientists are continuing to research Glacial Lake Missoula. Scientists accept that the scablands were the result of megaflooding (e.g. Baker, 1973) and that these floods occurred repeatedly (e.g. O'Connor and Baker, 1992). Current work using computer modeling is investigating how the water moved downstream and matching these reconstructions to field evidence in the scablands.

The size of glacial outburst floods is scaled to the amount of ice and water present. Glacial Lake Missoula was associated with the last ice age. Today, glacial outburst floods occur on a smaller scale due to smaller bodies of ice. At present, most glaciers are thinning or retreating as they react to changing climate. In 1971, Post and Mayo published a report identifying 750 glacially dammed lakes as part of a hazard analysis for the USGS. After thirty years of warming temperatures, (Wolfe, 2008) identified that 263 lakes in the Post and Mayo study were absent and 275 remained with an additional 141 lakes identified. This study demonstrates that glacial systems, specifically those with glacially-dammed lakes, are sensitive to changing climates and may provide information on a shorter timescale. In order to address how these lakes and glacial outburst flooding can further our understanding of larger scale climate change, we need to study individual glaciers.

For example, a lobe of Bear Glacier in Kenai Fjords National Park impounds a small lake that has drained twice on record, and likely more often (Figure 2). The glacier terminates in a lagoon. When the lake drains, a standing wave is created at the mouth of the lagoon. During our 2011 field season, the equipment we had placed in the lake in 2010 was stranded on the hillside, indicating the lake had drained, although not fully. Intense rain in the week prior likely triggered the outburst. Two possible mechanisms for failure are floating or fracturing of the ice dam. Larger volumes of water would make it easier to float the ice dam for the former mechanism or in the case of the latter cause increased pressure (Walder et al., 2005). Understanding how modern glacial outburst floods are initiated would aid in the understanding of historic glacial outburst flooding such as Glacial Lake Missoula.

During our field season, the lake that remained had numerous icebergs floating on the water. It is possible that as the volume of water in the lake decreased the pressure on the ice decreased, dropping the ice and cutting off the channel. We counted 36 old shorelines or strandlines on the adjacent slope indicating the lake has changed volume numerous times (Figure 3). Future work will continue to identify the volume of water necessary to cause the outburst and try to relate old shorelines with ice thicknesses.

The dynamic interplay between water and ice volumes involved in glacial outburst floods reflects the sensitivity of glacial systems to nuanced changes in climate and are spectacular events that alter the landscape around them in a short time. Repeated events reflect the changing dynamic of water and ice and may provide insight into the effects of global warming on glacial systems.

« Suspended sediment yield from an Alpine proglacial zone - quantification and controls       Challenges associated with investigations into the geomorphology of other worlds: A case study examining glacier-like forms in the mid-latitudes of Mars »