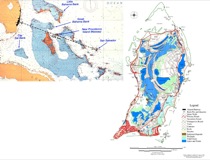 Hide
Figure 1: The map on the left shows the Bahamian Archipelago. The light blue areas indicate ocean depths of less than 15 m. At lower sea levels, these would all be exposed as islands. Note that San Salvador is on a very small platform. Details

Hide
Figure 2: The reddish surface is a Paleosol.It formed during a long period of low sea level when this was the land surface. The trade winds deposited layers of Sahara Desert dust that contained iron. Soils formed on these surfaces. The iron rich cement forms a hard, impermeable crust. Details

Hide
Figure 3: These are the basic chemical equations that show how Carbon Dioxide dissolves in water producing and acid. That acid, in turn, dissolves carbonate rock. Details 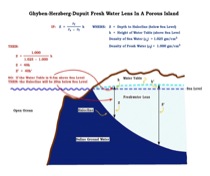 Hide
Figure 4: Density differences between fresh and salt water cause the development of a "fresh water lens" below most islands. The fresh water, infiltrating from the surface, "floats" on the salt water, depressing the boundary (halocline) in the same way that a floating block of wood depresses the water surface it is floating on. Details 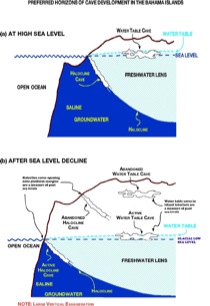 Hide
Figure 5: Caves will tend to form in mixing zones (a). These are found at the water table and at the halocline. As sea level rises and falls, these zones will move up and down and caves will form at different elevations (b). NOTE THE VERY LARGE VERTICAL EXAGGERATION. Details

Hide
Figure 6: Karst processes operate on both the surface and subsurface. This diagram shows the locations. It is keyed to pictures of some of these features shown in Figure 7. Details 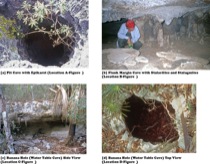 Hide
Figure 7: These pictures show examples of the different types of caves found on San Salvador. They are keyed to the diagram in Figure 6. Details 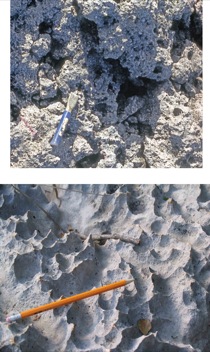 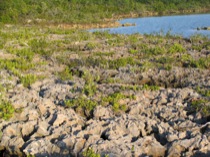 Hide
Figure 9: This extensive area of epikarst at "Moon Rock Pond" developed both from the top down (note the pitted surface where rainfall accumulated in pools) and from the bottom up from mixing of the salt water in the pond and the fresh rain water (note the dissolution beneath the surface especially near the shore). There is also a paleosol on this surface. (Godfrey, et al., 1994) Details

Hide
Figure 10: Because much of the rock surface is impermeable, water cannot infiltrate. Instead it collects in depressions and when it overflows it dissolves channels ("rills") leading to other depressions and ultimately to a pit where it can drain into the subsurface. Details 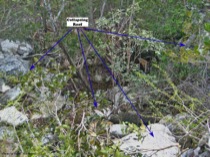 Hide
Figure 11: This is a water table cave ("banana hole") in the initial stages of collapse. Note the small opening in the middle of the picture and the slabs of rock surrounding it which tilt towards the center. Details 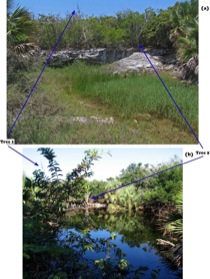 Hide
Figure 12: Sometimes banana holes can be quite large. This one is about 3 m deep, and about 20x30 m at the surface. The bottom is sealed by a paleosol. During the rainy season it fills to the brim and during the dry season it is completely empty. Details

INTRODUCTION
San Salvador Island is located in the Central Bahamas, about 225 km ESE of Miami and is about 12 km north to south and about 5 km east to west (Figure 1). It is notable for being Columbus' first landing site in the "new" world and there are five monuments to that event. Like all of the Bahamas, it probably sits on an isolated fragment of continental crust formed during the opening of the Atlantic Ocean. Slow subsidence coupled with the deposition of carbonates resulted in a stack of sediments that is probably more than 8000 m thick (Dietz et al.,1977). While most of the Bahamian Islands are part of large platforms (Figure 1), San Salvador sits on its own isolated platform whose boundaries plunge to depths of over 4000 m at angles up to 85°.

During the Pleistocene glaciations, sea levels changed considerably. They have been as much as 6 m above present (about 125,000 years ago) to about 125 m below (about 70,000 years ago). These fluctuations had a considerable impact on the size of many Bahamian islands. However, because of its steep-walled, isolated platform, the size of San Salvador changed little.

Over most of the past 2 million years, sea levels have been lower. During these times, dust, mostly from the Sahara Desert, accumulated on the islands. It hardened into a red soil (Paleosol) that may be impermeable (Figure 2).

KARST PROCESSES AND CHEMISTRY
"Karst" is the general term used for cavernous areas. Most karst regions are found on carbonate rocks. The basic geomorphic process is solution. The chemistry is shown in Figure 3. The acids produced by these processes are responsible for much of the dissolution in karst regions. Note, however, that temperature and the concentration of carbon dioxide in the atmosphere (including cave and soil atmospheres) control these reactions. This means that it is possible to produce saturated solutions with many different calcium and carbon dioxide concentrations. When two of these solutions mix, they produce an unsaturated solution which results in more rock dissolution in the zone of mixing (Palmer, 1991). Recently it has been hypothesized that bacteria may play an even more important role in solution than this mixing phenomena (Schwabe, et al., 2008).

ISLAND HYDROLOGY AND KARST
Figure 4 shows the ground water hydrology on a typical island. There are two distinct zones where waters with differing chemistry are mixing. The first of these is at the water table and the second is at the halocline (the fresh-salt water boundary). Bacteria may also be active in these places. Because of this, dissolution tends to be concentrated here, resulting in cave formation (Figure 5a). Changing sea level changes the dissolution loci resulting in caves at many different levels (Figure 5b). In addition to the mixing zones, dissolution also takes place at the surface ("Epikarst"). This produces pits large (up to 30 m deep) and small (mm scale).

KARST FEATURES AND PROCESSES ON SAN SALVADOR
The processes discussed in the previous paragraphs have all been active on San Salvador resulting in a wide range of features (Figures 6 and 7). Epikarst features include highly pitted surfaces (known as "moon rock" on San Salvador) (Figure 8) and deep shafts (Figure 7a). The pitted surfaces cover large areas of the island's interior (Figure 9). Rainwater charged with carbon dioxide lands on the bare rock and collects in small depressions. Dissolution enlarges these. Because the rock surface is impermeable, water does not infiltrate. Eventually the water begins to flow downhill until it reaches a spot where is can move down into the rock (Figure 10). Additional solution here may produce a deep pit.

Water table caves (Figure 7c and d) are usually shallow. Initially they form with no surface opening. However, dissolution of the rock both at the surface above the cave and within the cave itself eventually causes collapse. The resulting depression is locally called a "banana hole" (Figure 11) because the soils at the bottom are frequently fertile and good for growing bananas. These caves and holes can be quite numerous. On one part of the island, densities reach 2000 per square kilometer (Harris, 1997). Sometimes the banana holes are quite large and, surprisingly, drain poorly, perhaps because the bottoms are covered by paleosols (Gentry, 2005). During the rainy season, these can become deep pools (Figure 12).

Flank margin caves form along the margin of the island under the flank of a ridge where the halocline and the water table merge (Mylroie and Carew, 1990) (Figure 4). The most intense mixing takes place here and the proximity to the surface means that bacteria may also be abundant (Schwabe, personal communication). The result is aggressive dissolution. The caves form with no opening to the surface. Subsequent cliff retreat may expose them as may collapse of the roof. Because of high modern sea levels, most caves of this type are now well underwater and inaccessible. However we can explore those formed at the highest sea level stand (+6 m, 125,000 years ago) (Figure 7b). There are over 50 of these known and more are being found each year.