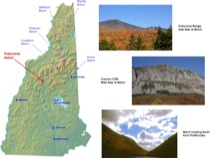 FIGURE 1: Franconia and other New Hampshire notches along with photographs of some Franconia Notch features Details 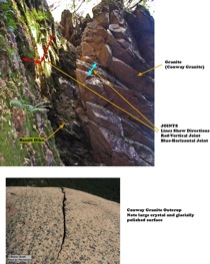 Hide
FIGURE 2: Most of Franconia Notch is underlain by the Conway Granite (bottom photograph). In places it is intruded by basalts which form dikes (top photograph). The granite is much more resistant to weathering and erosion than the basalt. Details 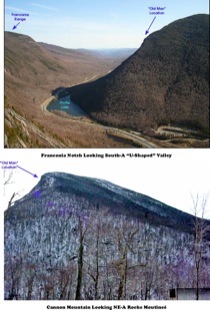 Hide
FIGURE 3: The top photograph is looking south into the Notch. Note its "U" shape. The bottom photograph shows the glacial sculpted shape of Cannon Mountain, a roche moutineé. Details 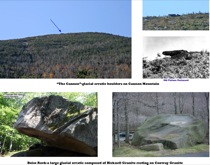 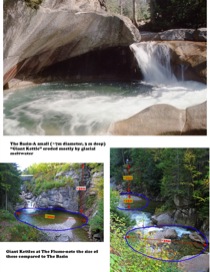 Hide
FIGURE 5: These show "Giant Kettles" which form when supra-glacial streams pour down through and opening ("moulin") in the glacier onto the underlying bedrock. The "kettle" is typically circular, steep sided and bell-shaped. Details 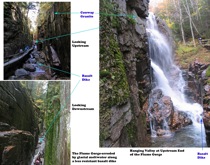 Hide
FIGURE 6: At The Flume, there is a long, about 2 m wide, basalt dike intruding the Conway Granite. Glacial meltwaters and post-glacial streams have preferrentially eroded this basalt forming a deep, narrow gorge. Where the main stream encounters the basalt, it forms a hanging valley and makes a right-angle bend to follow the dike (right photo) Details 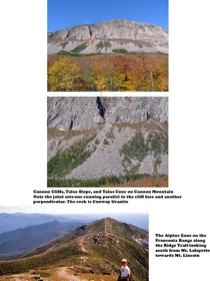 Hide
FIGURE 7: The upper two photos show the Cannon Cliffs where there has been extensive post-glacial mass wasting in the form of rock falls. The joint set that runs parallel to the Notch aids this process. The bottom photograph shows the above-tree-line alpine zone along the Franconia Range. Details 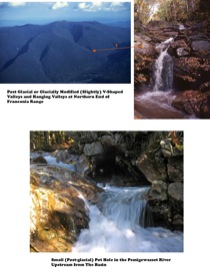 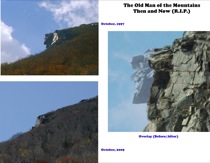 INTRODUCTION
Franconia Notch, New Hampshire (Figure 1) is a classic northern Appalachian glaciated valley. It has geomorphic features from pre-glacial times, from the glaciation itself, from glacial meltwater, and from post-glacial times. Because it is part of a state park with extensive tourist facilities, many of the features are easily accessible. This vignette will provide examples from each of these different geomorphic regimes.

PRE-GLACIAL GEOLOGY AND FEATURES
"Notch" is the Northern New England term for a deep, narrow valley that cuts through the mountains. Figure 1 shows the location of Franconia Notch and several others in New Hampshire. Geologically, New Hampshire consists of highly metamorphosed sedimentary rocks of early Paleozoic age and granitic rocks of Silurian, Devonian, and Jurassic ages (Goldthwait, et. al. 1987). These are intruded by small, Jurassic age basaltic dikes. The dominant rock unit in Franconia Notch is the Jurassic-age Conway Granite (Figure 2). It is a coarse grained, pink granite that in some places contains large feldspar crystals (Lyons, et al., 1997). Mountain building and uplift caused jointing and fracturing. The intrusive basalts followed these planes of weakness (Figure 2). Since granite is more resistant to weathering and erosion than basalt, the dike wears away forming a "slot". Prior to glaciation, this area already contained a southward flowing river. It would have occupied a deep valley through the mountains. The valley, the rocks, and the joints constitute the "framework" on which later geomorphic features been overlaid.

GLACIAL HISTORY AND GLACIAL FEATURES
The glacial history of the White Mountains is complex. Current thinking (Thompson, 1999) suggests that the ice advanced slowly and retreated quickly during the most recent glaciation. Alpine and valley glaciers, which are responsible for many of the large scale erosion features seen in the Notch, may have formed prior to the continental ice covering the entire region. Deciphering this history involves detailed examination of glacial striations (scratches), glacial deposits, melt water deposits and much more.

The large scale features (Figure 3) are indicative of the story. The Notch itself is a "U-shaped" valley. The "U" refers to the shape of its cross-section. Valley glaciers deepen and widen pre-existing "V-shaped" (stream) valleys. As continental ice overrode the area, it tended to scour and flatten up-ice sides of hills and mountains while plucking and steepening the down-ice side (Figure 3). This is feature is called a "Roche Moutineé" ("sheep back rock"). They range from a few meters to the mountain-size shown here.

There are also many glacial erratics (boulders of one type sitting on top of bedrock of a different type) in the Notch (Figure 4). Two prominent ones are Boise Rock and The Cannon. The Cannon, which sits on top of Cannon Mountain, was almost certainly transported by the continental ice. Boise Rock could have been transported either by a valley glacier (as its source area is directly up the valley) or by the continental sheet.

Melting ice, during glacial retreat, generated huge torrents of meltwater. Typically glacial melt contains large amounts of sediment which can produce extensive abrasion of the underlying rock. A meltwater stream flowing on top of the ice ("supra glacial stream") frequently will plunge down a hole ("moulin") and impact the underlying bedrock. This produces a "giant kettle." The Basin is a classic, albeit small, one of these and other much larger ones (Figure 5), are seen along the Pemigewassett River near The Flume. The present-day river is far too small ("underfit") to have carved either its valley or the kettles.

The meltwaters will also exploit weaknesses in the rock such as the basalt dikes. This has happened at The Flume (Figure 6) where a small stream passes through a deep (~40-50m), narrow slot. Tributary streams, flowing on the Conway Granite, cannot cut as deeply and so are left "hanging", forming waterfalls as they enter the gorge (right photograph, Figure 6).

POST-GLACIAL HISTORY AND FEATURES
Following ice retreat, "normal" temperate zone geomorphic processes resumed in the valley while periglacial conditions persisted at high elevations. The ice left behind steep faces on the walls of the "U-shaped" valley, unstable under temperate conditions. The result is extensive rockfall and the accumulation of talus at the foot of the cliff. The upper two photographs in Figure 7 show the Cannon Cliffs, which are a spectacular example of these processes (and which are also one of North America's premier rock-climbing sites). High elevations today maintain almost artic conditions. The summits and ridge line (Figure 7 lower photograph) of the Franconia Range (forming the east side of the Notch) remain a treeless alpine zone with flora and fauna found otherwise 1000 km (or more) to the north (Miller and Spear, 1999).

New streams also formed at mid-elevations. These occupied pre-existing valleys or formed their own. These valleys are distinctly "V-shaped" (Figure 8 top left). They also may be "hanging" above the main valley floor producing steep cascades (Figure 8 top right). There are wonderful examples of these along the "Falling Waters Trail" in the Franconia Range. When the small tributary streams reach the valley floor, they may form potholes which appear to be small (1-5 m) versions of the giant kettles. These streams are not "underfit" since their valleys were not enlarged by the glaciers.

Finally, we must discuss Franciona Notch's most famous "resident", the Old Man of the Mountain (Figure 9). He was first noted by Europeans in 1805 and became the symbol of the state in 1945. The face itself was a product of the glaciers. It was part of the "plucked" side of the Cannon Mountain roche moutineé (Figure 3). Five blocks of Conway Granite formed the face. The chin block was crucial. It cantilevered out and supported the entire structure. The center of gravity was only 20 cm back from the tipping point. There was a space behind the block where ice and water could accumulate. Ultimately the granite here weathered to the point where it could no longer support the face and on May 3, 2003, concealed by fog, the "Man" fell off the mountain (Wunsch and Fowler, 2004).