At the ground level, NO2 is one of the precursor components that are combined in sunlight to create ozone. NO2 is a byproduct of combustion engines and is a key molecule in smog formation. In addition, NO2 when combined with other chemicals can be harmful to certain body processes.

These data can be used to teach or learn the following topics and skills in atmospheric chemistry, physical geography and environmental science. 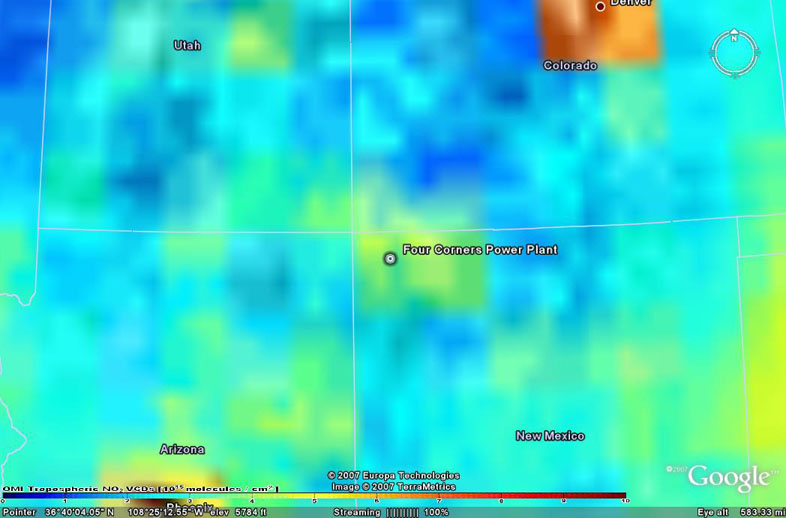 Geolocated data are processed and represented as graphic images in .kml file. Daily and Monthly averages are also presented in tab-delineated text files.

The NASA Aura satellite is a sun-syncronous Low Earth Orbit (LEO) flying over the whole surface of the Earth (14-15 daily orbits with a local overpass time of ~13:30) and has four atmospheric chemistry instruments (HIRDLS, MLS, OMI, and TES). The tropospheric NO2 measurements are derived from ultraviolet backscatter radiation measured by the OMI (Ozone Monitoring Instrument), a nadir viewing instrument with a ground swath of about ~13km*2600km (measured every 2 seconds in the sun exposed area of the globe). The OMI NO2 data production algorithm is designed to retrieve total vertical column densities of NO2 and separate stratospheric and tropospheric column densities using a spectral fitting technique (Differential Optical Absorption Spectroscopy, DOAS) to estimate the NO2 slant column density (SCD), which is the total NO2 density along the optical path (i.e., along the solar beam from the top of the atmosphere to the visible surface-cloud or ground-and then along the instrument's line-of-sight, back to the top of the atmosphere). The stratosphere-troposphere separation is achieved using a low-pass spatial filtering technique; the small gradient portion of the initial estimate of the total NO2 field is identified as the background stratospheric field. Measurements that exceed the constructed stratospheric field are taken to indicate significant tropospheric pollution. This separation is important because the chemistry of NO2 in the stratosphere is different from that in the troposphere. Also, accurate measurements of the tropospheric NO2 are significant for the characterization of air quality, a primary objective of the Aura and OMI missions.

The major sources of uncertainty in the tropospheric NO2 algorithm is the calculation of the Air Mass factor (AMF). The calculation of the AMF rests on certain assumptions, for example, concerning the overall shape of the NO2 vertical profile. It also rest on some other data sets, such as the OMI-derived cloud fraction and cloud-top pressure (currently using the oxygen dimer algorithm product), and the surface albedo.