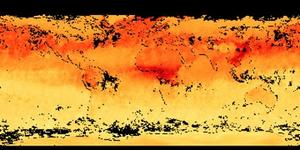 Feb 1, 2007 to Feb 28, 2007 carbon monoxide satellite image from NASA Earth Observations (NEO). Details.
The NASA Earth Observations (NEO) site provides data on global monthly averages of carbon monoxide. The data is acquired by the MOPITT (Measurements Of Pollution In The Troposphere) sensor aboard NASA's Terra satellite. The troposphere is the layer of the atmosphere closet to the Earth's surface, at an altitude of about 12,000 feet (3,600 meters). The range in color represents different concentrations of the CO, in ppbv(parts per billion by volume) in the troposphere. The light yellow color represents concentrations from 0 to approximately 100 ppbv. Orange represents concentrations from approximately 100 to 150 ppbv, and reds represent concentration over 150 ppbv. The darkest reds represent very high concentrations ranging from 250 to 300 ppbv.

NASA satellites gather vast amounts of data on planet Earth. Aboard the TERRA satellite, the MOPITT sensor is designed to enhance our knowledge and understanding of the lower atmosphere, called the troposphere. Of particular interest to Earth scientists are the interactions that occur between the troposphere and the land and oceans. Carbon monoxide plays an important role in these interactions, and originates from many common and widespread sources including vehicles, factories, and fires. Carbon monoxide affects the way the atmosphere cleanses itself. It forms smog when combined with other pollutants in the presence of sunshine. It also plays a role in the formation of ozone, a very harmful gas when concentrated in the lower atmosphere. By monitoring carbon monoxide concentrations in the troposphere, Earth system scientists are learning more about how Earth is changing.

This data can be used to teach or learn the following topics and skills in introductory Earth science:

The raw carbon monoxide data from the MOPITT sensor has been processed to represent monthly average carbon monoxide concentrations in parts per billion by volume (ppbv). The data are presented as graphic images in JPG, PNG, GeoTIFF and Google Earth formats. Images are from June 2007, that represent summer conditions in the northern hemisphere. Images are also available for the months of March 2000 through the present. The images are 8-bit, geographic (lat/long, WGS 84), single-band datasets that are 1 MB in size (1440 x 720 pixels).

The NEO interface makes it very easy to access data. From the NEO home page, users click on the 'Atmosphere' tab, and draw-down to the Carbon Monoxide (MOPITT) choice. From there, they can select the month of interest.

Using the Image Composite Exploration (ICE) tool under the Analysis tab, users can create a wide range of graphs and charts. For example, the data from two satellite images can be compared directly by plotting a transect (plotting data along a path) across an area of interest, creating a graph of data values along the transect. If a summary (an average) of the data in a particular area is desired, users can create polygon and the mean value within the polygon is then instantly calculated. Scatter plots and other 2- and 3-dimensional graphics are easily created.

NEO offers a variety of data exploration and analysis tools including simple visual exploration, visualization of graphical displays of the data, mathematical combinations of two or three data sets, and time-series animation. These capabilities exist within the ICE Tool which can be accessed from the NEO homepage by first selecting images with the same temporal resolution (same month) then clicking on the Analysis tab. Users do not have to leave the site to explore, plot, or analyze their data.

"MOPITT is the first satellite sensor to use gas correlation spectroscopy. The sensor measures emitted and reflected radiance from the Earth in three spectral bands. As this light enters the sensor, it passes along two different paths through onboard containers of carbon monoxide and methane. The different paths absorb different amounts of energy, leading to small differences in the resulting signals that correlate with the presence of these gases in the atmosphere. MOPITT's spatial resolution is 22 km at nadir (straight down) and it 'sees' the Earth in swaths that are 640 km wide. Moreover, it can measure the concentrations of carbon monoxide in 5-km layers down a vertical column of atmosphere, to help scientists track the gas back to its sources."2 "The MOPITT Level-2 carbon monoxide data product consists of the geolocated, retrieved carbon monoxide profiles and total column amounts for carbon monoxide and methane. The horizontal footprint of each MOPITT retrieval is 22 kilometers by 22 kilometers. Ancillary data concerning surface properties and cloud conditions at the locations of the retrieved parameters are also included. MOPITT geophysical parameters are derived from the Level-1B radiances in combination with ancillary data describing the global distribution of surface and atmospheric temperature and humidity."1 "Radiance measurements in the 4.7-micrometer carbon monoxide band provide the primary information on the vertical carbon monoxide mixing ratio profile in the troposphere. Total column abundances of carbon monoxide and methane are derived primarily using measurements of reflected solar radiation in 2 bands near 2.3 micrometers, and best retrievals thus occur in sunlit portions of the orbits. Clouds have a large influence on the observed radiances and their effects must be modeled appropriately in the retrieval algorithms."

Measurement of Pollution in the Troposphere (MOPITT)