Part 1: Straws in the Colorado River: Will We Run Out of Water?

To begin your tree-ring science expedition to the Colorado River Basin, you will investigate its physical characteristics and learn how the water is used and apportioned by those who live there. The river stretches 1,450 miles from the Rocky Mountains to the Gulf of California in Mexico. Originally a wild and untamed river, manmade dams, dikes, and canals were constructed over time to control manage it. The river supplies the following resources and activities enjoyed by 15 million people a year:

Without the water of the Colorado River, Las Vegas, Nevada would be a mostly uninhabited desert area, San Diego, California (which gets 70% of its water from the Colorado), could not support its present population, and California's Imperial Valley (which grows a major portion of the nation's vegetables) would consist mostly of cactus and mesquite plants.

Numerous studies over the last 30 years have indicated that the Colorado River is likely to experience reductions in runoff due to changes in the water cycle caused by increasing global temperatures. In addition, the amount of water diverted from the river to meet the needs of cities and agriculture continues to grow. Under current conditions, even without climate change, large year-to-year fluctuations in reservoir storage are possible. Look at the two images below. What changes in water level can you see took place during different seasons? 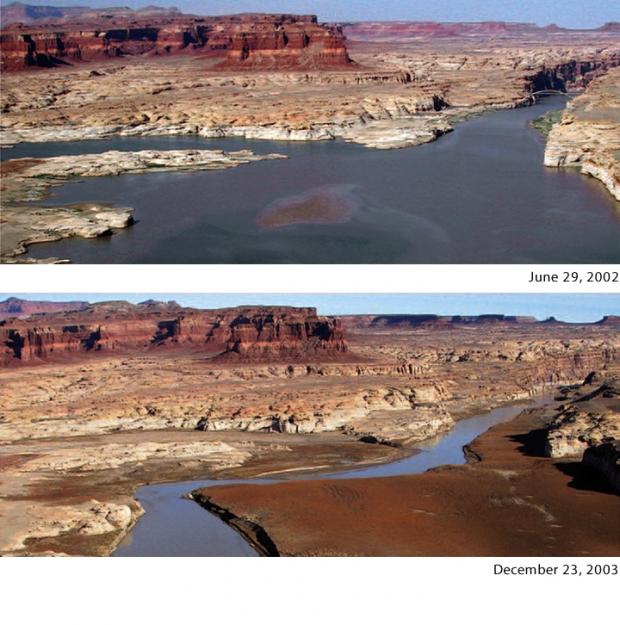 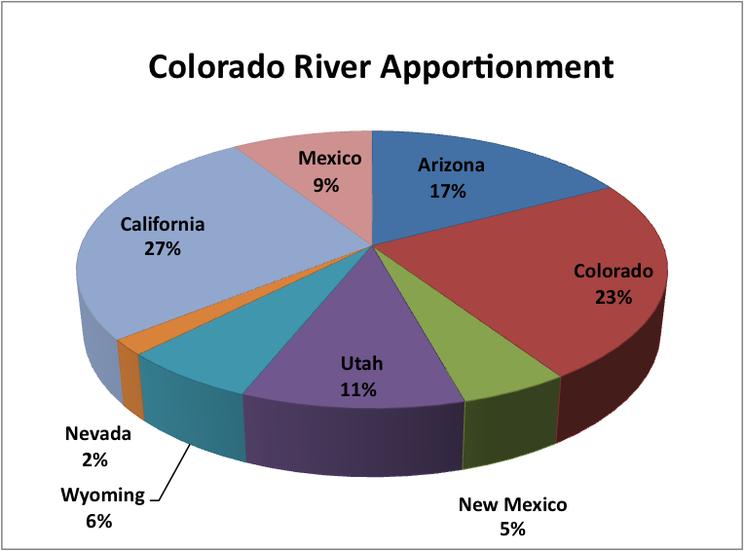 During the early 1900s, the states sharing the basin debated for shares of the Colorado River. In 1922, representatives from the seven states and the United States government created a compact allocating 15 million acre-feetis a unit of volume equal to the volume of a sheet of water one acre in area and one foot in depth; 43,560 cubic feet of water to be shared by the states.The Colorado River Compact, divided the states into upper and lower basins with provisions of 7.5 million acre-feet to be split among the states within each basin. The boundary between the basins is at Lee's Ferry just below Glen Canyon Dam. In 1928, the Boulder Canyon Project Act revised specific water provisions for the lower basin states of Arizona, California, and Nevada. Specifically, California would receive an annual allocation of 4.4 million acre-feet; Nevada 300,000 acre-feet; and Arizona 2.8 million acre-feet. Look at the Colorado River Apportionment diagram above. What two states take a full half of the available Colorado River water each year?

Due to the decreased amount of water available over the past two decades, a new agreement was reached in 2007. This 2007 interim drought agreement has limited water use to 7.05 million acre-feet per basin until 2026. This agreement assumes that the drought is a temporary condition, or that a new agreement can be reached if in fact the drought worsens.

In this activity, you will take a journey down the Colorado River to give you perspective on the scope of the watershed and how various stakeholders have siphoned the water from the river to serve seven western states' needs. Then you will collect data concerning where the water comes from, who is using the water and how much they are using.

1. Take a Journey Down the Colorado River.

Right click on the The Colorado River: Running Nearly Empty video by Pete McBride and open it in a new window. Answer the Stop and Think questions below.

1.1 Where did the writer and photographer begin their journey?

1.2 What did Pete McBride mean by "straws drinking out of the river"?

1.3 What is the state of Colorado's dilemma regarding rainfall and the Rocky Mountains?

1.4 What mode of transportation did the writer and photographer use to get to the mouth of the Colorado River at the Sea of Cortez?

2. Where Does the Water Come From?

As you have seen, the Colorado River headwaters are in the foothills of the Rocky Mountain. Winter snow melts and supplies runoff to the various tributaries of the river system. Below are two graphs: The average depth of the snowpack in the Colorado Rockies and the average stream flow at Lee's Ferry in Arizona. Look for relationships between the two plots and then answer the Think About it questions. 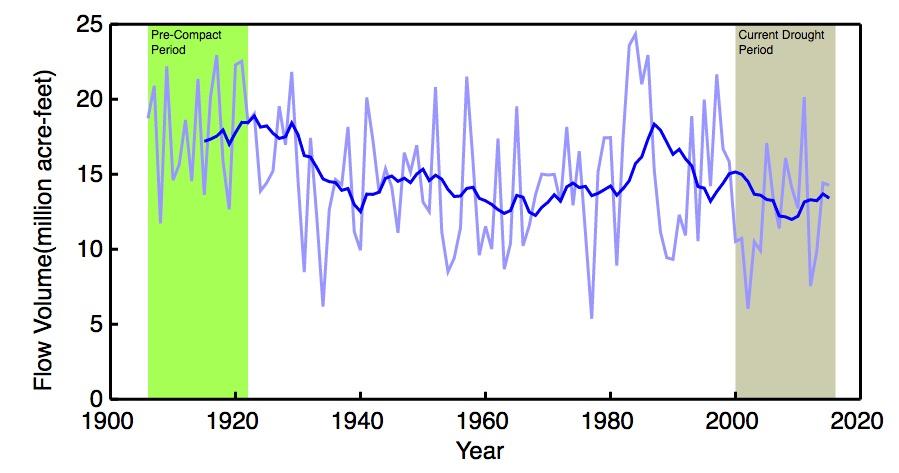 ×
In the graphic above, the light blue line shows the annual values of the recorded streamflow data at Lees Ferry. The dark blue line shows the 10-year average flow based on that data. The green shaded area shows the amount of data that was used to determine how to share water resources for the Colorado River. The most recent drought for the 2000-2015 period (indicated by the brown shaded area) was the driest 16-year period in the past 100 years and one of the driest 16-year periods in the past 1,200 years. Credit: NOAA https://www.doi.gov/water/owdi.cr.drought/en/

1.5 How do the long-term trends of the two graphs compare?

1.7 What three years had the lowest flow volume in the Colorado River?

3. Explore who is using the Colorado River water and how much they are using.

4. Supply and Demand: Will there be enough water to use in the future? 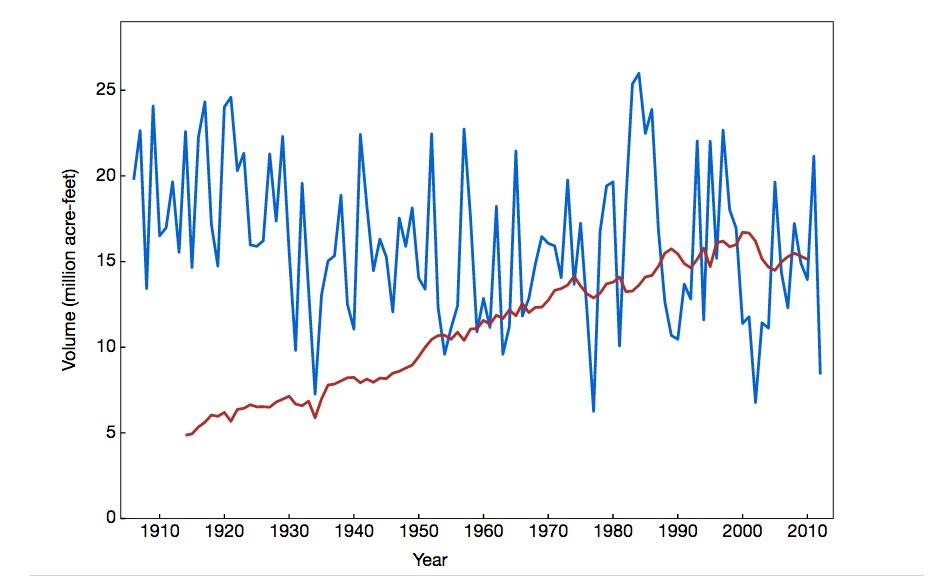 Trends in water supply and water use in the Colorado River Basin are shown above. When water use (red line) exceeds water supply (blue line) in a given year, the amount of water stored is reduced. During the past 20 years, average water supply and average water use have been about equal. Under these conditions, reservoirs are replenished more slowly. Water-supply and water-use data shown in the graphic above are estimated by the Bureau of Reclamation using water accounting information, U.S. Geological Survey stream-gauge data, and other sources.

1.8 List the top five holders and their % water usage. Which holder uses the most water compared to the extent of its geographic area?

1.9 How much of the total water available from the Colorado do the top five holders use? How much water is left for all the other holders?

1.10 What was the difference between water used and water supply in 1922 when the Colorado Pact was signed?

1.11 What was the difference between water used and the total water available in 2002?

1.12 Give two reasons that you think would account for the rising demand for water in the Colorado River Basin.