Lab 2 - Humpty Dumpty and Drought in the Hudson Valley, NY 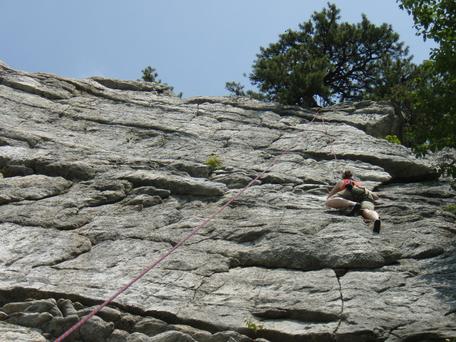 ×
Women climbing on "the Gunks"

This tree-ring science expedition takes you to a fascinating landscape in New York State. The Shawangunk Ridge, which includes Mohonk Preserve and nearby Minnewaska State Park, is a remarkable natural area. Glacially-sculpted sandstone ridges result in an incredible and unique landscape. A rich human history and many outdoor activities await visitors. This region, often referred to as "The Gunks," is also renowned for rock climbing, hiking, and biking.

In one area, a talus rock fragments that have accumulated at the base of a cliff or slope slope made of giant sandstone and conglomerate boulders is home to a forest of hemlock trees that have been growing since the 1600s. Because the terrain is so rocky and the trees so difficult to access, these trees were never logged or destroyed by fire. Most of the old trees in the US northeast were cut long ago for fuel or cleared to make room for agriculture. More recently, invasive woolly adelgids small aphid-like insects that suck the sap from young twigs of hemlock, spruce, and fir trees. This prevents tree growth and causes needles to drop prematurely have been literally sucking the life and sap out of the region's hemlocks.

Why do these trees matter? 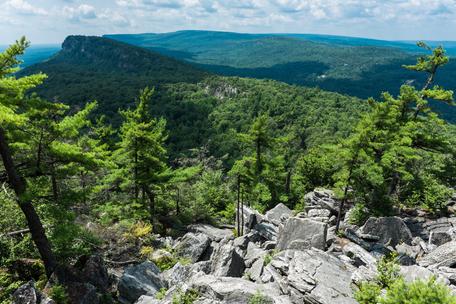 Provenance: nicole davi, William Paterson University of New Jersey
Reuse: This item is offered under a Creative Commons Attribution-NonCommercial-ShareAlike license http://creativecommons.org/licenses/by-nc-sa/3.0/ You may reuse this item for non-commercial purposes as long as you provide attribution and offer any derivative works under a similar license.

These hemlock trees are particularly interesting to scientists and were first studied in the 1970s. They are some of the best examples of drought-sensitive trees in the U.S. Northeast. Prior to the 1970s, tree-ring studies were common only in the U.S. Southwest, where the science of using tree rings to describe past climate began. The old-growth hemlock trees in the Humpty Dumpty talus slope site proved that trees in the U.S. Northeast could capture drought information in their rings as well. They became the catalyst for developing more drought sensitive tree-ring studies across the region. 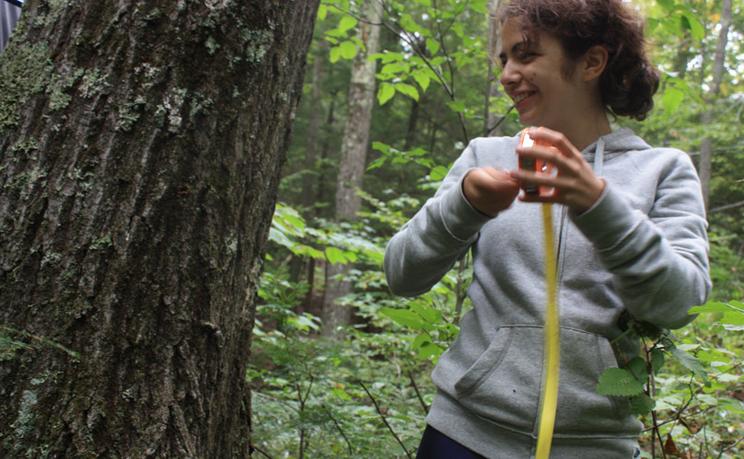 ×
Ana Gonzalez collects data on a forest near the Humpty Dumpty site. Ana was an intern at Lamont-Doherty Earth Observatory's Tree-Ring Lab and is now a Ph.D. student at Harvard! Credit: Neil Pederson

Provenance: nicole davi, William Paterson University of New Jersey
Reuse: If you wish to use this item outside this site in ways that exceed fair use (see http://fairuse.stanford.edu/) you must seek permission from its creator.

The setting of this virtual lab is the Mohonk Preserve of Upstate New York, where you will learn some history of the area and how the tree-ring research here began. After exploring the Humpty Dumpty talus slope site using Google Maps, you'll gather data and evaluate the tree-ring core samples and analyze your data to determine the nature of paleoclimatea climate prevalent at a particular time in the geological past in the Northeast.

You will learn about how scientists work in the field and collaborate to search for clues to determine what past climate was like in this region. You will see how tree cores are produced using an increment borer and you will evaluate the ring patterns in a series of cores collected on the site.

To complete the lab, you will use an online tool called "Climate Explorer" to look at recorded drought data from the Mohonk Preserve region, and map it. Then you will compare the wet and drought years that you found in the tree-ring record in Part 2 to recorded meteorological data you found in Part 3 to see for yourself how well the trees capture drought events.