"If students hold stereotypes that portray scientists as a different 'kind of person' than themselves, those students might conclude they are not 'science people.' This mismatch between a student's personal sense of identity and a science identity can hamper persistence in STEM." 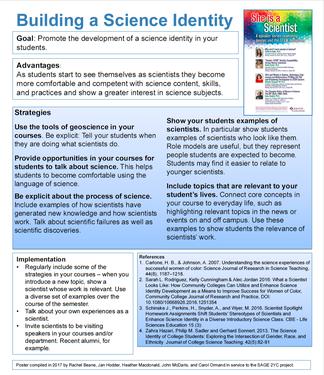 Provenance: Poster compiled in 2017 by Rachel Beane, Jan Hodder, Heather Macdonald, John McDaris, and Carol Ormand in service to the SAGE 2YC project.
Reuse: This item is offered under a Creative Commons Attribution-NonCommercial-ShareAlike license http://creativecommons.org/licenses/by-nc-sa/3.0/ You may reuse this item for non-commercial purposes as long as you provide attribution and offer any derivative works under a similar license.

Every individual encompasses multiple identities. When students are considering their future careers and educational pathways, one of the factors involved in their decisions is whether or not they can align their perception of a career with one or more of their personal identities. If they cannot see "someone like them" (whatever that means to them) doing a job, it is less likely that they will follow that particular path (Margolis and Fisher, 1997). Indeed, having a strong science identity is one of the only good predictors of moving into a science-related career field after graduation (Stets et al., 2017).

Studies have shown this to be a significant factor in the lack of diversity in STEM fields (Carlone and Johnson, 2007; Hurtado et al., 2009; Zahra et al., 2013). Even though some progress has been made in recent decades, these fields continue to be dominated by white, cis-gendered males which can make it hard for other kinds of students (people of color, women, gender-nonconforming, etc.) to see a place for themselves in STEM. In addition, many students do not come from families or communities where they were exposed to role models from the sciences.

Faculty can help students develop a Science Identity by showcasing examples of scientists who do not fit common stereotypes, helping students see scientists as whole people they can relate to, giving students opportunities to practice doing and talking about science, and highlighting content topics that are relevant to students' lives.

Jump Down To: Practice Doing Science | Highlight Topics' Relevance to their Lives 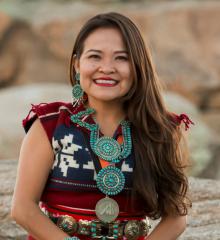 ×
Dr. Karletta Chief is an assistant professor and extension specialist in the Department of Soil, Water, and Environmental Science at the University of Arizona. In her extension specialist work, she brings relevant science to Native American communities in a culturally sensitive manner by providing hydrology expertise, transferring knowledge, assessing information needs, and developing applied science projects. Dr. Chief is Dine, originally from Black Mesa, AZ.

Resources you could use:

A powerful way to help students see a place for themselves in STEM is to feature scientists who, collectively, present diverse examples of who scientists are and how science is done (Schinske et al., 2016). Explicitly show diversity in your teaching. Use a diversity of people in the images included in presentations. Showcase the work of non-white geoscientists when appropriate in your courses. Use both historical and modern day examples of diverse individuals. Beyond visual diversity, also include descriptions of scientists as people. Their interests outside of science and pathways they took to where they are (particularly if part of that pathway included time at 2YC) can show students that people in STEM are much more than one-dimensional characters they are often portrayed as.

Schinske et al (2016) discuss the use of Scientist Spotlights as a tool for increasing students' ability to relate to scientists. This activity pairs profiles of diverse examples of scientists with relevant content areas covered in a class distributed throughout the length of the course. For each homework assignment, students read an article about the scientist's research and a resource about the scientist's personal history. Their study concluded that this activity generated shifts in students' stereotypes of scientists and scientist relatability. Students began to be able to see "scientist" as a possible part of their self concept because they were able to understand real scientists as complex people interested in many things.