SAGE Musings: Women and Minorities in Science and Engineering

There's a lot of talk these days about the importance of broadening participation in the STEM disciplines (science, technology, engineering and mathematics). But how much of a problem is there, and how do the geosciences compare to other STEM fields? What subpopulations are under-represented in the geosciences? How under-represented are they? As Huntoon and Lane noted (2007), citing data from the National Science Foundation, "graduates from bachelor's, master's and doctoral degree programs in the geosciences have lower ethnic and racial diversity than do graduates from any other science, technology, engineering, and mathematics (STEM) field." Moreover, the racial and ethnic diversity of people earning geoscience PhDs in the U.S. has not improved since 2004 (Sidder, 2017). Likewise, while women make up more than half of the undergraduate student population, we earn far fewer than half of the undergraduate degrees in STEM disciplines (NSF, 2017) and we comprise only 23% of the geoscience workforce (Sidder, 2017). 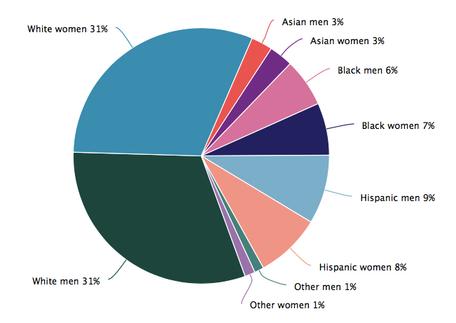 Provenance: National Science Foundation. Available at https://www.nsf.gov/statistics/2017/nsf17310/digest/introduction/.
Reuse: This item is in the public domain and maybe reused freely without restriction.

Demographics of the U.S. Population, 2014

In 2014 (the most recent year for which I could find data), the U.S. population between the ages of 18 and 64 was 62% White, 17% Hispanic, 13% Black or African-American, 6% Asian, and 2% all other racial and ethnic groups combined (including, for example, American Indians, Alaska Natives, Native Hawaiians, other Pacific Islanders, and individuals who report more than one race and are not Hispanic) (NSF, 2017). Of course, student populations differ from the overall U.S. population, whether you consider specific institutions or the student population as a whole. In general, however, undergraduate student populations are becoming more diverse. "Most notably, underrepresented minorities, Hispanics in particular, are an increasing fraction of undergraduate students, and whites are a decreasing fraction. In all racial and ethnic groups, more women than men enroll in college" (NSF, 2017).

Racial and Ethnic Diversity in Science and Engineering, 2014

People who identify as Hispanic, Black or African-American, Native Americans, Pacific Islanders, or multi-racial constitute about one-third of the U.S. population, and are under-represented minorities in the STEM disciplines. What we mean when we say that they are under-represented in STEM is that there are disproportionately fewer members of each of those groups earning degrees and joining the workforce in STEM than in the population as a whole.

×
Percentage of degrees earned by students from under-represented minority populations, 2014. Data from NSF, 2017.

Provenance: National Science Foundation. Data available from https://www.nsf.gov/statistics/2017/nsf17310/data.cfm.
Reuse: This item is in the public domain and maybe reused freely without restriction.

I did some data mining to find out how under-represented people from these minority groups are in the science and engineering educational pipeline, and also how under-represented they are in the geosciences educational pipeline. I used the data from the National Science Foundation's National Center for Science and Engineering Statistics (NSF, 2017). When I needed to calculate percentages myself, I did not include students NSF describes as "other or unknown race and ethnicity" and I only included students who are U.S. citizens or permanent residents. In these data, the geosciences include atmospheric, earth, and ocean sciences. You can see what I found in the table to the right. The number that I keep in mind as a comparison for all of these figures is 1/3: under-represented minorities (URMs) constitute one-third of the U.S. population. The extent to which URMs are earning fewer than 1/3 (33%) of the degrees in geoscience is the extent to which they are under-represented in the geoscience educational pipeline.

Women in Science and Engineering, 2014

Provenance: National Science Foundation. Data available from https://www.nsf.gov/statistics/2017/nsf17310/data.cfm.
Reuse: This item is in the public domain and maybe reused freely without restriction.

Women make up half of the U.S. population, and more than half of the student population. To the extent that women earn fewer than half of the degrees in the geosciences, or in science and engineering more generally, we are under-represented in those fields. I'll let the numbers speak for themselves. Once again, the data for this chart comes from NSF's National Center for Science and Engineering Statistics (NSF, 2017).

One interesting thing I learned from these data is that women earned more than half of the Masters and Doctoral degrees in the ocean sciences in 2014: 57% and 56%, respectively. Of course, that means that we are even more under-represented in the atmospheric and earth sciences than in the other science and engineering fields. Moreover, as I mentioned earlier, we comprise only 23% of the geoscience workforce (Sidder, 2017) -- clearly, many of us are earning degrees in the geosciences but not entering the workforce. Exploring this phenomenon within academia, Mary Anne Holmes and Suzanne O'Connell considered the question, "Where Are the Women Geoscience Professors?" in a workshop and related publication in 2003. As they explained in the preface of their report, "When we graduated with a cohort of 20 percent female students 30 years ago, we thought that by this stage of our careers we would not be asking, 'Where are the women geoscience professors?' " (Holmes and O'Connell, 2003). At that time (2003), women represented only 13% of geoscience faculty and instructors.

When I was working on my PhD in the 1990's, I though that the under-representation of women in the geosciences would go away as my classmates and I progressed into the geoscience workforce. Nevertheless, it persists.

Holmes, Mary Anne and Suzanne O'Connell, 2003. Where are the Women Geoscience Faculty? Available at http://eas2.unl.edu/~mholmes/images/Where%20are%20the%20Women%20Geoscientists.pdf.


Comment? Start the discussion about SAGE Musings: Women and Minorities in Science and Engineering