What is Primary Productivity?

Primary productivity is the process by which organisms make their own food from inorganic sources. The majority of primary producers are terrestrial plants and microbial life, such as algae. These organisms are known as autotrophs, since they can use inorganic substrates and solar energy to carry out metabolic processes and build cellular material. Primary productivity due to photosynthesis is commonly measured by quantifying oxygen production or CO2 assimilation. 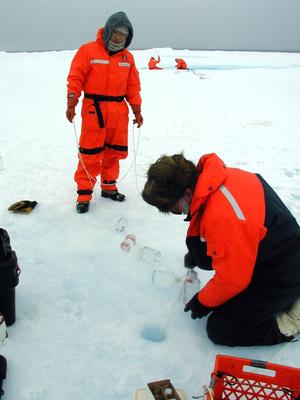 How Does This Method Work?

The theory behind using 14C to measure productivity involves using a labeled tracer to quantify assimilated carbon. The 14C method estimates the uptake and assimilation of dissolved inorganic carbon (DIC) by planktonic algae in the water column. The method is based on the assumption that biological uptake of 14C-labelled DIC is proportional to the biological uptake of the more commonly found 12C DIC. In order to determine uptake, one must know the concentration of DIC naturally occurring in the sample water, the amount of 14C-DIC added, and the amount of 14C retained in particulate matter (14C-POC) at the end of the incubation experiment. A 5% metabolic discrimination factor may be applied to the data as well, since organisms preferentially take up lighter isotopes. Carbon uptake can be measured by the following equation:

How To- Sample Collection, Protocol, Analysis, and Considerations

There are several protocols for measuring rates of primary productivity via 14C. The basic idea remains the same: before dawn, water samples are collected in a series of bottles- generally two clear and one amber/dark colored bottle through which light is not able to penetrate. The water samples are inoculated with 14C, capped, and placed in the environment they were collected from for a day (this time may vary). Following the incubation, the samples are collected under low light conditions and filtered through a 0.2um filter. The filter is placed into a liquid scintillation vial, acidified to purge excess 14C, and kept cold until it can be analyzed in a scintillation counter.

Considerations:
The 14C method for measuring productivity has several important considerations, including:

Rates of primary productivity can range from 0-9000 kcal/m2/yr, with desert regions having lower rates and estuaries having higher rates (see The Flow of Energy: Primary Production to Higher Trophic Levels for more details). More constrained rates of primary productivity for specific environments may be researched by looking at primary literature for a specific site.