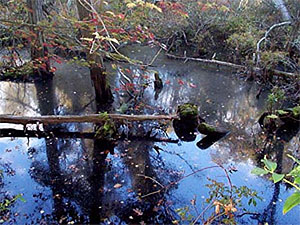 [hidden 'credits']Hidden Swamp is located in Woods Hole, MA, and is adjacent to stands of forest on all sides. Despite inputs from runoff, this swamp is still considered healthy. The cedar trees are still reproducing and the ground level is dominated by Sphagnum. This image was provided by the Woods Hole Swamp Research Center and the microscope web site.

Atlantic White Cedar Swamps are found in a narrow band along the eastern coastal United States ranging from Mississippi to Maine. They are catastrophe-dependent environments (see below) characterized as having water that is shallow, dark, saturated, low-nutrient, and generally acidic (Laderman, 1989). As you can imagine, the microorganisms living here must be fairly adaptable to extreme conditions. Unfortunately, there is relatively little to no detailed research about the microfauna of this extreme habitat. In this WebQuest, you will combine your skills as a creative writer and biologist to bring these microbes to life. Through the art of storytelling, you will bring awareness to Atlantic White Cedar Swamps and increase our understanding of the microbial world.

Hide
Atlantic white cedar is an invasive species by nature. While catastrophes such as fires, storms, and logging may repeatedly level such a forest, this tree will return again and again. Without catastrophes to repeat the process of invasion, species such as the red maple and tupelo will in turn become invaders and the seedlings of Atlantic white cedar will eventually fail to grow in the deep shade. (adapted from Glen Kaye, Cape Cod National Seashore)